1749 Vaugondy Map of the Great Lakes and New England 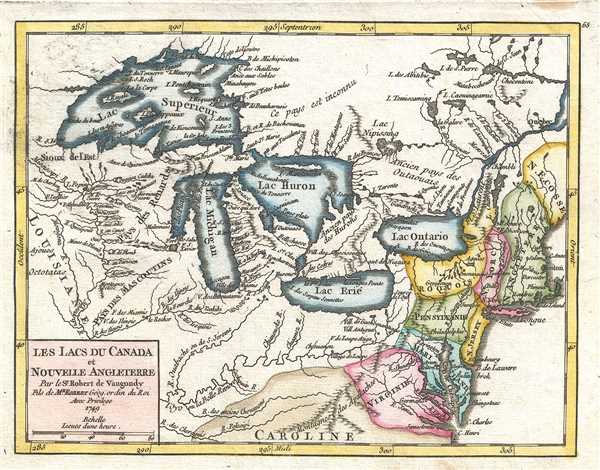 1749 Vaugondy Map of the Great Lakes and New England

Attractive hand colored map of the Great Lakes and the American colonies issued just prior to the French and Indian War.

This is a hand colored 1749 Didier Robert de Vaugondy map of the Great Lakes on the cusp of the French and Indian War (1754 – 1763). The organization of the map is significant, with the French controlled Great Lakes dominating the map. The English colonies, which are disproportionally reduced, hug the coast but, save through their alliance with the Iroquois federation, have no access to the Great Lakes. Similarly, Pennsylvania, Virginia and Maryland are limited to lands east of the Appalachian Mountains, reflecting the French claims that would soon lead to war.

The map depicts from the middle of the United States, which Vaugondy refers to as Louisiane on the left to the Eastern Seaboard of the United States, then the colonies and from Canada, just north of Lake Superior south toe the Carolinas. This map is highly detailed. It depicts some of the American colonies, though not all thirteen. New England, New York, Pennsylvania, Maryland, New Jersey, Maryland, Virginia, and Carolina are labeled. New Scotland is labeled to the north of New England and the Iroquois nation is colored, giving the impression that New Scotland and the Iroquois nation are part of the American colonies, reflecting an important Indian alliance. Large cities, such as Quebec, Montreal, Philadelphia, Boston, and New York are labeled, as well as all five of the Great Lakes: Superior, Michigan, Huron, Erie, and Ontario.

Numerous river systems are depicted, including the Mississippi. The Appalachian Mountains are depicted. Several Native American tribes are identified on the map, including the Huron and Sioux. Northern Canada, however, is noted solely as 'ce pays est inconnu' or 'unknown country'.

This map was published by Gilles Robert de Vaugondy in his Atlas Universel, Portatif et Militaire in the 1748 edition.