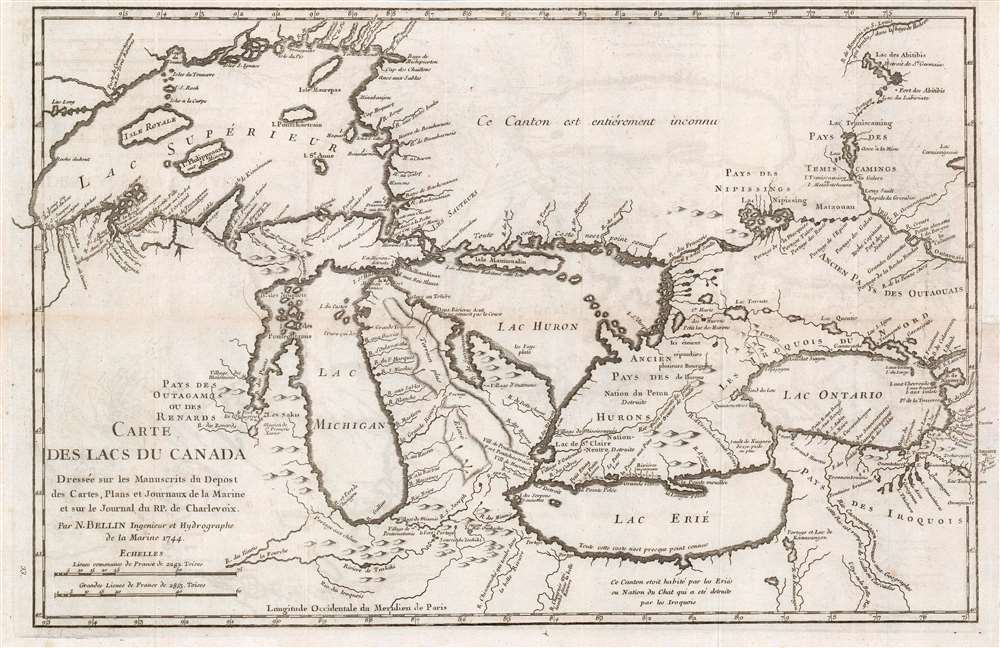 This is the 1744 Bellin / Charlevoix map of the Great Lakes, the most accurate map of the Great Lakes to date and the best produced since the De l'Isle map of 1718. It is also the earliest obtainable map, preceded only by a 1742 proof noted by Kershaw, to depict the four fictive islands in Lake Superior (Philippeux, Pontchartrain, Maurepas, and St. Anne) - islands that nonetheless significantly influenced the structuring of post-Revolutionary War borders between British Canada and the fledgling United States. It is also notable for being among the earliest maps to identify Detroit and the Port of Chicago. Bellin's map covers all five Great Lakes and their adjacent drainage systems in considerable detail, noting known fortifications, American Indian villages, missions, and some speculative topography (particularly in Michigan).

Bellin prepared this map to be included in Pierre Francois Xavier de Charlevoix's (1682 - 1761) 1744 Histoire et description generale de la Nouvelle France, one of the most comprehensive works on North America predating the French and Indian War. Charlevoix was a Jesuit missionary and traveler commissioned by the French Crown and the Duke of Orleans to explore French holdings in the Americas, and this he did - although in this case the map is based upon manuscripts compiled by Gaspard-Joseph Chaussegros de Lery (1721 - 1797), a French Canadian military engineer active around Great Lakes region in the early 18th century.

The Isles of Lake Superior

Despite Lake Superior having been avoided entirely in Charlevoix's visit to North America, the omission did not prevent the Jesuit from inventing the four spurious islands shown for the first time on this map, here noted as Philippeaux, Pontchartrain, Maurepas, and St. Anne. The islands were intended to honor Charlevoix' s personal patron, the Count of Maurepas, Jean-Frederic Phelypeaux (1701 - 1781). The largest of the three islands, Philippeaux, is named directly after the count. The second largest island, Pontchartrain, refers to Phelypeaux's family estate. The third island, which may in fact be a mismapping of the factual State Islands, is named after the count's seat, Maurepas. The fourth and smallest of the islands, St. Anne, references the count's patron saint. Charlevoix described the islands as being rich in minerals, leading numerous explorers to search for them in vain. Bellin dutifully introduced the four islands to his map, offered here, and such was his influence that they were subsequently copied by most subsequent cartographers, including John Mitchell in his seminal 1755 wall map of North America. The highly-regarded Mitchell map was used in negotiating the 1783 Treaty of Paris that formally concluded the American Revolutionary War (1775 - 1783). Therein, the apocryphal Philippeaux was assigned as a marker for the new United States - British America border thus setting the stage, as one might imagine, for later political strife.

This map, as well as Charlevoix's Histoire et Description Generale, are well represented in institutional collections.