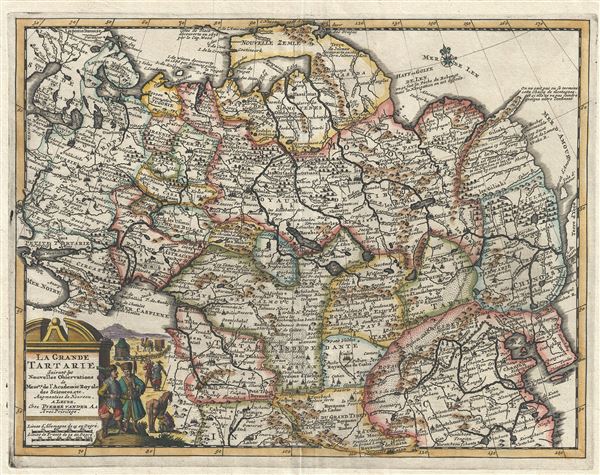 A very attractive 1729 map of Asia and Tartary by the Dutch cartographer Pieter van der Aa. Pieter's (or Pierre) map covers from the Black Sea to Korea and from Nova Zembla south as far as Lhasa and Lahor. Although Van der Aa's maps are not known for their originality, they are highly admired for their fine engraving and overall presentation. Here Vander all embraces many of the apocryphal conventions associated with the mapping of Asia in the late 16th and early 17th centuries. These include the attachment of Nova Zembla to the mainland and a particularly dense mapping of Siberia which, for the most part, is speculative. One area of special note is Van der Aa's treatment of the extreme northeast of Asia between the Gulf of Len and Terre d'Yeco (Hokkaido). Of particular interest is the unusual peninsula extending from the Siberian mainland to the northwest with the following note:

It is not known where this mountain chain ends or if it connects to the other continent. (our own translation)

This oddity appears on numerous maps dating from the late 17th and early 19th century. It is a legacy of Peter the Great's obsession over the search for a Northeast Passage. Around 1648 the Cossack Semen Ivanovich Dezhnyov (1605 - 1673) put together a rough and ready expedition to explore the region. His company consisted of Fedot Alekseyev, traveling with the merchants Andreev and Afstaf'iev (representing the Guselnikov merchant house), who provided their own ship. Gerasim Ankudinov, an experienced sea captain with his own ship and some 30 men. Dezhnev, along with Mikhail Stadukhin recruit some 19 men of his own and procured a traditional kocha ship. Including escort vessels, a total seven ships sailed from the mouth the Kolyma River, along the Siberian Arctic, to the Anadyr River north of Kamchatka, and in doing so became the first Europeans to sail through the Bering Strait some 80 years before Vitus Bering. Dezhnyov described rounding a large mountainous promontory Chukchi, Tschuktschi, or Chukotka Peninsula. Of the seven vessels the multiple leaders, only three ships, and Dezhnev survived the passage. His expedition was mostly forgotten outside of limited cartographic circles until Gerhardt Friedrich Muller discovered Dezhnyov's reports and in 1758 published them. Dezhnyov ultimately proved that there was indeed a nautical route from Russia to Asia, but at the same time confirmed that it was exceedingly impractical for trade. Nonetheless his promontory was subsequently embraced by European cartographers who, lacking serious scientific data from the Dezhnyov expedition, surmised the form. The first of these was Dutchman Nicholaas Witsen, who prepared a map in 1687 based upon Dezhnyov's records that he discovered on a 1665 trip to Moscow. Many cartographers follows suit, though some, like Van der Aa here, even went so far as to suggest that this landmass actually connected to America, and in doing so, both embraced and dismissed Dezhnyov, whose journey provided the first definitive proof that Asia was not connected to America.

Published in 1729 for issue in Van der Aa's much admired Nouveau Atlas.

Koeman, Cornelis, Atlantes Neerlandici. Bibliography of Terrestrial, Maritime and Celestial Atlases and Pilot Books, Published in the Netherlands up to 1880, Aa6. OCLC 276567611.
Looking for a high-resolution scan of this?