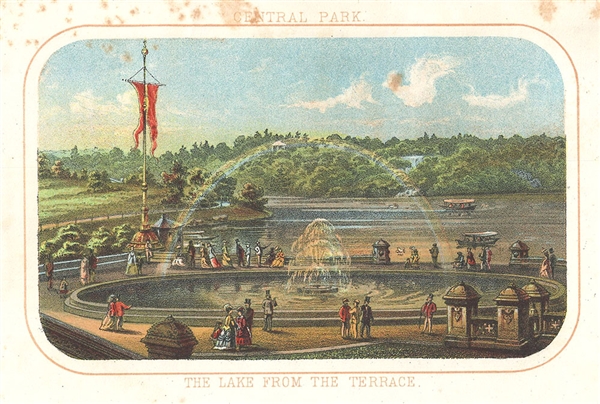 This is a charming 1868 view of the Lake in Central Park, by Shannon and Rogers. This view of the Lake is seen from the Bethesda Terrace, located roughly at 72nd street in the heart of New York City’s Central Park. This view beautifully depicts the Bethesda Fountain in the foreground with visitors strolling nearby. A colorful rainbow can be seen over the fountain. In the background, we see the Lake with a couple of boats in the water. It is important to realize that this part of the park was merely planned, not completed, when this view was made. The central sculpture, ‘Angel of the Water’ by Emma Stebbins, in not included in this view and would only be completed in 1873. Vaux and Olmsted envisioned the terrace as a meeting place in the heart of the park. Today it is one of the most picturesque parts of the park and a popular hangout for artists and musicians.

Prepared for inclusion in the 1868 edition of Joseph Shannon's Manual of The Corporation of the City of New York.

New York Public Library, Art and Picture Collection, b17537253.
Looking for a high-resolution scan of this?