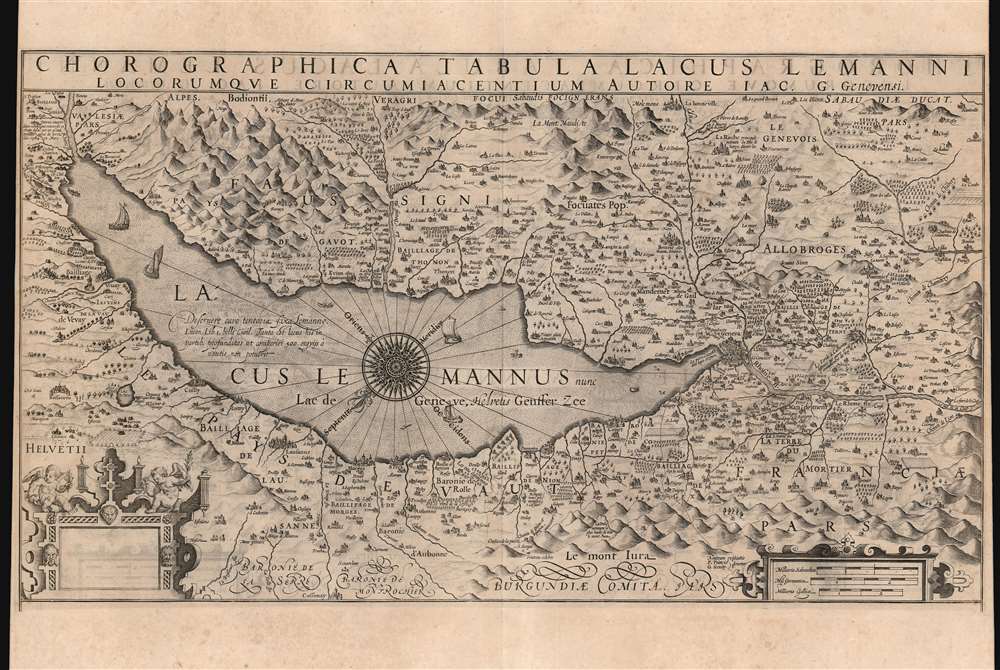 An uncommon and beautiful map of Lake Geneva engraved by Jodocus Hondius for inclusion in his 1606 edition of the Mercator Atlas. This southeast-oriented map depicts the Canton of Geneva in detail and centers on Lake Geneva. The Rhone River can be seen flowing into the lake in the southeast and out again, through the city of Geneva in the west. It is a superb engraving, with elegant strapwork cartouches and dramatic, pictorially-represented mountains. The stippled Lake Geneva is graced with an elaborate compass rose, an array of ships, and even a handful of rowboats. Several geese menace the western coastline, while peeking from the water northwest of the compass rose is a remarkably understated sea monster.

The lands surrounding the lake are filled with details that suggest a close familiarity with the region. Vineyards, farms, ruins, even famous springs are noted. Near the mouth of the Rhone in the southeast is a note describing the destruction of the village of Yvorne 'covert d'une montaigne renversee et choute dessus par un grand tremblement de terre l'an 1584 in Mars', a reference to the calamitous March 14, 1584, Aigle earthquake, which also resulted in a Tsunami and seiche in the lake.

There are an array of features which receive specific attention, having been key to the 1600 - 1601 war between the Kingdom of France and the Duchy of Savoy. One, south of the lake and labeled 'La Roche,' is noted as the main retreat of the Duke of Savoy during the war. This is Le Château de l'Echelle, which survives today. To the southwest is the great Fort of Sainte Catherine, erected by Savoy to threaten Geneva, razed by the French and Genevese in December 1600. In the southern corner is the Chemin de Chambery, running from Sainte Catherine towards Chambery, the capital of Savoy. The war was won by the superior numbers of the French, and peace offers were swiftly accepted in 1601. The conflict was resolved in the January 17, 1601, Treaty of Lyon whereby Savoy lost most of its territory west of the Rhône. This included, for example, the Fort de la Cluse over the Rhône at the southwestern edge of the map.

One of the reasons France swiftly accepted Savoyard peace overtures was the possibility that Spain might intervene in the conflict. Savoy, after all, contained a crucial link of the Spanish Road, the route which Spain relied upon for the transport of its armies from the Mediterranean to their war in the Netherlands. Following the Treaty, the Spanish link between Savoy and the Franche-Comte was confined to a single bridge over the Rhône at Grésin (west of this map). This was an unacceptable vulnerability - indeed, France would close the bridge for a time in 1602.

More to the Plate Than Meets The Eye

A sharp eye will note that the map's border, and indeed its plate mark, are truncated at the bottom with an abundance of margin remaining. Hondius' plate had, at that point, been masked off, thus allowing only the map itself to be printed. Examples of this map appearing in the first three editions of the Hondius atlas showed the entire plate: the map was embellished with the portraits of John Calvin, William Farel, Pierre Viret, Theodore Beza, and Simon Goulart, each accompanied by laudatory descriptions. All were Protestant theologians and founders of the Calvinist Church, whose activities centered on Geneva. Hondius was, himself, a Protestant. Although his heir, Henry Hondius, was a staunch anti-Catholic, he appears to have made the decision to remove Calvin and his coreligionists from the present map. Perhaps this was to appease the Atlas' developing, broader European audience. In fact, we are aware of examples of early editions of this work where the portraits have been deliberately defaced. In any case, examples of the map from 1612 onwards mask the portraits, and later maps of the region to appear in the Hondius atlas do not include them.

Hondius' map was among those prepared for addition to the 1606 Mercator Atlas, the plates for which he acquired from that cartographer's heirs. The map was drawn by Jacques Goulart (1580 - 1622), whose deep familiarity with the region is evident in this, his sole known surviving geographic work. Virtually nothing is known of the man, but it is very tempting to think that he might have been related to the French Calvinist theologian Simon Goulart pictured on early editions of this map. Unfortunately, Simon's biography is as scant as Jacques', and any connection is lost to history.

Another puzzling cipher with this map is the empty cartouche in the lower left. We have few hints. Another elegant cartouche containing the map's scales balances the work in the lower right. The title of the map and its attribution to Goulart commands the upper border. It is possible that Hondius intended his imprint to fill the blank cartouche, but his other works seldom use cartouches in this way; occasionally his maps would include a descriptive text here.

This map was engraved by Jodocus Hondius for inclusion in his 1606 atlas; given its content it cannot have been produced prior to 1601. It remained in Hondius atlases until 1633, by which time it was replaced by a new work: north-oriented and without the lower border's figures. The present example corresponds typographically to those appearing in the 1623 Latin edition of Henry Hondius' Atlas, editio quinta. The separate map is well represented in institutional collections.


Jacques Goulart (1580 - 1622) was a Swiss cartographer, whose map of Lake Geneva would provide the basis for the maps of that lake and its surrounds produced by Hondius, Blaeu and Jansson. It is tempting to surmise that he might be related to the French Reformed theologian Simon Goulart (1543 - 1628) but the genealogies of neither man are complete. We know nothing of his background, and his superb map of Lake Geneva appears to be his sole cartographic contribution. Some biographers also credit Jacques as a theologian, but we can find no published work by the man to support this. Learn More...