1857 Colton Map or Chart of the World's Lakes and Islands 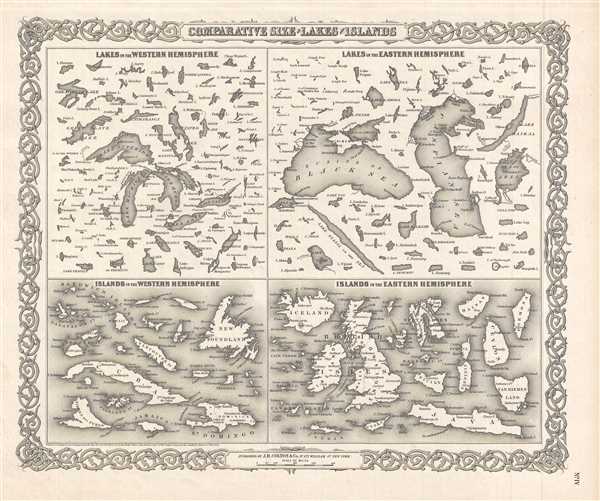 1857 Colton Map or Chart of the World's Lakes and Islands

Compares the relative size of the world's lakes and islands.

This is an 1857 J. H. Colton curious topical chart of the world's great islands and lakes. The chart is divided into lakes and islands of the Eastern and Western Hemispheres. Curiously, the chart does not include Greenland - whose northern limits had not yet been explored when this map was printed. Colton does however include 'Laky Nyassi on the Sea' - a large lake in Africa that was, at the time, still largely speculative with regard to its size and orientation. Most people today associate Colton's Lake Nyassi with Lake Malawi. The whole is surrounded by Colton's typical spiral motif border.

Drawn by J.H. Colton and published from Colton's 172 William Street Office in New York City. Issued as page no. IV in volume 2 of Colton's 1857 Atlas of the World.