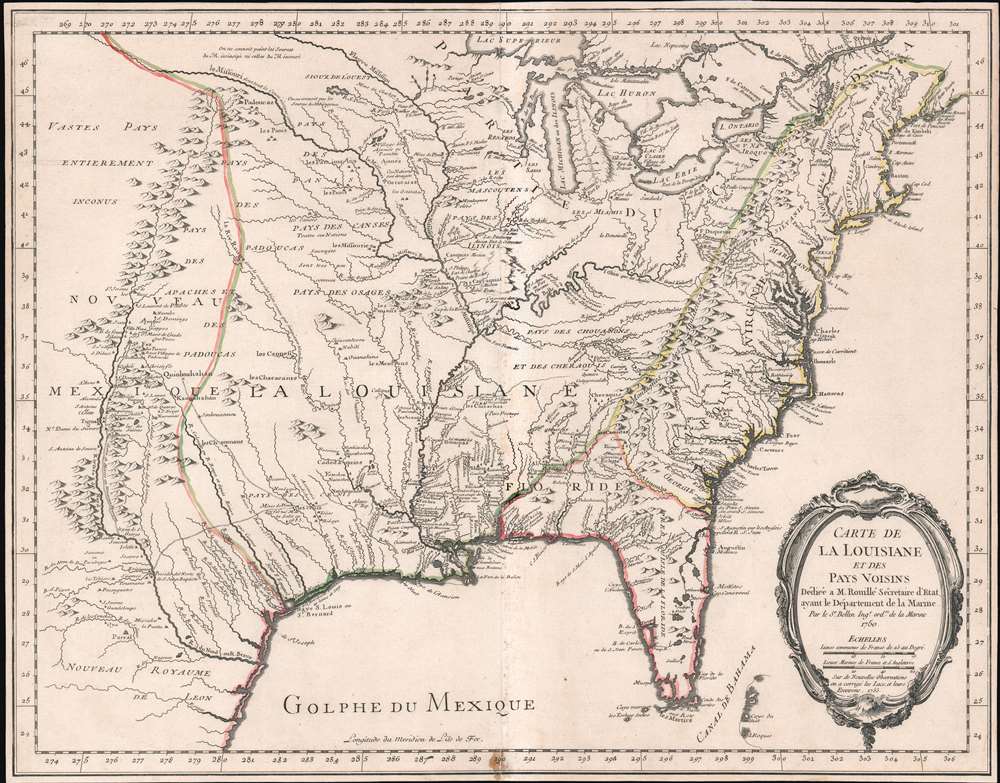 French perspective map of the French and Indian War.

The map presents the much of the modern United States as the French understood it at the outbreak of the war. Spanish territory is red, English territory is yellow, and French territory is green. The British are here restricted to the coastal lands east of the Appalachian Mountains, and bounded on the south by the Altamaha River, which forms the boundary with Spanish Florida. French Territorial claims are expansive, encompassing roughly 2/3rds of the land and controlling the most valuable waterways, including the Great Lakes, the Ohio, and the Mississippi. Forts, mission settlements, mines, and trading posts dot the Mississippi Valley, but in truth, most of these were, by this time, only loosely manned or altogether abandoned - hardly an argument for effective occupation.

The French and Indian War (1754 - 1763) was the North American extension for the worldwide Seven Years' War (1756 - 1763). It is generally considered distinct from the global conflict due in part to its isolation, and in part to the participation of Native American peoples. The war fought between the British Colonies in North American and New France; each side being supported by Native American allies. Conflict erupted over conflicting claims to the Ohio River, Allegheny, and Monongahela River valleys, and the Great Lakes. The French believed that their territory extended eastward to the Appalachian Mountains, including all five of the Great Lakes, while the British crown had long made a practice of offering coast-to-coat grants. The French and British were in very different positions at the outbreak of the war. The British controlled the coast and North America largest cities, with a total population over 2,000,000. The French on the other hand, controlled Quebec, the Great Lakes, and the Mississippi Valley. Nonetheless, their hegemony in the region was tenuous at best. With less than 60,000 settlers in New France, the French instead relied on close ties with Native American nations. Formal warfare commenced on July 4, 1755, when George Washington's troops were defeated at Fort Necessity (F. de Necessité détruit), and five days later General Braddock's troops were repelled at the battle of the Wilderness below Fort Le Quesne (Fort Duquesne). Although they initially won several important victories, the French were ultimately overwhelmed by better supplied more numerous British troops and, being occupied in their European war against Prussia, were unwilling to commit further reinforcements. Ultimately, the French surrendered to the British. In the subsequent 1863 Treaty of Paris, France surrendered all of its North American possessions to the Great Britain - forever transforming this history of North America.

This map features a wealth of cartographic information drawn in part from the Guilaume de L'Isle map of 1718, but has been expanded considerably with new information from the the Chaussegros de Lery manuscripts and Pierre-Francois-Xavier de Charlevoix s Histoire et description generale de la Nouvelle France. Of note is the curious mountain range running through Michigan.

Up to Date Information

The inclusion of Fort Necessity is significant, as it suggests this map was issued just months after the construction of the fort and George Washington's disastrous defeat there. It underscores how quickly information moved - even through the outback of the New World and active war. For this map to have been made, news of the events, as well as cartographic reconnaissance, would have had to move rapidly from Fort Duquesne, down the Ohio River, then down the full length of the Mississippi, then across the Atlantic to Paris. There Bellin would have had to study the work, reconcile it with his older maps, update and re-engrave them accordingly, and then get the map to the presses for distribution. The whole is a remarkable accomplishment, but may explain somewhat this maps scarcity, as in a short time, much of the data he would be irreverent.

The map is dedicated to Antoine-Louis Rouillé, comte de Jouy (1689 - 1761). Rouillé replaced Jean-Frédéric Phélypeaux, 1st Count of Maurepas (1701 - 1781), Bellin's former patron, as Secretary of State for the Navy (Ministère de la Marine) on July 24, 1754, just in time for the French and Indian War. Bellin, who worked under the Navy Department, would have been highly motivated to engender Rouillé patronage and good well, making the dedication unsurprising.