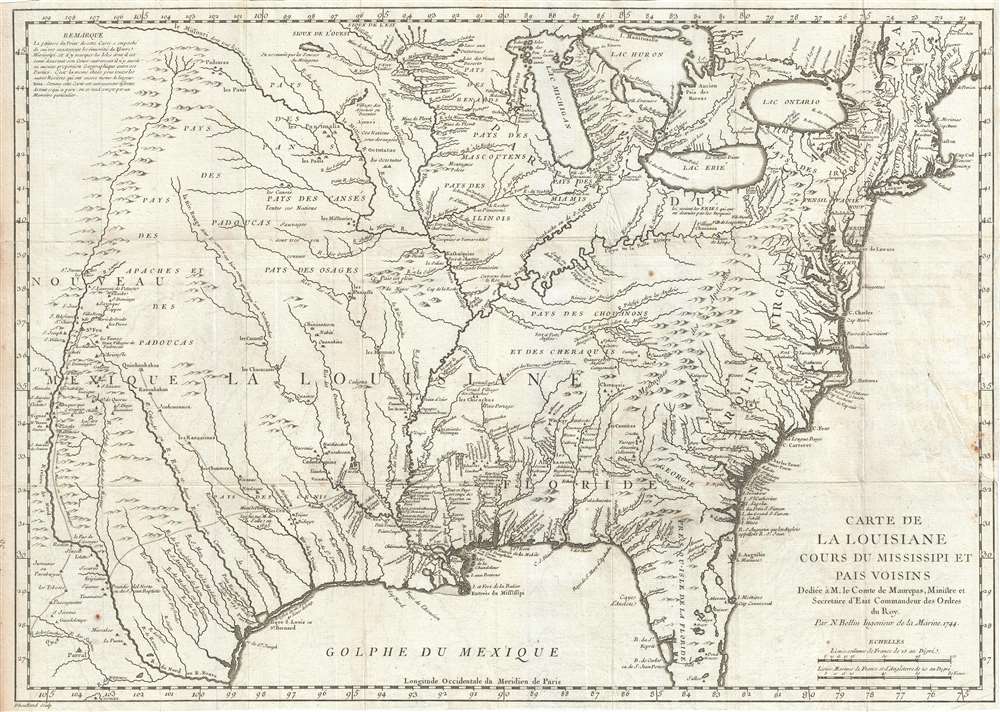 An important and often overlooked 1744 map of French, English and Spanish claims in North America.
$1,500.00

An important and influential 1744 map of the settled portions of North America by the French cartographer Jacques-Nicholas Bellin. Centered on the Mississippi Valley, Bellin's map covers from the Riviere de Nord (Rio Grande) eastward to the Atlantic seaboard and from Lake Huron to the Gulf of Mexico and south Florida.

Though one of Bellin's earliest works on North America, this map is often overlooked and underestimated by collectors and scholars alike, possibly due to its similarity to Guillaume De L'Isle's map of 1718, on which this is clearly based. Even so, Bellin offers a wealth of new material throughout marking this map as a unique and meticulously researched production. Changes include updates to the sites of various fortifications and villages, a sophisticated remapping of southern Florida, corrections in the Great Lakes, multiple corrections to the course of the Ohio and Wabash Rivers, and the inclusion of a speculative mountain range in Michigan. Bellin follows De L'Isle in extending the Riviere du Nord (Rio Grande) nearly to the Missouri, which flows tantalizingly from the map's northwestern corner - suggesting thereby the possibility that it may lead either to the Pacific or a speculative Sea of the West. The route of explorer / conquistador Hernando de Soto through what would become Texas is also clearly noted.

Like the De L'Isle map before it, Bellin's map is a profoundly French production indicative of both the sophistication of 18th century French cartography and influence of French political ideologies. The map's largest text block reads 'La Louisiane' and fills the center of the map, clearly defining the map's focus. French territory extends as far east as the Appalachian Mountains, relegating the British colonies to seemingly meager Atlantic coastal holdings. On the opposite side of the continent French dominion extends as far as the Riviere du Nord (Rio Grande), including all of Texas and parts of modern-day New Mexico - claims associated with La Salle's explorations and colonization of the Gulf Coast in 1685. (These claims, incidentally, led to 19th century U.S. claims on Texas associated with the Louisiana's Purchase.) Detailed identification of hundreds of American Indian nations and settlements throughout the territory, mostly along known river courses, further illustrate France's paternal and comparatively peaceable approach to New World Indian relations, commerce, and colonization. The contrast is partially noteworthy regarding the English territories to the east of the Appellation Mountains where few American Indian settlements are noted. Just 10 years after Bellin drew this map these and other tensions would eventually devolve into the 1754-1763 French and Indian War.

Bellin prepared this map to illustrate Pierre François Xavier de Charlevoix's Histoire et description generale de la Nouvelle France, however most of its major updates are based upon the manuscripts compiled by Gaspard-Joseph Chaussegros de Lery, a French Canadian military engineer active throughout French America in the early 18th century. Charlevoix himself was a Jesuit missionary and traveler commissioned by the French crown and the Duke of Orleans to reconnoiter French holdings in the Americas. The French had just lost control of the Hudson Bay and were actively in search of a profitable route to the Pacific, which many believed lay in the network of rivers and lakes to the west of the Great Lakes. Charlevoix thus had the secondary commission to 'inquire about the Western Sea, but [to] still give the impression of being no more than a traveler or missionary.'

Charlevoix's history and this map thus proved exceptionally influential as one of the most comprehensive works on North America predating the French and Indian War. Copies of the Histoire et description generale were to be found in the libraries of many 18th century luminaries, including Voltaire, Franklin, and Jefferson. Jefferson in particular admired Charlevoix's work, calling it 'a particularly useful species of reading' and no doubt influenced his decision to pursue the historic 1802 Louisiana Purchase, possibly the most significant event in the post-colonial history of North America. The separate map is well represented in institutional collections.