1968 Devos Pictorial Map of the Moon and Space Vehicles 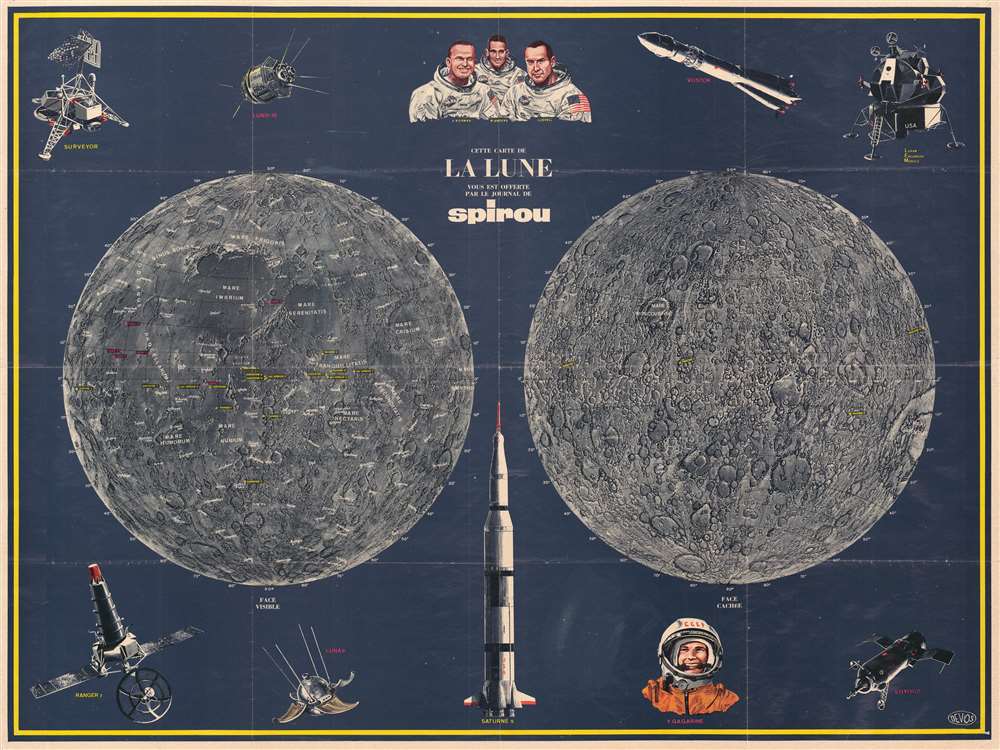 1968 Devos Pictorial Map of the Moon and Space Vehicles

Created at the height of the 'Space Race', the map features protraits of Apollo 8 astronauts Frank Borman, James Lovell, and William Anders, along with a portrait of cosmonaut Yuri Gagarin, the first human in outer space.

Created by Jaques Devos, a Belgian artist, this 1968 pictorial map of the Moon presents the history of space exploration from an objective perspective, celebrating both American and Soviet achievements. Depicting both hemispheres of the Moon, the side facing Earth (labeled here as side visible) is situated on the left side of the sheet, while the side facing away from Earth, known as the far side of the Moon or the dark side of the Moon, is on the right, with the two hemispheres surrounded by illustrations of space vehicles and astronauts Frank Borman, James Lovell and William Anders, and cosmonaut Yuri Gagarin, the first human in space.

The Maps of the Moon

The far side of the Moon, or the face cachée as it is labeled here, is the hemisphere of the Moon that is always facing away from Earth due to a phenomenon called tidal locking, whereby tidal forces on Earth slow the Moon's rotation to the point where the same side is always facing Earth. Only eighteen percent of the far side of the Moon is ever visible from Earth. Humanity had not observed the remaining eighty-two percent until 1959 when the Soviet Luna 3 space probe photographed the far side for the first time. Borman, Lovell, and Anders were the first humans to view the entire far side of the Moon when Apollo 8 orbited the Moon in 1968. This side of the Moon is covered in impact craters and very few lunar maria. Maria, peaks, and other physical features are labeled on the side facing the Earth, as are the sites of the American Orbiter, Surveyor, Ranger landing and crash sites are noted, as are the sites of the Soviet Luna program. Latitude and longitude lines are also overlaid on the Moon's surface.

Illustrations of vehicles used in space exploration frame the two central maps of the Moon. Starting in the upper left corner, the first program references is the Surveyor program, which was a NASA program that lasted from June 1966 to January 1968 that sent seven robotic spacecraft to the Moon. The program's goal was to demonstrate the feasibility of soft landings on the Moon. Next to the Surveyor lander is Lunik, or Luna, 3, a Soviet spacecraft launched in 1959 and was the first-ever man-made object to photograph the far side of the Moon. In the upper right corner is an illustration of a Soviet Vostok rocket, which was the family of rockets uses to launch Sputnik 1, the first artificial satellite, and Yuri Gargarin's first crewed mission to space, and the Lunar Excursion Module, later renamed simply the Lunar Module, which was used by Apollo astronauts to land on the Moon.

The Soyuz capsule in the lower right corner was first designed for the Soviet space program in the 1960s and remains in use today, ferrying crewmembers and supplies to the International Space Station. In the middle between the two lunar hemispheres is an illustration of a Saturn V rocket, which was used by NASA between 1967 and 1973 to launch the Apollo missions and Skylab. Luna 9, a Soviet unmanned space mission, is illustrated on the lower right and was the first spacecraft to achieve a soft landing on the Moon. Ranger 7, in the lower left corner, was the first American space probe to transmit close images of the lunar surface back to Earth. It achieved a lunar-impact trajectory and transmitted images in the final minutes of its flight before crashing into the Moon.

Le Journal de Spirou was founded on April 21, 1938 and is still published today. Spirou's Golden Age was from the late 1940s through the 1960s, when its most popular comics, including Lucky Luke, entered publication. The magazine had many ups and downs over the course of its long existence, but has recently found its footing once again.

This map was drawn by Jacques Devos and published by Le Journal de Spirou in 1968. No entries are recorded in the OCLC and it is scarce on the private market.

Jacques Devos (November 24, 1924 - January 27, 1992) was a Belgian author, scriptwriter, and artist of Belgian comics, remembered for the series Génial Olivier. Born in Brussels, Devos began working in comics for the journal Spirou in 1961. He spent the twenty years before taking the job at Spirou working in his father's bicycle shop. He worked on the series Tim et Tom, Whamoka et WHikilowat, Djinn, Alertogas,Victor Sébastopol,Superherman, and Génial Olivier