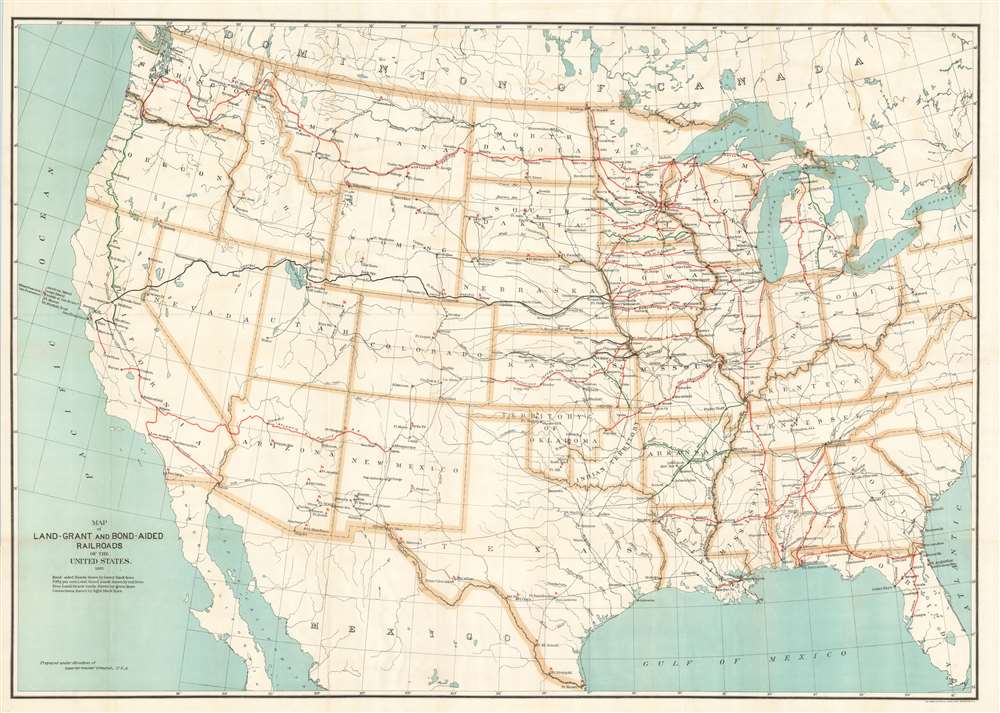 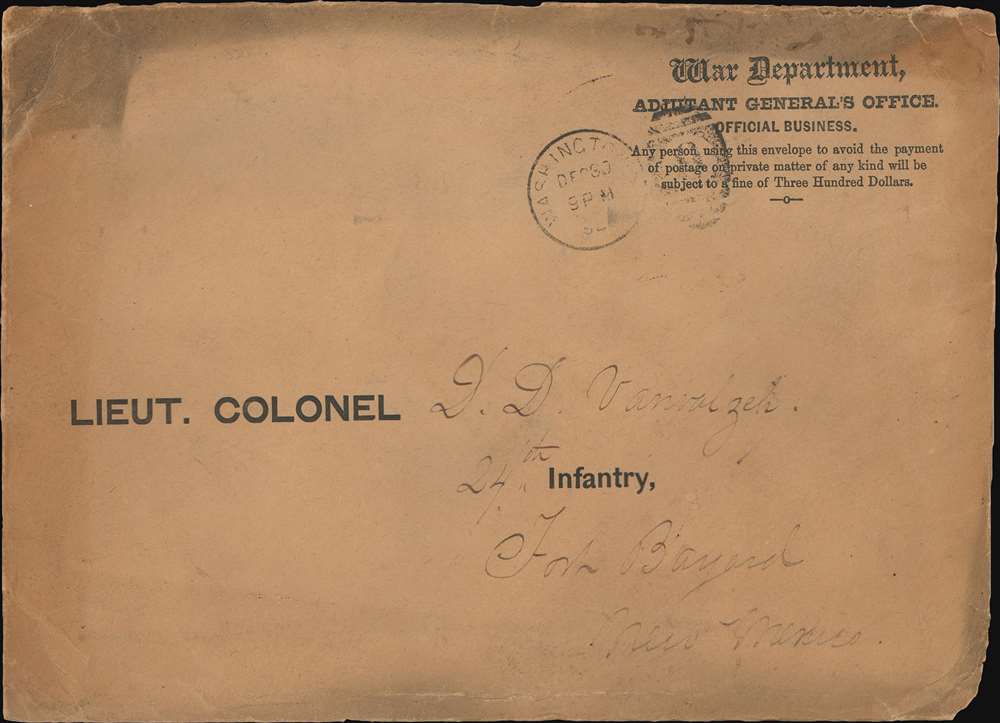 This is an 1892 U.S. Army Quartermaster General railroad map of the United States owned by Army Colonel David Dougall Van Valzah while he was in command of a Buffalo Soldier infantry regiment in New Mexico. The map depicts most of the continental United States from the Pacific Ocean to Maryland, Virginia, Pennsylvania, and New York and from Canada to Mexico. Issued with General Orders, No. 77 in 1892, black, green, and red lines trace land-grant and bond-aided railroads in the western United States. General Orders No. 77 outlined military procedures for 'compensating' the railroads for 'transporting United States troops and property.' The order, which the map accompanied, specified exact rates each of the concerned railroads was owed. The Adjutant General explained the map's inclusion in this way

As an aid to a clear and convenient understanding of the routes, termini, etc., of the several railroads to which this order refers, and as a matter of ready reference, when the use of these roads is involved in the issue of transportation, a map of the land-grant and bond-aided roads is published herewith.

Colonel David Dougall Van Valzeh (January 5, 1840 - April 22, 1919) was a career officer in the U.S. Army. Born in Illinois, Van Valzeh enlisted in the Union Army at the age of twenty-one on May 14, 1861, and was commissioned as a 1st Lieutenant. Van Valzeh was captured by the Confederates on May 5, 1864, the first day of the Battle of the Wilderness, and was imprisoned at Macon, Georgia, and Columbia, South Carolina. He was paroled on December 12, 1864. After the end of the Civil War, Van Valzeh stayed in the U.S. Army and was promoted to captain, major, and eventually lieutenant colonel. At one point, he was offered the position of commander of the Army officers' school at Fort Leavenworth, Kansas, since he was considered one of the army's best tacticians. For unknown reason, he declined the posting. He was stationed in the American West during the 1880s and 1890s, where he served at Fort Assiniboine, Montana, with the 20th Infantry Regiment, which he eventually commanded. He was then transferred to Fort Bayard, New Mexico, where he commanded the 24th Infantry Regiment, one of the famed Buffalo Soldier units. By 1897, Van Valzah was in command of the 18th Infantry stationed at Fort Bliss, Texas. During the Spanish-American War, Colonel Van Velzah commanded the 18th Infantry Regiment at Iloilo in the Philippines. While fighting in the Manila campaign, Van Valzah's health deteriorated, and he applied for retirement. Van Velzah was discharged on June 20, 1899. He died in Lewistown, Pennsylvania, on April 22, 1919, of 'senility' and 'senile dementia' at seventy-nine.

The 24th Infantry Regiment and the Buffalo Soldiers

'Buffalo Soldier' was a nickname originally given to Black Cavalry of the 10th Cavalry Regiment by the Native Americans that fought them during the Indian Wars. Eventually, the term became synonymous with all the Black regiments formed in 1866. The 24th Infantry Regiment was formed on November 1, 1869, and all enlisted soldiers were black and were either veterans of the U.S. Colored Troops or freedmen. The 24th Infantry served in the western United States until 1898 when the regiment was deployed to Cuba.

This map was prepared under the direction of the Quartermaster General of the United States Army and printed by Norris Peters in 1892. The OCLC catalogs a dozen examples in institutional collections across the United States.