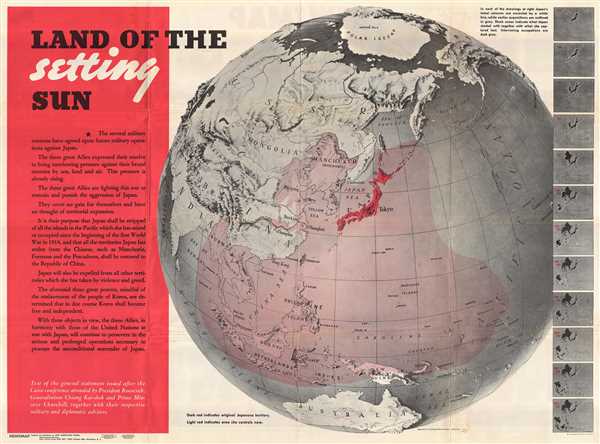 An iconic American World War II propaganda broadside map by the cartographic innovator Richard Edes Harrison illustrating, as projected on the hemisphere, the expansion of the Japanese Empire. The broadside, Land of the Setting Sun, formally entitled Newsmap. Monday, December 27, 1943, Vol. II No. 36, illustrates the rapid militaristic expansion of the Japanese Empire from 1914 to December of 1943. A series of maps to the right of the primary image follow Japan's Pacific conquests from 1875 to present. A statement, to the right of the map, outlines the intention of the Allied Powers in Asia (United States, Great Britain, and China), to curtain Japanese imperialism and return that nation to its original 1814 borders.

The verso of the maps features a segmented breakdown of the most recent war news on various fronts. Most of it is quite good for the Allies. Following a series of Allied victories in Italy, Russia, at Stalingrad, in East Asia, and Indonesia, the War had, by this date, turned firmly against the Axis powers. As such, there was little need for 'sugar coating' and the general message was, in as much as war can be, truthfully positive.

Weekly 'Newsmaps' were published by the Army Orientation Course of the Special Service Division Army Service Forces, a propaganda arm of the United States War Department. The Newsmaps typically employed bold typesetting and dramatic imagery to relay the most recent war news from a distinctly 'positive' perspective. Nonetheless, few Newsmaps were as dramatic or impactful this one by Richard Edes Harrison, whose distinctive style, evident here, many consider to have revolutionized modern journalistic cartography.

Very good. Minor wear along original fold lines, especially at fold intersections, where there is minor verso reinforcement in 2 or 3 places. Else very clean examples.