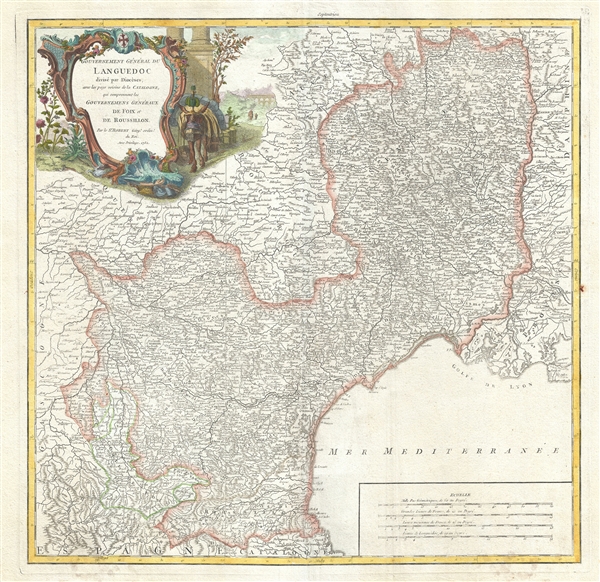 This is a beautiful 1752 map of the Languedoc region of France by Robert de Vaugondy. It covers the southeastern portions of France including the whole or parts of the departments of Pyrenees-Orientales, Herault, Tarn, Tarn-et-Garonne, Aveyron, Lozere, Gard, Bouches-du-Rhone, Ardeche, Haute-Loire, Cantal, Aude, Ariege and Haute-Garonne. The map extends from Urgel in Spain north to Brioude and from Lombez east as far as Martigues and the Mediterranean Sea. The map renders the entire region in extraordinary detail offering both topographical and political information with forests and mountains beautifully rendered in profile.

The Languedoc wine-growing region area is home to a wide variety of vineyards and is the oldest and largest in France. The department of Aude is famous for its wide variety of vineyards and wine production. In the east are the wines of Corbieres and la Clape, in the center are Minervois and Cotes de Malpeyre, and in the south, blanquette de Limoux. A wide variety of wines come out of the Pyrenees-Orientales region, including the famous Muscat wine. This wine can be tasted as an aperitif or with dessert. It pairs especially well with Roquefort cheeses. The red wines produced in the Herault region are meaty, tannic wines with a deep red color. The area is also known for its production of Pelardon cheese, made from goat's milk, and Perail, a ewe's milk cheese. Tarn produces a variety of traditional wines, including Cahors, Mauzac, Loin de l’Oeil and Ondenc for the white varieties and Braucol, Duras and Prunelart for the reds, while Tarn-et-Garonne, produces a number of quality wines, such as AOC Fronton, Cotes de Brulhois, and the Vins de Pays des Coteaux et Terrasses de Montauban. Tarn-et-Garonne is also home to the area of Coteaux du Quercy, which has a reputation for producing supple and full-bodied wines. The city of Moissac is known for its fine desert grapes. This region is also a historic stopping point on the Pilgrimage to Santiago de Compostella.

The map includes a beautifully engraved title cartouche in the top left quadrant. This map was drawn by Robert de Vaugondy in 1752 and published in the 1757 issue of his Atlas Universal.

Rumsey 3353.045. Pedley, Mary Sponberg Belle et Utile: The Work of the Robert de Vaugondy Family of Mapmakers, 155.
Looking for a high-resolution scan of this?