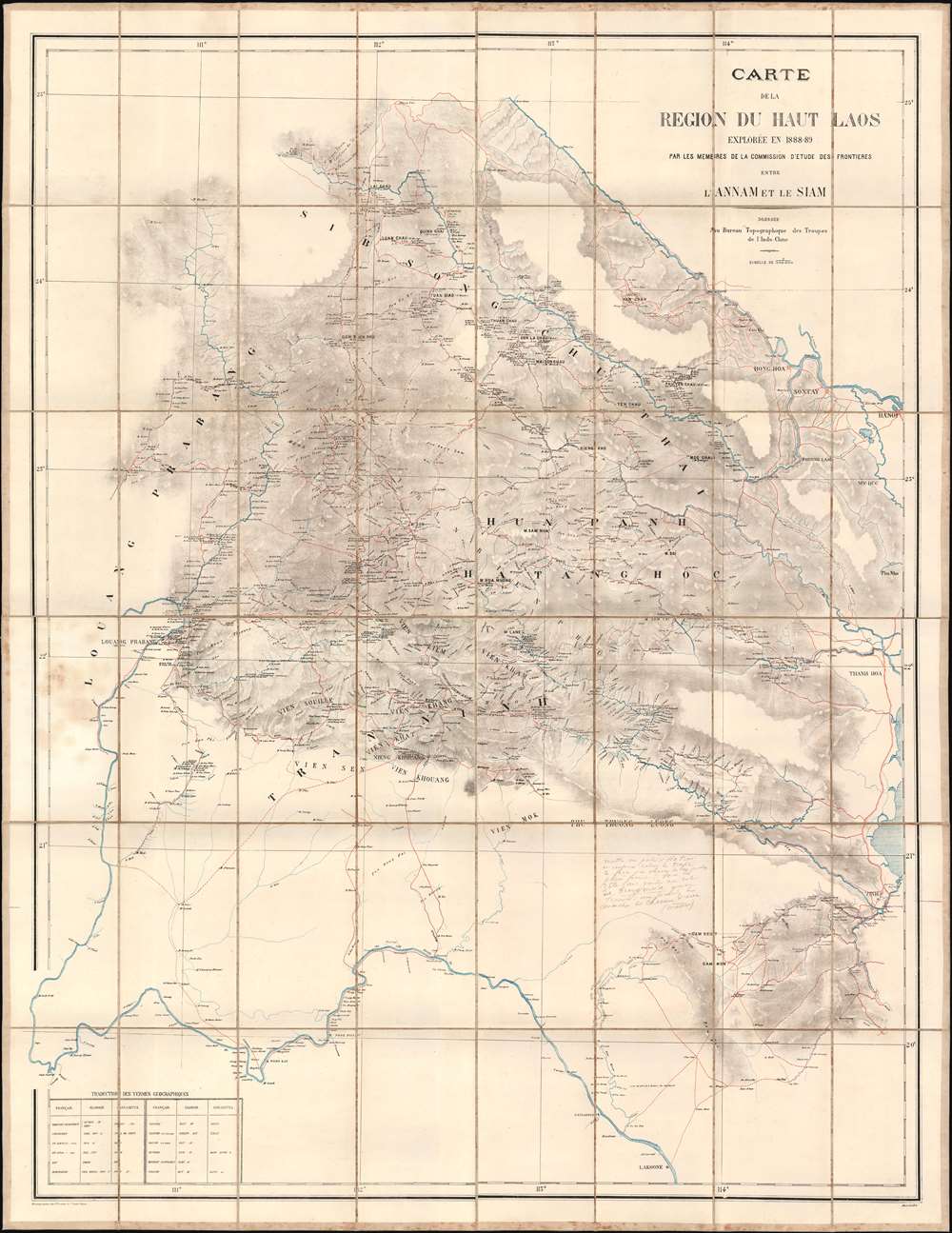 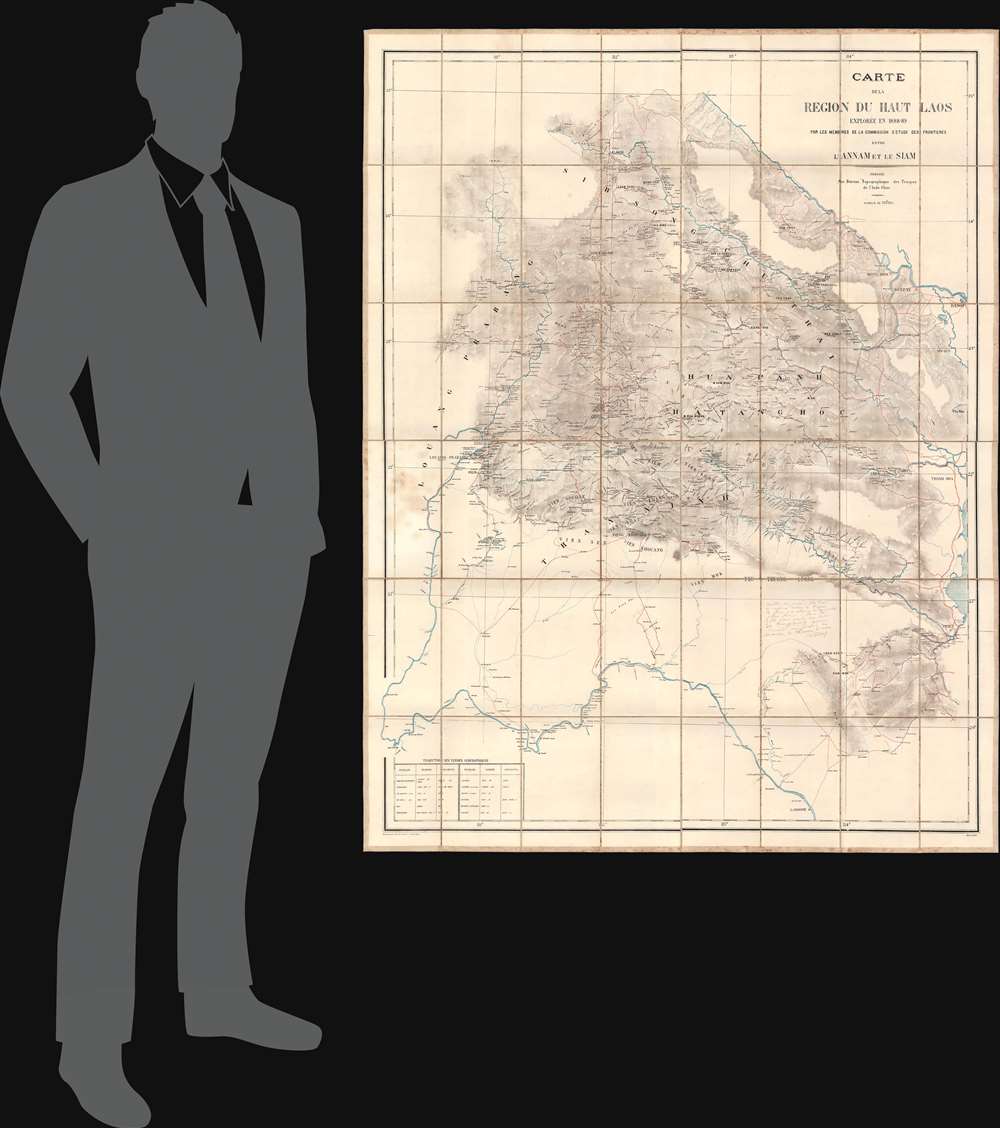 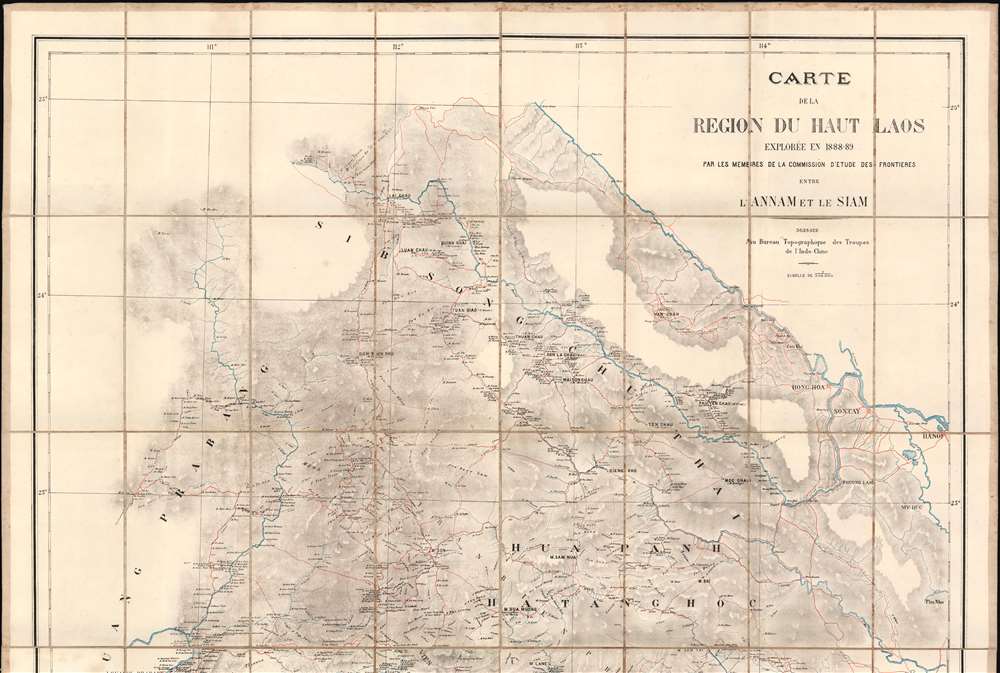 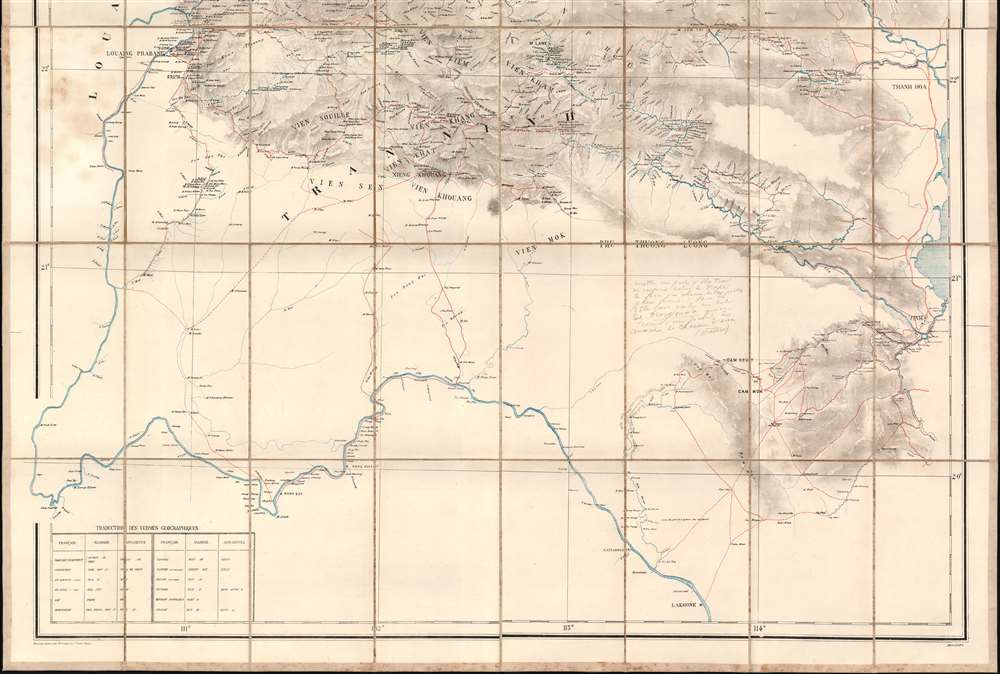 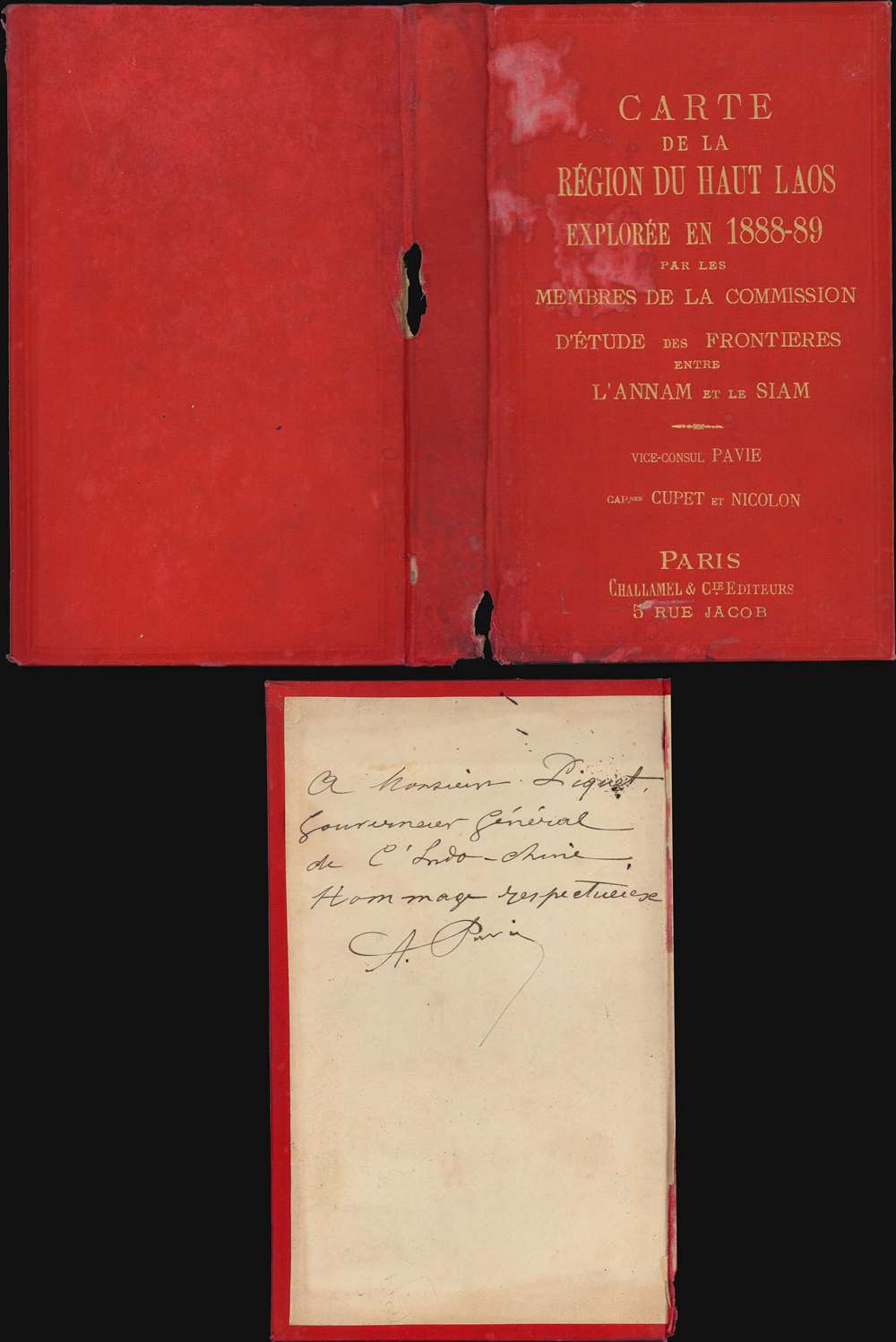 Considered the first scientific survey of Laos, this seminal map was published immediately following the 1889 completion of the second Mission Pavie - the expedition that laid the groundwork for the French Protectorate in Laos. The map is signed by its creator, Auguste Jean-Marie Pavie, and dedicated to 'Monsieur Piquet', referring to Georges Jules Piquet (1839 - 1923), Gouverneur Général of French Indochina from 1888 - 1889, under whose auspices the Second Mission Pavie was undertaken. It further features manuscript content by another mission participant, Victor-Alphonse Massie (1854 - 1892), recommending the placement of a border watch post. The map further notes, in manuscript, Nam Youm (Laos), where the White Tai bandit leader Đèo Văn Trị, was then active. This map is significant on many levels: first as the result of one of the most extraordinary missions of exploration undertaken in Southeast Asia; second, as the first scientific survey of what is today northern Laos; third; as the underpinning of subsequent French Protectorate in Laos; fourth, as the personal copy owned by the Gouverneur Général of French Indochina who ordered the 2nd Mission Pavie.

As the title suggests, the map covers what was then and is today northern Laos, as well as some of the surrounding lands. Detailed coverage embraces the territory between the Upper Mekong, Hanoi and Vinh, and from the Red River forming the border with Chinese Yunnan to Lakhone (Nakhon Phanom, Thailand). The map significantly locates the Laotian royal seat at Louang Prabang on the Nam Ou River. The expedition traveled both overland and via the dense inland river network, mapping countless previously unrecorded villages and settlements - all of which appear here for the first time. The map illustrates in red existing and proposed routes - many followed by the mission itself. The area of greatest focus, where topography is rendered in some detail via shading, covers from the Nam Ou River to Hanoi and north to the sources of the Da River (R. Noire). A secondary area of detail follows the Red River (R. Rouge) along the Yunnanese border. Manuscript content includes annotations regarding Đèo Văn Trị at the upper Da River headwaters, and a larger note by expedition member Victor-Alphonse Massie (1854 - 1892) is located in the blank area just west of Vinh, and although difficult to read, seems to suggest establishing a hilltop watch post.

When this map was produced, northern Laos was a little-known hard-to-access region tucked between powerful nations: the French to the east in Indochina, the British to the west in Burma, the nascent Siamese (Thai) Empire to the south, and Chinese Empire to the north. It was governed from the royal seat in Luang Prabang by King Oun Kham (1811 - 1895). The entire area was deeply unstable. To the east, French forces had taken Hanoi, but resistance was intense, particularly along the Laos and Chinese borders, where the White Tai (Tai Dón) led by Đèo Văn Trị and the anti-French Chinese Black Flag bandit army were active. To the west, the British were largely stymied by agreements with the Chinese, rugged terrain, and the offensive capacity of the Siamese. In 1830, the King Oun Kham determined that the ethnically-related Siamese were the least of all evils and agreed to pay tribute in exchange for protection. The Siamese subsequently considered the Laotian a subject people, and treated them with a heavy hand, engendering resentment. When Pavie saved Oun Kham during the 1887 sack of Luang Prabang by a White Tai / Black Flag raid, smuggling him by raft out of the palace, the king determined to abandon his tribute to Siam in exchange for French protection. This opened upper Laos to French exploration, precipitating the second 'Mission Pavie' in the Haut Laos - and thus this map. The map laid the groundwork all subsequent cartography, exploration, and military action in northern Laos. It spurred Siamese frustration with what it saw as French incursions on Siamese territory, precipitating the Franco-Siamese War (1893), as well as opened the way for a formal French protectorate over Laos, established in 1893 and lasting until 1953.

The 'Missions Pavie' (1879 - 1895) were a series of groundbreaking expeditions spanning some 16 years into the little-known interior of Southeast Asia. The missions were instigated, led, and organized by the dynamic French explorer/diplomat Auguste Jean-Marie Pavie (1847 - 1925), known euphemistically as 'L'Explorateur aux Pieds Nus' ('The Barefoot Explorer') for his adoption of traditional Southeast Asian dress and customs. Collectively, the 'Missions Pavie' explored the largely unmapped inland territory between Siam (Thailand) and French Indochina (Vietnam), including much of modern-day Cambodia, Laos, and Vietnam. They were an extraordinary achievement, not only for their scope, scholarship, and accuracy, but also for the positive relationships they built with the peoples encountered - generally setting the stage for a peaceful transition to French regional hegemony.

This area today compromises the infamous Golden Triangle, a border region embracing northern Laos, Thailand, Myanmar, and Yunnan (China). The region is mountainous, remote, and ill serviced by transportation networks. When this map was issued, this area was the stomping ground of revolutionary and bandit groups (often one and the same), including the White Tai and the Chinese Black Flag Army. Decades later, when the Chinese Communist Party gained power, the Kuomintang (KMT) retreated into the region, relying on its remoteness for protection. Lacking other means of support, the KMT refugees established a mini fiefdom and began producing opium. From the 1950s to about 2000, the Golden Triangle was the largest opium producer in the world. In more recent times, drug activity in the Golden Triangle as transitioned to methamphetamine.

Zincography, or 'zinco' for short, is a planographic printing process similar to lithography. The process was known as early as 1801, when lithography inventor Alois Senefelder (1771 - 1834) in his original English patent for lithography, mentioned the possibility of using zinc plates over tradition limestone. The first zincographic process was subsequently patented in 1834 by Federico Lacelli. The process operates like traditional stone-lithography wherein ink applied to the plate is repelled by the hygroscopic areas, and attracted to the fuchsine areas. It offers several advantages, most importantly, zinc plates are lighter and cheaper than lithographic stones, economizing the process considerably. As such, the process was embraced by various cartographic agencies that demanded mobility and economy, among them the British Ordinance Survey, the French Bureau Topographique, and many military mapping agencies. It was followed by photo-zincography, photo-lithography, and photogravure.

This map was printed in May 1889, immediately following the second 'Mission Pavie'. It was issued in Paris by Augustin Challamel for the Bureau Topographique des Troupes de l'Indo-chine. Of note, this map predates the Bureau's development of its own printing facilities in Hanoi in 1890, so all maps were printed in Paris. The map is rare. We note two other known examples, one at the Bibliothèque nationale de France and a second at the British Library.

Auguste Jean-Marie Pavie (May 31, 1847 - June 7 1925) was a French civil Servan, explorer and diplomat active in Southeast Asia. As resident minister in Bankok, he was instrumental in French successes of 'gunboat diplomacy' in the Franco-Siamese war, which established French authority in the Mekong river valley and resulted in the French Protectorate over Laos. (He would become Minister of the colony , and eventually the first Governor-General of Laos.) Over the course of the 1880s and 1890s, Pavie undertook four survey missions embracing over 250,000 square miles in the highlands North and East of the Mekong, traveling on foot, by elephant and by raft with a team of as many as 40 assistants. The four Missions covered 1) Cambodia and Southern Siam; 2) Northeastern Laos and the exploration of the Black river as far as Hanoi; 3) the Mekong river from Saigon to Luang Prabang; and 4),from 1894 to 1895, the Laotian borderings with China and Burma. In addition to his governmental and cartographic work, Pavie was active in the 1889 establishment of and institution for the education of future colonial administrators, the École coloniale Learn More...


Pierre Paul Cupet (June 1, 1859 - 1907) was a French cartographer, photographer, and military officer. Cupet was born in Sermaize-les-Bains, Marne, the son of a local gendarme. At 18, with a thirst for adventure, he entered the École Spéciale Militaire de Saint-Cyr, where he exhibited aptitude at surveying and cartography. He left Saint-Cyr as lieutenant and was immediately sent with the Zouaves (light infantry) to Algeria. Afterwards, now a Captain of the 3rd Zouaves, he was sent to French Indochina where he participated in the Tonkin Campaign (1884 - 1885). From July 1887, he was part of the Franco-Siamese Commission organized to settle border between French Indochina and its neighbors. He became a close confident of Auguste Jean-Marie Pavie (May 31, 1847 - June 7, 1925) and participated in several of the 'Missions Pavie', where he was responsible for cartography. He was also a hobbyist photographer, and recorded friends, locals, and sights from his journeys. He returned to France to become battalion commander in the 56th Zouaves and then lieutenant colonel in 158th Zouaves. Was made an office of the Légion d'Honneur in 1905. He died in Montmeyran, in the Drôme, in 1907. Learn More...


Auguste-Marie-Philippe Nicolon (July 6, 1864 - January 10, 1896) was a French Foreign Legionnaire active for much of his career in French Indochina. He was born in Vaucluse, Avignon, France. He joined the French Foreign service on March 27, 1874, initially for a 5-year term. He studied at the École Spéciale Militaire de Saint-Cyr through October 1, 1878. Graduating 10th in his class, he joined the 40th French Infantry. Nicolon is associated with the second 'Mission Pavie' (1888 - 1889) in Laos, of which he was third in command after Auguste Jean-Marie Pavie 1847 - 1925) himself and Pierre Paul Cupet (1859 - 1907). The exploratory mission left him in poor health, and he left Indochina for Paris in 1889, writing to Pavie: 'I must depart if I do not wish to leave here the little of me that remains - my bones and skin. Repeatedly troubled by fever, I am, as M. Massie says, at the end of my tether.' Immediately upon his return, on October 8, 1889, he was made a Chevalier de Legion d'Honneur. He spent 2 years recuperating in Paris, during which he married in 1891. Shortly thereafter he was sent to Senegal, Tunisia, and Algeria with the 2nd regiment of the French Foreign Legion. He witnessed and survived the 1894 massacre of Eugène Bonnier's (1856 - 1894) column by Tuareg warriors near Timbuktu. Afterwards he served briefly in Sudan before returning to France, where he died in January of 1896. Learn More...


Jean Baptiste Marius Augustin Challamel (March 18, 1818 - October 20, 1894) was a French historian, editor, and publisher active in Paris in the mid to late 19th century. Challamel is best known as a historian. Even so, although prolific, his personal work more often falls into pop-history and has little originality or merit. More significantly, Challamel also founded Challamel et Cie., a publishing house at 5 Rue Jacob. From this location, Challamel published extensively for French colonial interests in Africa, Asia, Indochina, and Polynesia. His work includes some of the most significant works documenting late 19th century French scientific discoveries, navigation, cartography, and scholarship. He held the contract for official French colonial office printings, including for the Bureau Topographique and the Service Geographique. Although Challamel died in 1894, his firm continued to operate until the 1920s. His heirs, operating under the same name, moved tore 17 Rue Jacob and renamed their firm Librairie Maritime et Coloniale, Augustin Challamel, Editeur. Learn More...