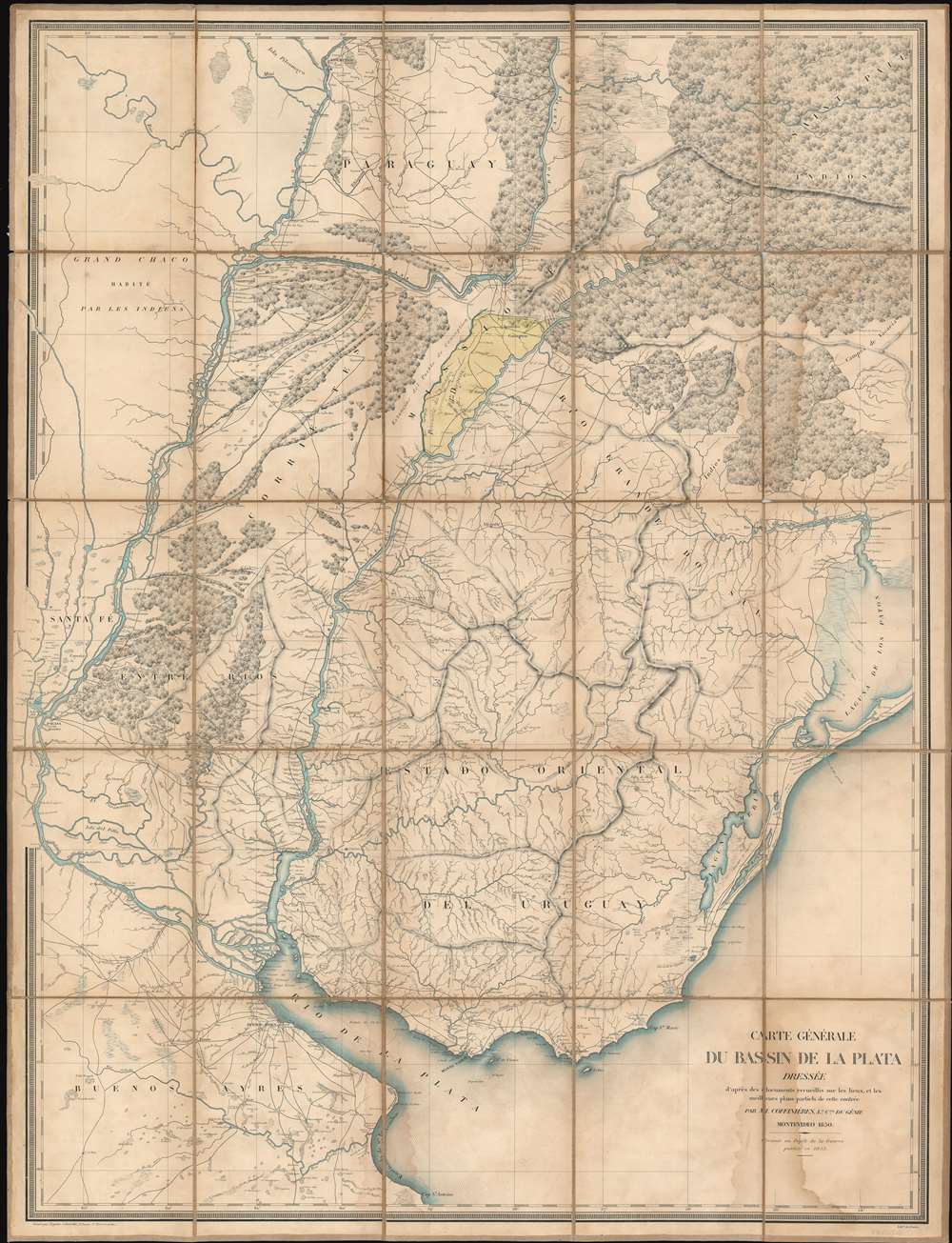 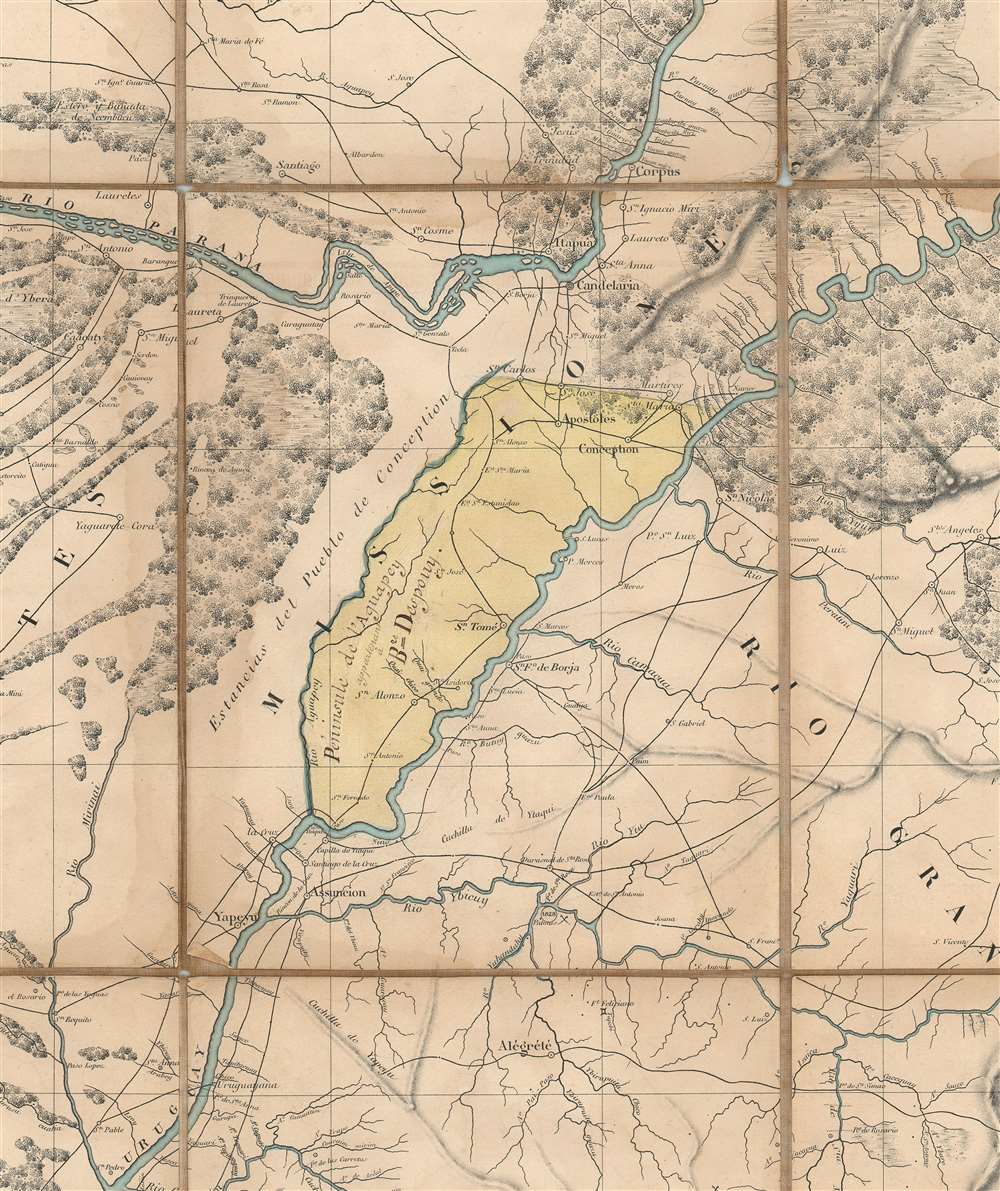 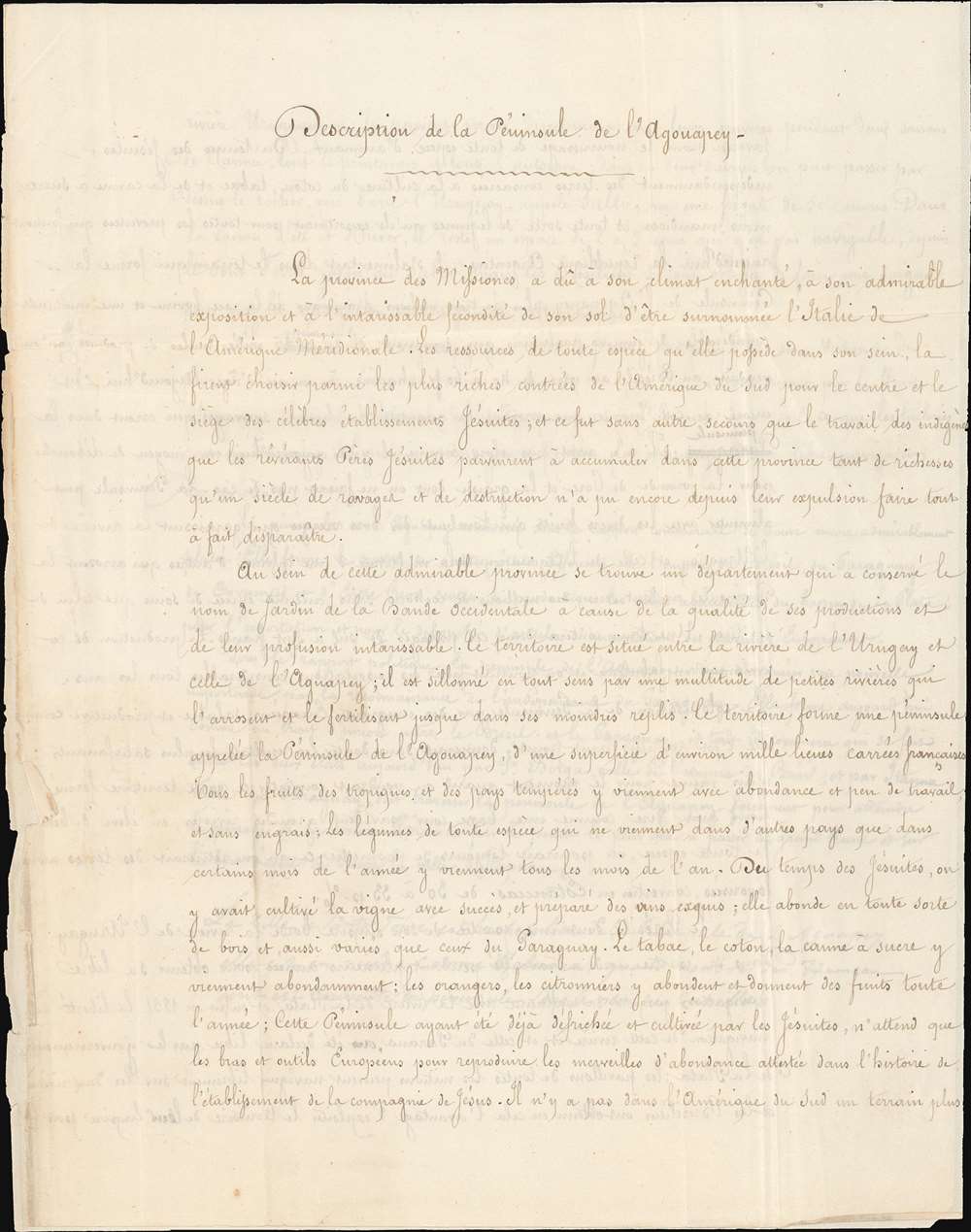 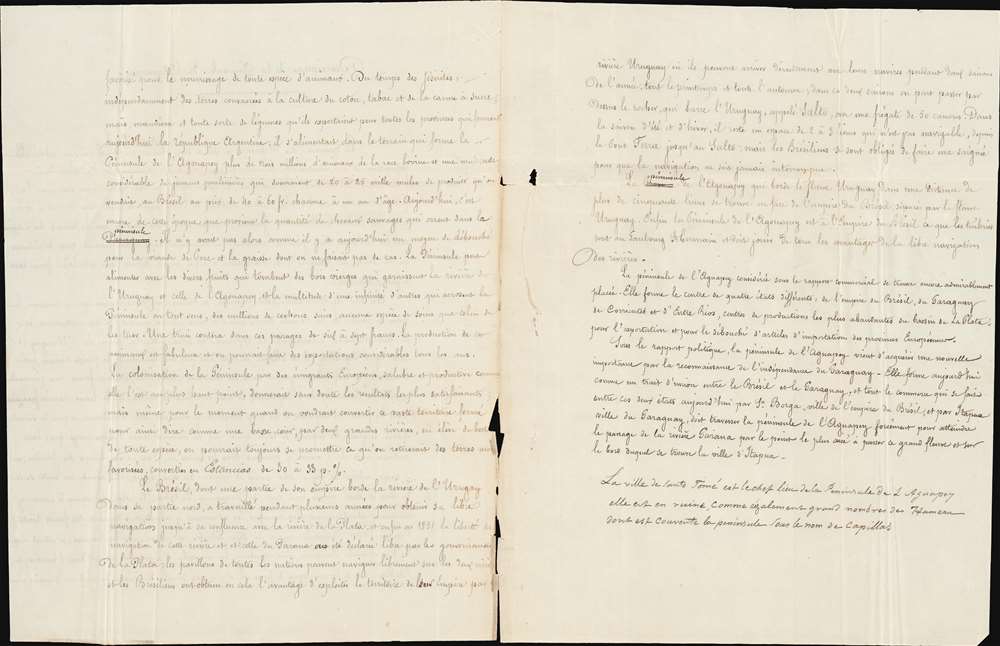 A fascinating 1853 Grégoire-Gaspard-Félix Coffinières map of the La Plata Basin, covering parts of modern-day Argentina, Uruguay and Paraguay. When it was issued, in 1853, this was by far the finest map of the territory lying north of the Rio de la Plata and east of the Paraná River yet produced. It was the product of French colonial ambitions and, appropriately, features manuscript shading and annotation in French highlighting the highly desirable yet only tenuously claimed Misiones region. This is supplemented by a three-page manuscript report in French describing the bounty of the Misiones region and calling for 'European' (no doubt 'French') occupation and development.

Named for the Jesuit missionaries who settled the region in the 17th century, establishing an elaborate network of wealthy Reductions or missions, the Misiones region, here highlighted in yellow wash, encompasses a peninsula created by the confluence of Río Aguapey with the Río Uruguay. Misiones is bounded on the north by Paraguay and Brazil. In 1773, under sanction from the Pope, the Jesuits were expelled, and the Reductions closed. In the subsequent decades Misiones fell into anarchy. Many put forth claims to the desirable region, including Paraguay, Rio Grande do Sul, Entre Ríos, and Corrientes, but, enmeshed in the Spanish American Wars of Independence (1808 - 1833), none could establish and maintain territoriality.

The yellow shaded area, modern-day Misiones, is here described as 'Péninsule de l'Aguapey appartenant à Bze Despouy' (Peninsula of the Aguapey owned by Blas Despuoy). This is important, but requires some backstory to understand.

The Argentine revolutionary Félix Aguirre (1790 - 1834) was sent to Misiones in 1821 by Francisco 'Pancho' Ramírez (1786 - 1821), then leader of the breakaway Republic of Entre Ríos, located just to the south. In the pervasive chaos, Aguirre's appointment was nominal at best, moreover, he spent most of his life in the field, engaged in the Wars of Independence. To supply his troops, he turned to the French merchant Blas Despuoy. Despuoy, who was called 'a soup boiler and manufacturer of mare's grease' built a fortune profiteering on the war, happily supplying all sides in the conflict, but generally favoring desperate revolutionaries over better supplied Spanish forces. On November 3, 1825, Aguirre traded 62,500 hectares of Misiones land to which he had little practical claim to Despouy for 1,460 cotton rods, 114 ponchos, 165 handkerchiefs, 50 hoes, 30 axes, and 70 mares. This barely scratched the surface of his army's needs and within a year, Aguirre found himself deeply in debt to Despouy. A further grant of 890,000 hectares, comprising most of Misiones - as highlighted here - was signed over to Despuoy. Despuoy's claims were honored by the Argentine government, but Paraguay occupied Misiones in 1838, claiming the area was the traditional territory of the indigenous Guarani, Paraguay's major ethnic group. In 1851, he appealed to the French government for intervention. Enter France.

France's once vast colonial empire was decimated during the Napoleonic Wars (1803 - 1815), particularly after the defeat of Napoleon Bonaparte, which resulted in Britain annexing some of France's most valuable possessions. After the July Revolution of 1830, which established Louis Philippe on the throne, France was determined to claim a second colonial empire. The beginnings of the second French colonial empire were laid in 1830 with the French invasion of Algeria, which was conquered over the next 17 years. In the 1840s France continued to grow its colonial claims, adding Tahiti and sending scouting missions throughout the world in search of potential colonies in politically unstable or only tenuously claimed territory. These aggressively expansionist policies continued under the Second Republic (1848 - 1852), when Mexico, California, Argentina, Uruguay, and Paraguay were considered as possible areas of colonial occupation. The Second French colonial empire reached its apex under the Second Empire (1852 - 1870). Napoleon III (1808 - 1873), eager to reclaim the glories of First French Empire, was determined to upstage Britain in colonial affairs and reached out toward India, South America, Vietnam, and Mexico.

In 1850, Charles-Louis Napoléon Bonaparte (1808 - 1873), then president of the Second French Republic, sent the promising Lieutenant Colonel Grégoire-Gaspard-Félix Coffinières to reconnoiter the La Plata region for possible French colonization. This was one of many such expeditions ordered by the French government to poorly mapped, loosely administered, and weakly claimed parts of the world (compare to the 1840s Eugène Duflot de Mofras mission to California). Coffinières was to produce a detailed map of the country, analyze its economic potential, report on the political climate, and compose a report assessing its viability for French colonization. This map is the product of that effort and represents the most sophisticated map of the La Plata then produced. His corresponding report recommended settlement in glowing terms,

It is enough to note the immense migration of people after having drained the old continent turning to the East and the West to arrive in Asia and America. Also, since the beginning of the last century, Spain, England, Portugal, and Brazil argue over possession of the Eastern Band and when, by a marvelous combination of circumstances, the doors are open before us, [and yet] we will refuse to enter!

We are not proposing an unjust and dangerous conquest, far from it! What we want is respect for our flag, to maintain our commitments, open a new outlet for transatlantic commerce, supply our industry, become friends with courageous and kind populations, spread the Christian faith in the new world in the French manner alongside the English, create for our holidays and those of our neighbors a sanctuary for hard-working people of all professions. That's our policy, those are our true interests!

In summary, we believe we have demonstrated our ability based on the evidence that our right, our national dignity, our honor, our history, our current interests and our future grandeur compel us to follow, in South America, a firm and grand policy as befits a powerful nation. (Translation: Spencer D. Hunt)

As the quote suggests, despite Coffinières' efforts and frustrations, France, tied down with its colony in Algeria, was unwilling to immediately act.

This map was published in 1853 and is here accompanied by a three-page handwritten French letter in the same elegant hand that added the manuscript updates to the map in the Misiones region. The letter describes in glowing terms the beauty, bounty, climate, and availably of the Misiones region. While it is unclear who wrote the letter, it was likely intended to stimulate French emigration, settlement, and investment, both official and unofficial. Moreover, the fact that the entire province was technically owned by a Frenchman (Despuoy), created an open door for potential colonists.

When it became clear that the French were preparing to formally colonize, officials in Buenos Aires successfully diplomatically pressured France to relent. France surrendered all claims to Misiones in 1856. Nonetheless, many French immigrants had already settled in the Misiones region and would continue to move into the region, profoundly influencing regional culture and development.

This map was drawn by Grégoire-Gaspard-Félix Coffinières in 1850 and published in Paris by the Dépôt de la Guerre. It was engraved by the firm Regnier et Dourdet (Passage Ste. Marie) and printed by N. Gratia, lithographer. The map is rare, with the OCLC identifying five institutional holdings. The manuscript annotation, and accompanying letter, make it unique in shedding light on an otherwise little known episode of South American colonial history.

Grégoire-Gaspard-Félix Coffinières de Nordeck (September 3, 1811 - January 7, 1887) was a French military officer active in Europe and in Argentina in the middle part of the 19th century. Coffinières was born in Castelnaudary (Aude), France. He studied at the Paris École Polytechnique and later at the l’École d’application du Génie (Engineering College) at Metz. While in school, in participated in the July Revolution, which overthrew King Charles X in favor of Louis Philippe. After serving in Algeria and Morocco he was sent to Argentina - where the French had developing proto-colonial interests. There, in 1850 (published 1853), he compiled the first deatiled map of the La Plata basin, 'according to the documents collected on the spot and the best partial plans of this region' - a major cartographic achievement. Back in Europe he participated in the Crimean War (1853 - 1856) and the siege of Sébastopol. In 1860, he succeeded General Charles Eblé as head of the École Polytechnique. During the Franco-Prussian War of 1870 he was put in charge of the defenses of Metz. He is often accused of having surrendered the position without a defense, but passed the accusation fo treason to Francois Achille Bazaine (1811 - 1888). He moved to La réserve militaire in 1876 and retired fully from military life in 1881. Coffinières died in 1887 and is interred in his birth town of Castelnaudary. Learn More...


Depot de Guerre (1688 - 1887) was a branch of the French military devoted to creating, collecting, and publishing military memoirs, plans, and maps. The Depot was founded in 1688 by Francois Michel le Tellier, the Marquis de Louvois. Louvois held the post of Secretary of State for War under Louis XIV and his best known for composing the first letter regarding the mysterious "Man in the Iron Mask". During the French Revolution and the Napoleonic Wars the Depot de Guerre expanded its operations to include any and all topographical research in France. In 1887 the Depot de Guerre was disbanded and its duties split between the Institut Geographique National (IGN) and the Service Historique de L'Armee (SHA). Learn More...


Régnier et Dourdet (fl. c. 1840 - 1870) was a French engraving, printing, lithography, and publishing firm active in Paris during the middle to late 19th century. The firm is frequently associated with Lith. Gratia (fl. c. 1864 - 1865), another Paris firm. They were located at 8 Passage Ste. Marie (R. du Bac), Paris. They published a wide corpus of work, but are best known for engraving and publishing the impressive pioneering carto-infographic studies of French civil engineer Charles Joseph Mindard (1781 - 1870). The firm also engraved and printed extensively for the Dépôt de la Guerre. Régnier may have been Claude (1xxx - 1860), a known Paris painter and engraver. Learn More...


N. Gratia (fl. c. 1838 - 1865) was a French lithographic engraver and printer active in the late-middle part of the 19th century. His firm printed as Lithographe Gratia. They are frequently associated with the engraving and publishing firm Régnier et Dourdet (fl. c. 1840 - 1870). From 1848 - 1849 N. Gratia partnered with J. Schwaerzlé, publishing under the imprint 'Gratia et Schwaerzlé'. The firm also engraved and printed extensively for the Dépôt de la Guerre. They offices were located at 9, Esplanade des Invalides. Learn More...