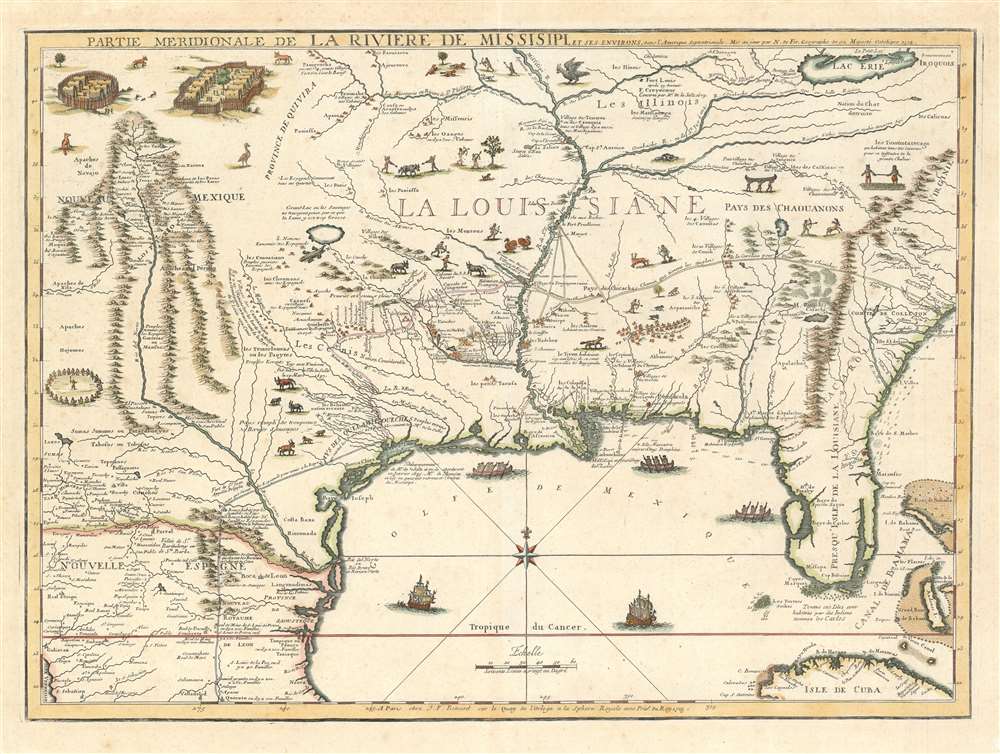 This map is a separate issue of the south-west sheet of a four-sheet map commissioned by John Law and his Compagnie d'Occident (Mississippi Company). The Compagnie d'Occident was a French joint stock company founded by Law to develop and commercialize the French dominated Mississippi Valley. Like similar contemporaneous joint stock companies, such as England's South Sea Company, the enterprise attracted enormous initial interest and investment despite accomplishing little of substance. Instead of developing the Mississippi Valley, as promised, the company's directors, led by Law, focused on attracting more and more investment to keep its stock at a premium and stay afloat – much like the modern-day Ponzi scheme. As part of this scheme, Law commissioned De Fer to prepare new maps to promote the richness and potential of the company's monopoly in French Louisiana and the Mississippi Valley.

A History of the Map

The first edition of this map appeared in 1715 and is very rare today, with only a couple of known surviving examples. This difference between that edition, and this, its 1718 Compagnie d'Occident successor, is striking. This 1718 map is a far more lavish production, with numerous cartographic updates, particularly in the west, and the addition of a plethora of vignettes, including livestock, indigenous people, and other fauna intended to illustrate the region's wealth. The cartographic changes too, are notable. De Fer renames Florida from Presque Isle de la Florida to Presque Isle de la Louisiane, brining it firmly within the prevue of the Compagnie d'Occident's monopoly. There is also a considerable geographical advancement in the lands to the west of the Mississippi, most of which is derived from the explorations of the French Jesuit Missionary Francoise Le Maire. Numerous American Indian communities have been added, often with annotations identifying them as allies or enemies of the Spanish – presumably with the assumption that enemies of the Spanish might be friendly to the French. There are also numerous additional annotations throughout associated with the discoveries of René-Robert Cavelier, Sieur de La Salle (1643 – 1687) between 1673 and 1687, again, clearly with the intent of boosting French claims and exaggerating extent French activity in the region. Additionally, a network of roadways, presented as seemingly great highways, stretch from Charleston to Fort Proudhome on the Mississippi, to La Salle's failed colony of Fort Saint Louis (on Garcitas Creek, near present-day Victoria, Texas) to Valladolid and Queretaro, Mexico. Truly, De Fer's Mississippi Valley appears a land ripe with potential.

The Discoveries of François Le Maire

In addition to this map's association with the John Law and the Compagnie d'Occident, it is also the first published map to incorporate the discoveries of François Le Maire. The results of Le Maire's discoveries appeared in France in 1716, in the form of a manuscript map currently held in the archives of the Bibliothèque Nationale de France. De Fer's map predates Guillaume De L'Isle's map of the same region, published later in the same year, by several months. This map also served as the source material John Mitchell's significant 1755 wall map of North America.

This map was separately published but often added to earlier De Fer atlases post-publication. It also occasionally appears in composite atlases by De Fer and others. It was published by J. F. Benard, of Quai de l'Horloge, Paris. It is fairly well represented in institutional collections but is scarce on the private market.