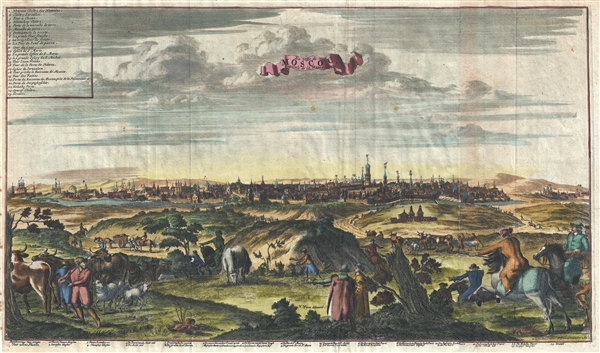 Dramatic view of Moscow in the early 18th century.

This is a beautiful 1729 view of Moscow by Pieter Van der Aa. It depicts the capital of the Tsardom of Russia, Moscow, as it appeared in the early 18th century. Features the countryside in the foreground with shepherds and cattle herders along with hunters. In the distance, the fortified city can be seen with individual buildings clearly identifiable. The most important of these are further identified by a key in top left quadrant and along the bottom of the view.

This view is based on a draft by Nicolaes Witsen, Dutch statesman and mayor of Amsterdam and considered an expert on Russian affairs at the time. This view was engraved in Leiden by Pieter (Pierre) van der Aa.

Very good. Minor wear along original fold lines with some toning along right fold. Minor spotting. Dark Impression.
Looking for a high-resolution scan of this?