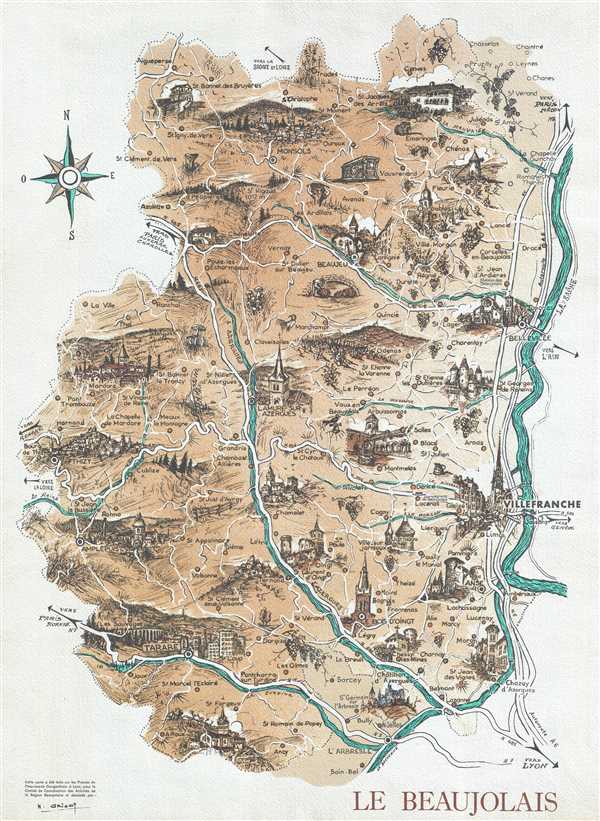 Beautiful map of the wine region where Beaujolais and Beaujolais nouveau are made!

This is a c. 1955 Henri Grisot pictorial map of the Beaujolais wine region of France. The map depicts the region from Chasselas, Chaintré, and Aigueperse to Ancy and the confluence of La Brevenne and La Turdine and from Thizy and Mardore to Villefranche and the Saône River. Beautifully illustrated, numerous cities and towns are depicted by vignettes, including Villefranche, Anse, Tarrare, Amplepuis, and Thizy. Numerous smaller towns are labeled, along with rivers and roads. Illustrations dot the landscape as well, with bunches of grapes and grape vines prominently featured.

The Beaujolais region is not an official department in France; it actually stretches between two different departments. Originally, Beaujolais was a barony that changed hands several times due to deaths and marriages. Today, the region is, of course, best known for its wine. Beaujolais, Beaujolais-Villages, and Beaujolais nouveau all come from this region of France. In all, 12 different AOC (appellation d'origine contrôlée) come from this part of France. The Beaujolais nouveau has become a worldwide celebration, which takes place every year on the third Thursday in November.

This map was created by Henri Grisot. Although it is undated, we have learned that the printer, the Imprimerie Gougenheim, closed its doors in 1960, allowing us to date this map with a slightly better degree of certainty.

Henri Grisot (1919 - 2014) was a French painter and teacher. He was born in 1919 in La Chapelle de Mardore, a small commune in central France and spent his childhood in Ville-sur-Jarnioux, where his parents were schoolteachers. He attended the école normale (écoles normales in France are institutions for training schoolteachers) in Lyon and then became a teacher himself and never left his beloved Beaujolais region. He painted hundreds of paintings using watercolors, India ink, sanguine, and charcoal, among other media. By the late 1970s, he had become the premier painter of the region. He married Jeannine in 1946, and they both served as schoolteachers in Theizé until 1962 when they moved to Villefranche, where Grisot taught until he retired in 1975. After his retirement, Grisot was able to focus on his passion for painting