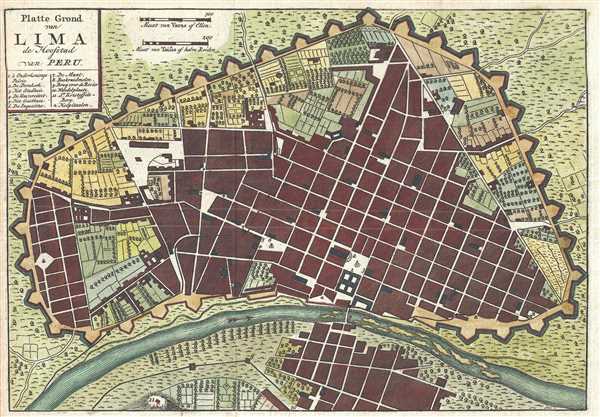 Attractive map of Lima - the capital of the Viceroyalty of Peru.

This is a c. 1767 Isaak Tirion map of Lima, Peru. The map depicts the old city center situated along the Rímac River. Encircled by walls and other fortifications, Lima, as stated in the map's title, was the capital of the Viceroyalty of Peru and had been since 1543. The city walls were built between 1684 and 1687, to guard against attack from pirates and privateers who roamed the Pacific Ocean. Eleven locations are numerically identified in and around the city, with an index located in the upper left corner, just below the title. Some of these locations include the university, cathedral, and city hall. One additional symbol is included in the index, a cross, which indicates the locations of hospitals in the city, of which there are several. While the streets may be unlabeled, the map appears to indicate that not only the city's municipal and residential buildings merited encircling within walls, but also some of the fields and orchards as well.