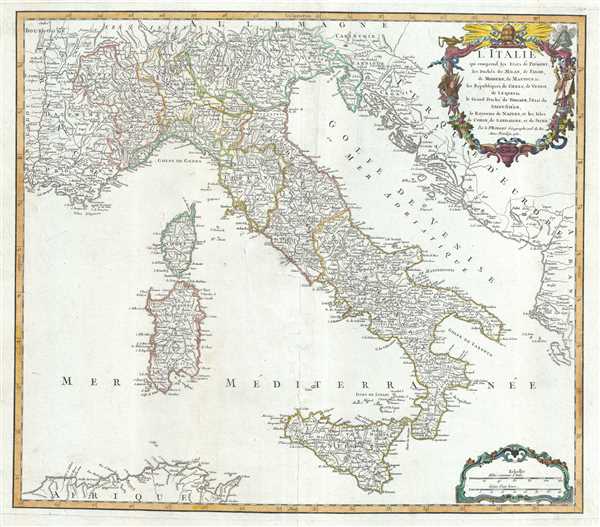 Map depicting Italy before its unification.

This is a scarce 1750 map of Italy by Robert de Vaugondy. It covers from Switzerland south to include all of Sicily. Sardinia and Corsica are also included. The map renders the entire region in extraordinary detail offering both topographical and political information.

This map shows the Italian peninsula prior to its struggle for national solidarity which would emerge as a movement about 50 years later in the early 19th century. The peninsula is divided into numerous independent states, duchies, republics, kingdoms and, of course, the Papal States (States of the Church). These include the states of Piedmont, the Duchy of Milan, Parma, Modena, Mantua etc. the Republics of Genoa, Venice, etc., the Grand Duchy of Tuscany, the Kingdom of Naples and the islands of Corsica, Sardinia and Sicily.

A beautifully engraved title cartouche in included in the top right quadrant. The map was drawn by Robert de Vaugondy in 1750 and published in the 1757 issue of his Atlas Universal. The Atlas Universal was one of the first atlases based upon actual surveys. Therefore, this map is highly accurate (for the period) and has most contemporary town names correct.

Very good. Some wear and toning with verso repair along original centerfold. Minor crease across the map near centerfold. Original platemark visible. Some spotting.

Rumsey 3353.080. Pedley, Mary Sponberg Belle et Utile: The Work of the Robert de Vaugondy Family of Mapmakers, 325.
Looking for a high-resolution scan of this?