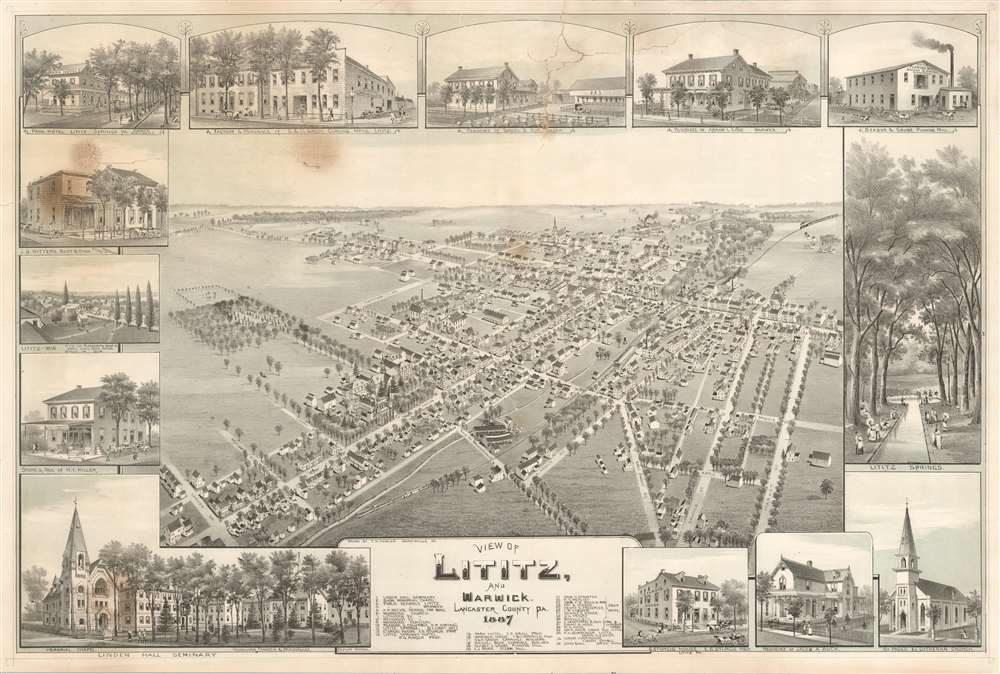 This is an 1887 Thaddeus Mortimer Fowler two-color chromolithograph bird's-eye view map of Lititz and Warwick, Pennsylvania. Overlooking Lititz from a fictional high point east of town, individual buildings are illustrated in profile, and the town's streets are labeled. Thirty-six locations are numerically identified and correspond to an index situated at bottom center. Among these are Lititz Springs Park, the Moravian Church, the Lutheran Evangelical Church, the planing mill, carriage builder, livery stable, and brickyard. Thirteen vignettes create the border and depict buildings around town, including Lititz Springs (now Lititz Springs Park), the Park Hotel, the Seaber, and Grube Planing Mill, Linden Hall Seminary, and St. Paul's Evangelical Lutheran Church.

Lititz, a town of nearly 10,000 people, was founded in 1756 by members of the Moravian Church and named after a castle in Bohemia near the village of Kunvald. For over a century, only Moravians could live in Lititz, and until 1855, only members of the Moravian Church could own houses; anyone else was required to lease. Today, Lititz is renowned in Pennsylvania for its annual Fourth of July celebration, along with its annual art show, antique fair, and the Chocolate Walk. Lititz was the winner of Budget Travel's 'America's Coolest Small Towns' in 2013.

This view was created and published by Thaddeus Mortimer Fowler in 1877. An example is part of the collection at the Library of Congress. A facsimile edition was published in 1980 by Lancaster Echoes.

Thaddeus Mortimer Fowler (1842 - March 17, 1922) was an American cartographer and the most prolific of all American city viewmakers. Born in Lowell, Massachusetts, Fowler enlisted in the Union Army in 1861. He was wounded at the Second Battle of Bull Run and was discharged in February 1863. After his discharge, Fowler made a living by visiting army camps and making tintypes of soldiers. He moved to Madison, Wisconsin, in 1864, to work in his uncle John Mortimer Fowler's photography studio. Fowler likely met Albert Ruger, the famous viewmaker, when he visited Madison in 1867 to work on a view he produced later that year. Ruger had recently lost his last assistant, Eli. S. Glover, who had opened his own publishing firm in Chicago. Ruger probably offered Fowler a job as his sales and subscription agent during this trip, but it is possible that the association between the two men started earlier. Fowler worked for Ruger for two years, as his canvassing and subscription agent in Iowa, Nebraska, and other Midwestern states. It is also likely that Fowler helped Ruger increase his output, since Ruger published around forty views in 1868 and over sixty in 1869. Fowler struck out on his own in 1870 and published two views of towns in Wisconsin: Oconomowoc and Omro. Fowler drew the Oconomowoc view, but Howard Heston (H. H.) Bailey signed the Omro view. Fowler and Bailey would have a professional relationship until Bailey's death in 1878. Bailey's brother Oakley Hoopes (O. H.) Bailey, joined them in 1872. Between 1872 and 1875, the combination of three three names appears almost interchangeably, although Fowler and the Baileys parted ways in 1874. Fowler's name is the only one that appears on lithographs published in 1876. Fowler and O. H. Bailey resumed their professional partnership in 1879 and published several views together, although not all the works are attributed to both men. Between 1887 and 1906, Fowler concentrated on views of Pennsylvania, and produced over 200 lithographs of towns around the state, and his total output during these twenty years exceeded 280 prints. Over the course of his career, Fowler published over 420 prints, of which 248 were of Pennsylvania. Fowler suffered a Fallon an icy street in Middletown, New York, on March 1922 and died a week later on March 17. In his book Views and Viewmakers of Urban America John W. Reps proposes that Fowler was in Middletown promoting the updated view of that town he had recently published. Learn More...

Good. Laid down on linen. Some areas of discoloration. Surface mend with some loss at top center of image.