1776 Santini Map of Lithuania and Belarus 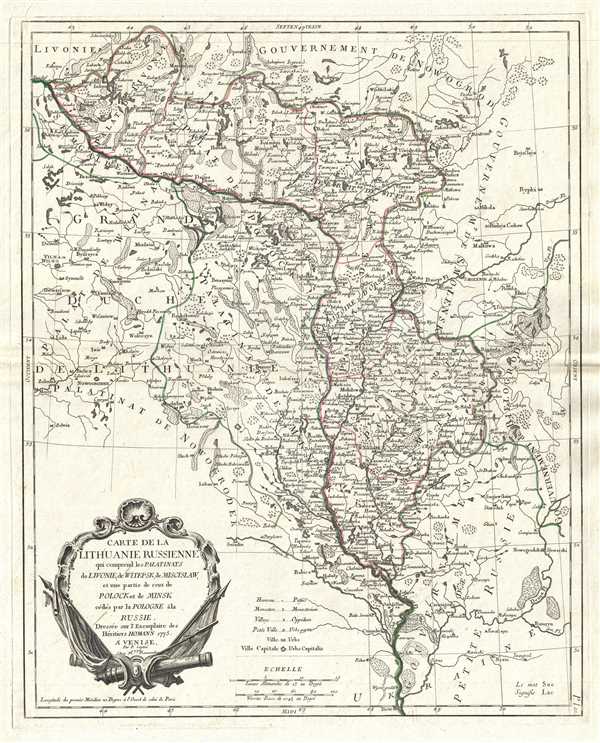 1776 Santini Map of Lithuania and Belarus

Amazing map of Belarus just after the First Partition of the Polish-Lithuanian Commonwealth.
$600.00

This is a 1776 Paolo Santini map of Lithuania and Belarus. The map depicts voivodeships (provinces) in the Polish-Lithuanian Commonwealth, which existed from 1569-1795. Stretching from the Grand Duchy of Lithuania (Grand Duché de Lithuanie) to the Government of Bielogrod (Gouvernement de Bielogrod) and from Livonia (Livonie) and the Government of Nowogrod to the Palatinate (Voidodeship) of Nowogrodek (Palatinat de Nowogrodek) and the Gouvernment of Little Russia (Gouvernment de la Petite Russie). Other labeled regions include the Territory of Witepsk (Vitebsk), the Polock Voivodship (Palat. de Polock), the Palatinate of Minsk (Palatinat de Minsk) and the Palatinate of Livonia (Palat. de Livonie). Numerous cities, towns, and villages are depicted as well as myriad lakes and rivers.

This map was drawn by Santini from a map that was originally by the Homann Heirs a year earlier. Two years before, in 1773, the First Partition of the Polish-Lithuanian Commonwealth was completed. In 1772, Russian, Prussian, and Austrian troops simultaneously invaded the Commonwealth and occupied territory agreed upon among themselves six months prior to the invasion. The occupiers were delighted with their good fortune and expansion at the expense of the Commonwealth, and forced the ratification of the cession through the Polish parliament in September 1773. The Commonwealth lost approximately thirty percent of its territory, half its population, and eighty percent of its foreign trade production. In the following years, Poland was partitioned twice more, eventually leading to complete disappearance of an independent Polish state in 1795. An independent Poland would not reappear until after World War I.

This map was drawn by Paolo Santini and published by Giuseppe Antonio Remondini in 1776.