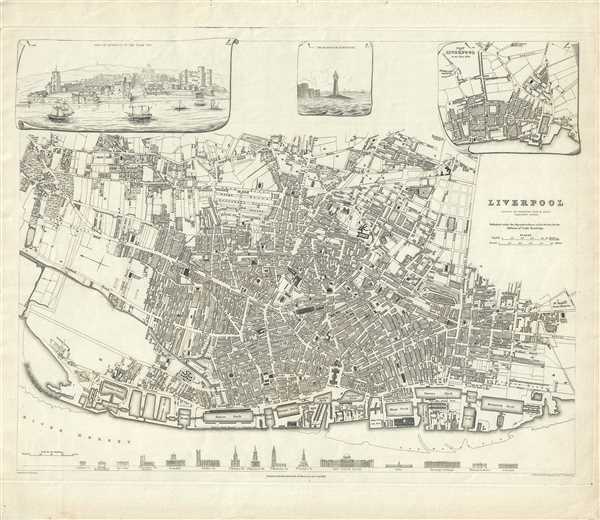 Detailed plan of the bustling port city of Liverpool, England.

This is a nice 1836 first edition map of the city of Liverpool, England issued by the Society for the Diffusion of Useful Knowledge, or S.D.U.K. Highly detailed, the map notes individual streets, buildings, parks, markets and docks. An inset in the top right features a plan of Liverpool in 1729 while another inset depicts a beautifully illustrated view of Liverpool in 1729. An inset illustrating the Black Rock Lighthouse is also included. The bottom of the map includes an artistic profile of some of the most important buildings of the city.

Nineteenth century Liverpool was a bustling port city through which nearly 40% of the world's trade passed. Construction of major buildings throughout the city reflected this wealth. In 1830, Liverpool and Manchester became the first cities to have an intercity rail link, through the Liverpool and Manchester Railway. The population continued to rise rapidly, especially during the 1840s when Irish migrants began arriving by the hundreds of thousands as a result of the Great Famine. By the late 19th century, Liverpool's economy was drawing immigrants from across Europe.

This map is part of A Series of Maps, Modern and Ancient, issued by subscription. Each folder in the series would contain a set of two maps bound together. The map accompanying this folder, not included here, was of Dublin. Original folder includes the names of committee members of the ‘Society’, list of maps previously published, the folder number, which is this case is LXIV, its contents and the printer and publication details. This map was engraved and printed by T. Starling and issued by the Society for the Diffusion of Useful Knowledge’s subscriber’s edition folder. The folder at the time was priced at 1 shilling plain or 1 shilling 6 pence colored. Published by Baldwin and Cradock.

A Series of Maps, Modern and Ancient, 1836.     The Society for the Diffusion of Useful Knowledge (S.D.U.K.) Atlas was initially issued in parts over several years by Baldwin and Craddock to promote the society's mission of egalitarian self-education. The first S.D.U.K. began appearing in 1829 when the society contracted John Walker to produce the first proofs. The first S.D.U.K maps were produced serially by Baldwin and Craddock and issued in 2 map batches, priced at 2 shillings each. The series, originally anticipated to feature 50 maps, ultimately contained 200 and took over 14 years to produce. The initial production was completed in 1844 when the whole was issued in its first compiled atlas edition. Around 1842, following the 1837 bankruptcy of Baldwin and Craddock, publication of the atlas was taken over by the Society itself, who issued editions in 1838, 1839, 1840, 1841, and 1842. Overburdened by the work of publishing, they then outsourced the publication to Chapman and Hall in 1842. Chapman and Hall produced editions in 1842, 1843, and 1844. Dissatisfied with the quality of Chapman and Hall printing, the Society turned to another publisher, Charles Knight, who issued editions under the auspices of the Society in 1844, 1845, and 1846. In 1846 Knight officially acquired the plates in his own right and reissued in revised editions until 1852, when he sold them to George Cox. Cox in turn sold them to Edward Stanford who published them from 1856 well into the 1860s. The S.D.U.K. Atlas is known for the quantity and quality of its maps. The S.D.U.K. published many maps of areas largely ignored by other publishers. The many city plans incorporated into the atlas are particularly admired and are the highlight of the S.D.U.K.'s long map publishing history. As a whole the S.D.U.K. Atlas was groundbreaking in terms of quality, scope, and being offer at a cost effective price point.