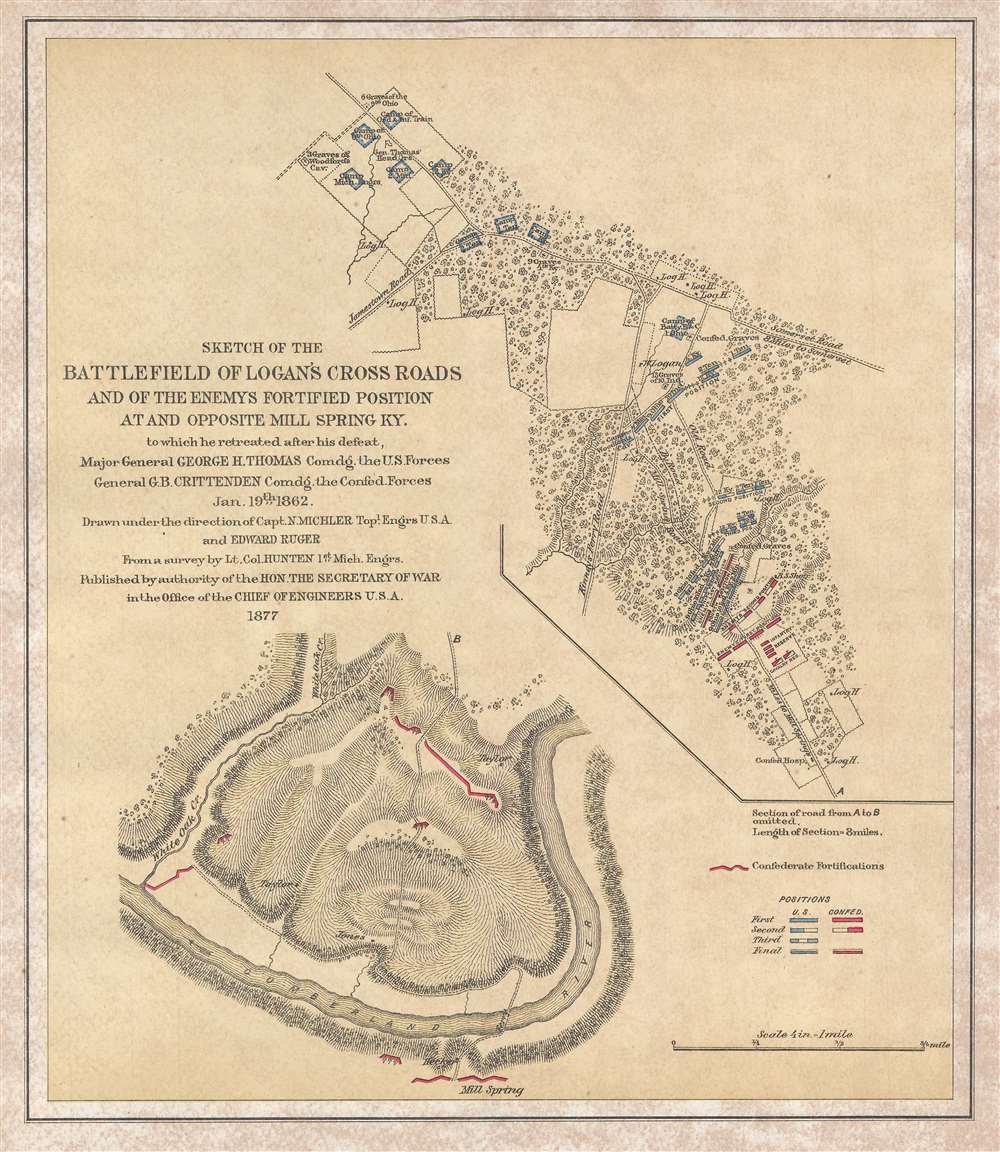 The first significant Union victory during the U.S. Civil War.
$375.00

This battle is known by three different names, depending on where the source referencing the engagement originated. It is known as the Battle of Mill Springs but is also known as the Battle of Fishing Creek in Confederate sources, while Union sources refer to it as the Battle of Logan's Cross Roads. Fought on January 19, 1862, the battle resulted in a Union victory and ended a Confederate offensive campaign in eastern Kentucky. This battle was the first significant Union victory of the war and was celebrated in the Northern press. Soon, however, the battle would be forgotten following Ulysses S. Grant's victories at Fort Henry and Fort Donelson.

This map was drawn by Edmund Ruger and Nathaniel Michler and published in 1877. This piece is fairly well represented in institutional collections, but is scarce on the private market.

Edward Ruger (September 16, 1834 - May 18, 1918) was an American engineer and soldier. Born in Lima, New York, Ruger (one of nine children) was the second son and third child of Thomas Jefferson and Maria (Hutchins) Ruger. Ruger's parents moved to several different towns within the state of New York during his youth, and at one point attended public school in Marcellus, New York. In 1844, Ruger's family moved to Janesville, Wisconsin, where he father served as a home missionary of the Protestant Episcopal church. In Janesville, Ruger attended public school and then the Janesville Academy, where his father was the first principal. However, Ruger only formally attended school for the three winter months of the year, with his father administering his schoolwork during the rest of the year so Edward could work on the family farm. Edward Ruger's father was an accomplished mathematician, which led the younger Ruger to study mathematics and a love of civil engineering and surveying. In 1857, Ruger opened a surveying office in Janesville, bringing with him experience surveying land for the United States, subdividing sections, and making preliminary and locating surveys for railroads and their construction. Ruger was elected city engineer of Janesville in 1859, and county surveyor of Rock County in 1860. He gave up these posts in 1861 when he enlisted in the Union Army and was enrolled as captain of Company A, Thirteenth Wisconsin Volunteer Infantry. He and his regiment left Janesville in January 1862 and moved their way south to Kansas, eventually to Fort Riley. After leaving Fort Riley, he and his regiment were given the task of rebuilding bridges that had been destroyed by Confederate troops. Eventually, Ruger was named a topographical engineer and served in such capacity on the staffs of Major General Lovell H. Rausseau and Major General George H. Thomas. When he joined General Thomas's staff, he was placed in the position of superintendent of the topographical engineer's office of the Army of the Cumberland, a post he kept until 1869. He made surveys and drew maps of the operations of the Army of the Cumberland during the war and the operations of the Armies of the Tennessee and Ohio during the Atlanta Campaign. When Ruger returned to Janesville after leaving the Army, he again opened a civil engineering and surveying office. Beginning in 1874, he was almost completely engaged in hydraulic engineering, receiving contracts in that field from twenty-three different states. Ruger married Sarah B. Wright on August 23, 1862 in Janesville during a thirty-day leave from the Army. He and Sarah had two sons, Frank and Harry. Learn More...