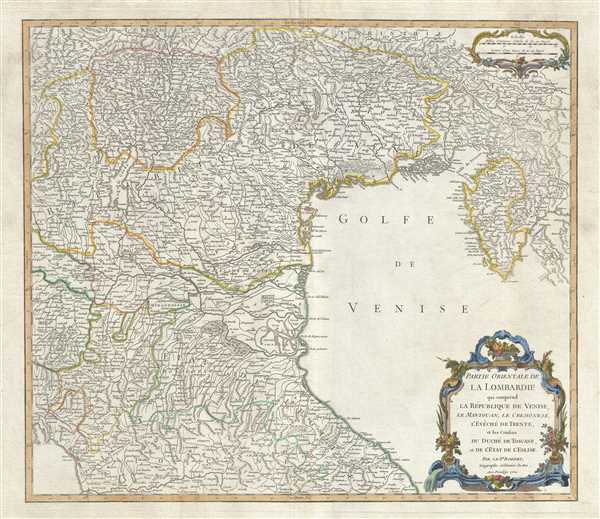 Early map of northeast Italy during the decline of the Republic of Venice.
$350.00

This is an attractive 1750 map of northeastern Italy by Robert de Vaugondy. It covers from Tyrol south past Tuscany and Florence to Pisa and east as far as the Kvarner Gulf. The map renders the entire region in extraordinary detail offering both topographical and political information.

The map depicts the Veneto region and its vicinity during the decline of the Republic of Venice. Italy at this time was a diverse assortment of fiefdoms, religious statelets, and republics in the process of sloughing of rigid control of powerful renaissance dynasties. This process would culminate in the French invasion of northern Italy and the creation of the Kingdom of Italy in 1804.

A beautifully engraved title cartouche is included in the lower right quadrant of the map. This map was drawn by Robert de Vaugondy in 1750 and published in the 1757 issue of his Atlas Universal. The Atlas Universal was one of the first atlases based upon actual surveys. Therefore, this map is highly accurate (for the period) and has most contemporary town names correct.

Rumsey 3353.082. Pedley, Mary Sponberg Belle et Utile: The Work of the Robert de Vaugondy Family of Mapmakers, 334..
Looking for a high-resolution scan of this?