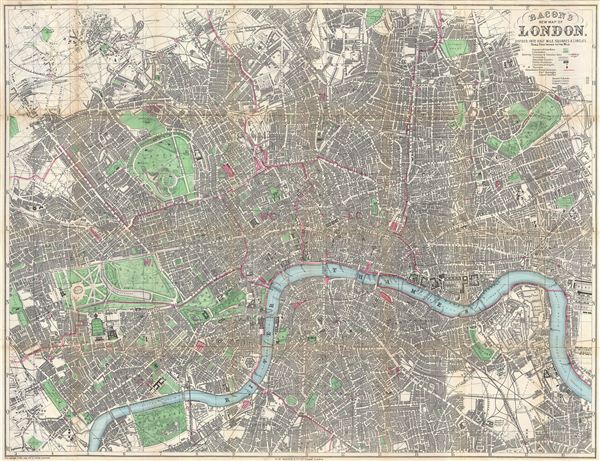 The first edition of one of the best known maps of Victorian London.

A scarce 1876 first edition map of London by G. W. Bacon. Centered on the Thames River, the map covers from Hampstead to the West India Docks and from Camberwell to Notting Hill. It is divided into both a grid of 1/2 mile squares, which are numerically identified at the border, and 1/2 mile circles from Charing Cross. Various parks, including Hyde Park, Kensington Gardens, Green Park, St. James Park, Battersea Park, Regents Park, and Victoria Park, among others, are shown in beautiful detail. All streets, important buildings, neighborhoods, rail lines, and bridges are identified. Postal districts are highlighted in light red.

Bacon's map was one of the most popular and widely published maps of Victorian London. Multiple variants exit to about 1900. The present example is identifiable as the first edition due to the absence of Clerkenwell Road, which was built in 1879 but appeared preemptively in the 1878 second edition of Bacon's 'New Map of London.'