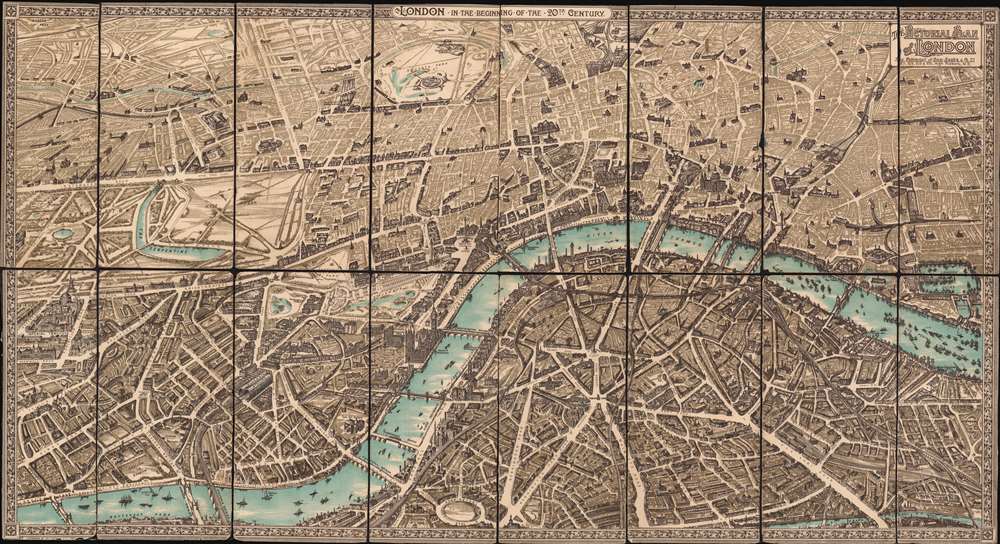 A striking chromolithograph Edwardian Era pictorial plan of London issued in 1901 by Charles Baker and Co. Ltd. Centered on Charing Cross, the map covers from Albert Bridge and Kensington Palace to the London Docks and Southwark Park. It extends south to the Grand Surrey Canal and north to include all of Regents Park and Kings Cross Station. The cartographer combines pictorial elements with axonometrical style mapping in which important buildings are represent from equidistant elevated perspective - similar to the great 1738 Bretez/Turgot Plan of Paris, if not on so grand a scale.

This map was an advertising piece designed to promote Charles Baker and Co. Ltd. (1865 - 1939), prominent gentleman clothiers active in London from the mid 18th to the to the mid 20th century. They specialized in elite schoolboy clothing as well as uniforms and formalwear - including custom work. The map was sold in Chas. Baker stores as well as incorporated into their A.B.C. Guide to London. Despite large printing runs, up to 30,000, the map was ephemeral in nature and few survived.

Although stated nowhere on the map, the plan was like issued by John Bartholomew and Sons, one of the premier cartographic printing establishments in London. Editions of the map date to as early as 1897, but are today uncommon on the market.