1582 Braun and Hogenberg Map of London 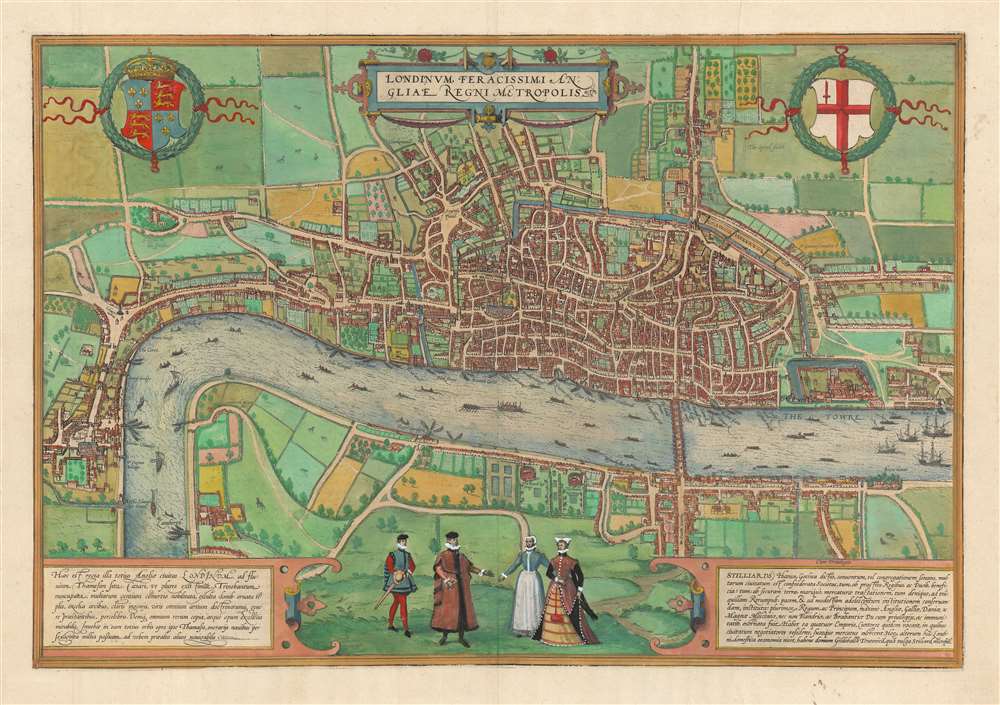 1582 Braun and Hogenberg Map of London

This is Georg Braun and Franz Hogenberg's plan of London, the first surviving, single-sheet, printed map of London. The significance of this seems not to have been lost on the authors, who made it the first plan to appear in their Civitatis Orbis Terrarum, which was the first dedicated collection of city plans and views published. It is one of the few acquirable depictions of the city made prior to the Great Fire of 1666 (Howgego notes that it was the Great Fire itself, and the problems attendant to land ownership and rebuilding that led to proper surveys of the city in the first place.) London here is represented as it was during the lifetime of Elizabeth I, and William Shakespeare - the beginnings of the Southwark theater district can be seen, although the locales featured there on this plan are bull and bear baiting rings. To the north, development beyond the medieval walls of the city can be seen beyond Aldgate. Though not named, the Strand can be clearly seen as the primary link between the city proper and Westminster via Charing Cross. Along the river, named palaces of nobility can be seen with their water gates facing the waterfront.

Typical of Braun and Hogenberg's views, the city here is laid out as a plan, but the buildings and surrounding landscape are presented in elevation - thus giving the impression of a bird's eye view, even to the extent of detailing gardens (including the shadows cast by trees) and showing bustling river traffic. Also, as with other Braun and Hogenberg plans, the artists have included four figures in the foreground: a nobleman and woman, with their attendant maid and footman (he, armed with a sword and buckler), each dressed in the styles of the period appropriate to their positions.

London as an International Trading Center

The wonder of the city, at the time, was its rapid growth and fruitfulness (the descriptive word in the title, 'Feracissimi,' means 'most fruitful.' The Latin text on the lower left praises the city not only for its churches and palaces but also for the excellence of its men of art and science. It notes the city's position on the Thames, and that it receives via the Thames 'the wealth of the whole world.' The significance of London as a trade city may be additionally emphasized by the text at the lower right praising the Hansa Confederation, whose guild hall, the Stilliards, is depicted prominently on the north shore of the Thames just upstream of the Bridge. Stilliards is now buried under Cannon Street Station, but it represented a foothold in London of the most powerful foreign element in Medieval London.

'Steelyards' was an Anglicization of 'Stapelhof,' and it was a combined stronghold, warehouse, counting-house and residency for the Hanseatic League, whose traders spanned northern Europe reaching back to the Middle Ages. It represented a key link between London and Hamburg, Cologne, and other European ports. The Hansa were allowed liberty to trade throughout England, in return for which they maintained London's Bishopsgate, and pledged to provide a third of its defenders in time of war. The Hansa imported foodstuffs as well as the material for shipbuilding and maintenance. The positioning of Stilliards would, as London grew in importance, become an impediment: larger ships were unable to pass the bridge to upstream warehouses. By the time this plan was made, the Hansa were losing their grip on London's trade in favor of indigenous traders, and indeed Elizabeth I would command the Hansa to leave London completely in 1597.

Although the first state of this plan was printed in 1572, it is based on an earlier work which has not survived in completion. Saint Paul's is shown with its spire intact: this burned in 1561, and Suffolke Place has not yet been renamed to York Place, which occurred in 1557. It is thought to have been reduced from a now-lost fifteen-sheet plan of the city, the so-called 'copperplate map' of which only three plates now survive. The authorship of the 'copperplate map' is not known, but it has been speculated that the Hansa in London played some part in its production, even commissioning the work - resulting in the laudatory paragraph to the Stillyards and the Hansa that survives on the present engraving.

This plan was engraved by Franz Hogenberg for inclusion in the first, 1572 edition of Braun and Hogenberg's Civitatis Orbis Terrarum. The present example corresponds to Howgego's 1574 second state of the plan (with the change of the name 'Westmester' to 'Westmunster,' and depicting the trapezoidal Royal Exchange) The map appeared in every edition of the Civitates and is reasonably well represented in institutional collections.

Braun, G. and Hogenberg, F., Civitates Orbis Terrarum, (Antwerp) 1574.     The Civitatus Orbis Terrarum is an 6-volume atlas of cities, or town book, compiled and written by George Braun, Canon of Cologne Cathedral and Franz Hogenberg. Braun and Hogenberg gathered together vast amounts of information and draft plans to produce over 500 city views/maps published in six parts between 1572 and 1617. Most of the town views and plans were engraved by Simon van den Neuvel (Novellanus) and Frans Hogenberg, many after drawings by Joris Hoefnagel. The Civitatus Orbis Terrarum was printed in Cologne, but in the Flemish style after Abraham Ortelius, the preeminent cartographer of the period. The text throughout is the work of Braun. The work proved to be a great success, reflecting the period's greater fascination with notable metropolises than with national boundaries. After the initial publication of volume 1, the popularity of the led to a second volume. In the introduction to volume 2, Braun requests that those who live in cities not represented, sent details of their own metropolises. This led to the publication of volumes 3, 4, and 5. Volume 6, the last, did not appear until 1617 under Franz Hogenberg's son, Abraham Hogenberg. The volumes include New editions Civitatus Orbis Terrarum continued to be released until roughly 1640. In general, the plates and text remained unchanged.