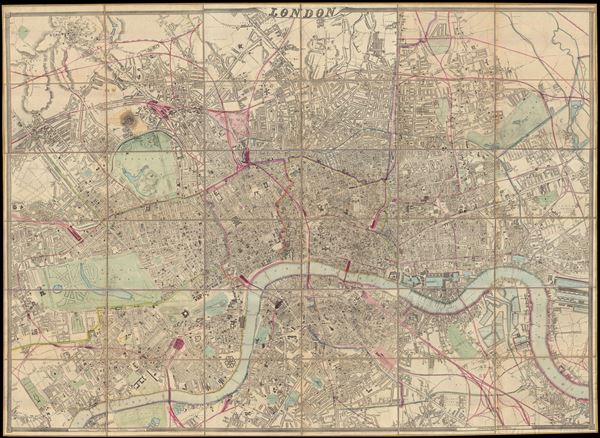 A remarkable and monumental map of London, this is Weller and Cassell's 1866 wall map of London. When it was first issued in 1861 this was the largest scale map of London yet produced. Cassell was justly proud of his map bragging, 'as well as being the largest, [Cassell's Map of London] is universally admitted to be the best map of London ever produced.' The map covers from Upper Holloway to Poplar and From Kennington to North Kensington. On a scale off roughly 9 miles to the inch, Cassell's map offers stupendous detail throughout, noting all streets, as well as rail lines, important buildings, gardens and parks, and notes o new constructions. This last is particularly significant in regard to this map, as it was updated extensively by John Dower in 1866 to reflect numerous major civic projects and improvements then in progress. Dower's revisions, reflected in this edition included 'upwards of 2000 improvements and alternations … to the plates, including the addition of 9000 new street names.' Among these are a several highly anticipated projects including the 'New Blackfriars Bridge,' the 'Waterloo and Whitehall Railway Bridge,' the Holborn Viaduct,' and the 'Thames Subway Intended,' among others. Cassell issued this map to compete with Edward Stanford's similarly large scale 'Stanford's Library Map of London.' The Cassell map is larger both in dimensions and scale, but the Stanford map covers a great area. As London map scholar Ralph Hyde points out 'both maps are indispensable for any study of London during this period.'

Cassell working with engraver and cartographer Edward Weller originally published this map in segments issued weekly in the Weekly Dispatch. It was also published in Cassell's Family Paper, Cassell's British Atlas, and issued independently both on rollers and segmented (as the present example) on linen. The present example is the 1866 (Dower Revision) 6th recorded state. This is the largest original map of Victorian London obtainable.


Edward Weller (July 1, 1819 - 1884) was a cartographer and engraver based in London. Weller was a nephew of another well-known map publisher Sidney Hall, who gave him 50 Pounds to pay his apprenticeship fees. He engraved for many prominent mapmakers and was active enough in the community to be recommended for membership to the Royal Geographical Society in 1851 on the recommendation of John Arrowsmith, among others. He eventually inherited the Sidney Hall map business which led him to follow Arrowsmith as the unofficial geographer to the Royal Geographical Society. Weller was among the first map printers in London to embrace lithography. His best known work appears in Cassell's Weekly Dispatch Atlas, published in monthly segments for subscribers of the 'Weekly Dispatch' newspaper. This collection of maps eventually grew to include much of the known world. Published in various editions from 1855 through the early 1880s. Weller died in May of 1884, leaving behind a successful business and an unhappy widow. His son, Francis Sidney Weller (1849 - 1910), followed in his father's footsteps and continued the family map business. The atlas Mackenzie's Comprehensive Gazetteer of England and Wales was published in 1894 and bore F. S. Weller's signature on the maps.


John James Dower (June 1, 1825 - 1901) was a well-respected mapmaker, print seller, and publisher based in London, England. Dower is the heir to the more prominent London engraver and mapmaker John Crane Dower (1791 - 1847). Dower worked with many prominent middle to late 19th century London map publishers including Weller, Cassell, Bacon, Petermann, and others. He was elected to the Royal Geographical Society in 1854. Dower also published on maps his own account including one atlas and various school geographies. In addition to his cartographic work, Dower is well known as an engraver of military scenes.

Very good. Dissected and mounted on linen. Comes with custom made book box.