1885 Collingridge City Map or Plan of the City of London 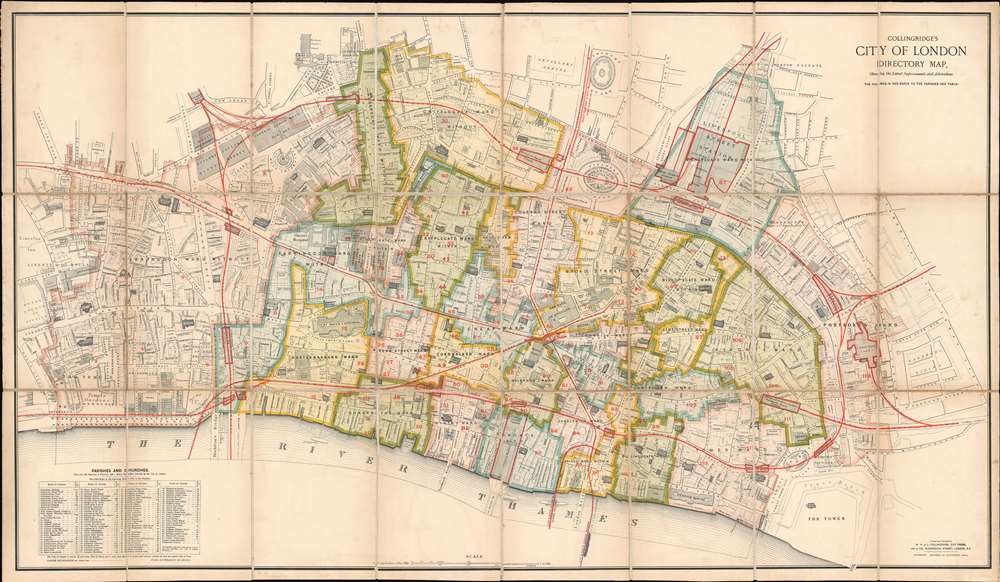 1885 Collingridge City Map or Plan of the City of London

This is a rare first edition 1885 William Hill and Leonard Collingridge city map or plan of the City of London. The map depicts the city from the Royal Courts of Justice to Goodman's Fields and from Goswell Road to the Thames River and the Tower of London. Meticulously detailed, individual buildings throughout the city are illustrated. Churches are the most easily identified, as they are shaded with black diagonal lines. St. Paul's Cathedral is situated in the lower left quadrant. Halls, banks, offices, colleges, post offices, hospitals, and police stations are all identified. Squares and streets are labeled throughout. City wards are labeled in block lettering and outlined and shaded in various colors to allow for easy differentiation. The red numbers identify parishes. Rail lines are highlighted by thick red lines, which also outline rail stations. Wonderful detail is included as well, such as the trees illustrated along Victoria Embankment, in the Temple Gardens, and along King's Bench Walk.

This map was created by William Hill and Leonard Collingridge and published by their press City Press in 1885. While the different editions of this map vary in rarity, this is the only known example of the 1885 first edition.

William Hill Collingridge (fl. c. 1846 - 1894) was one of the partners in W.H. and L. Collingridge, a printing firm William founded and later operated with his brother Leonard Collingridge (1837 - March 24, 1900). The Collingridge Brothers also founded City Press, which published a newspaper of the same name from 1857 until 1871. William Collingridge sold his share of the firm to Leonard and three younger members of the family, John, Leonard Thomas, and Hugh Collingride, in June 1894. William Collingridge was also the author of several books, including How to Woo, When, and to Whom, originally published in 1855, and the Comprehensive Guide to Printing and Publishing: A Manual of Information on Matters Connected with Printing, Publishing, etc. etc..