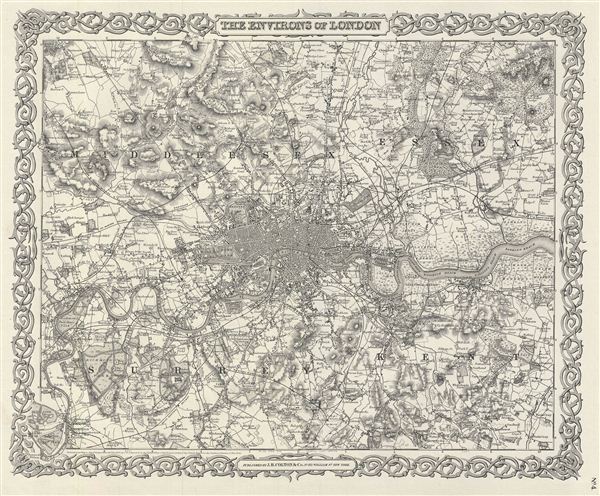 A fine map of London at the outset of the Victorian Epoch.

An excellent 1855 first edition example of Colton's map of London and the immediate vicinity. Includes parts of Surrey, Kent, Middlesex and essex. extends north to Southgate, east to Chadwell Heath, south to Kingston, Mitcham and Bromley, and west to Harrow and Isleworth - on a scale of 5/8 of an inch to the mile. This is most likely the one of the first maps of London to appear in an American atlas. The world's largest city from 1831 to 1925, London is beautifully detailed to the level of individual buildings, trees, canals and roads. Includes topographical details as well as farms, parks, river ways, and swamps. Surrounded by Colton's typical spiral motif border. Dated and copyrighted to J. H. Colton, 1855. Published from Colton's 172 William Street Office in New York City. Issued as page no. 4 in volume 2 of Colton's 1856 Atlas of the World.