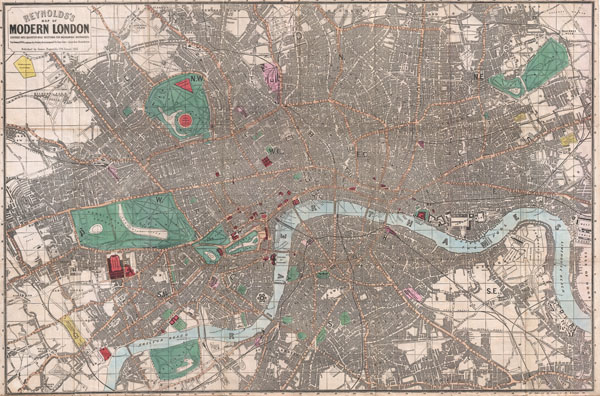 A pristine example of James Reynolds' 1662 pocket map of London, England. Covers the center of London from Notting Hill to the Isle of Dogs and from Kentish Town to Battersea Park. Details every street, parks, train station, bridge, monument, pier, and government building. Tourist destinations such as the Botanical Gardens, the Zoo, Buckingham Palace, the Tower of London, and the British Museum are highlighted in red. In addition to existing streets and buildings, Reynolds' also details a proposed embankment along the northern shore of the Thames from Westminster Bridge to Blackfriars Bridge. This eventually evolved into the Victoria Embankment, which was constructed roughly as proposed between 1865 and 1870. This map folds into its original linen binders and is accompanied by a short visitors guides features notes on exhibits, museums, and galleries as well as a street index and an assortment of advertisements.

Reynolds first issued this map in 1857. It went through some thirty two subsequent editions eventually evolving into Smith's Tape Indicator Map of London. This edition, the sixth, is notable for its inclusion of the Victoria Embankment – a novelty given that work on the embankment did not begin until three years after this map was printed.