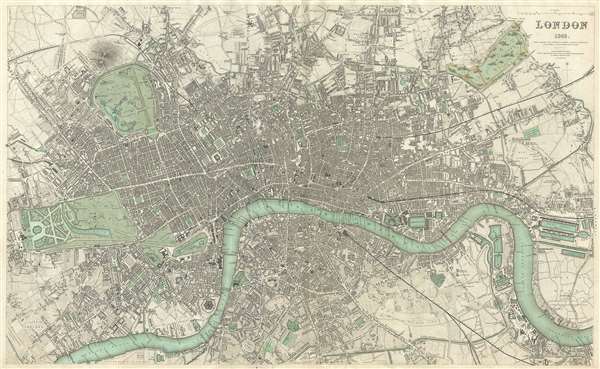 A beautiful 1843 map of London, England, from the 1844 Chapman and Hall edition of Maps of the Society for the Diffusion of Useful Knowledge. Updated from the original printing of 1835, this map covers central London from Buckingham Palace to the West India Dox. It extends south to the Oval and north as far as Kentish Town. The whole is finely engraved with most individual street microscopically labeled.

There at least five states of this map, this being the earliest according to Howgego. There is an earlier edition (Howgego 354), which is similar in size and scope, but bears two views present in upper right corner and is a separate engraving. The present example, from 1843, bears the Benjamin Rees Davies imprint.

Knight, C., Maps of the Society for the Diffusion of Useful Knowledge, (London) 1844.