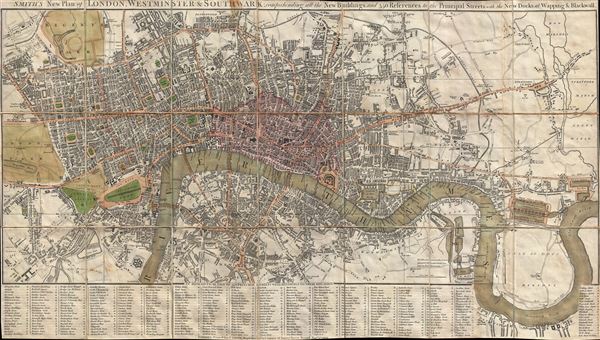 Scarce pocket map of London, edition not in Howgego.

A scarce 1822 dissected pocket map of London, England, by Charles Smith. Centered on the Thames River, this map covers from Paddington to Greenwich and from Chelsea Common to Stratford. The City of London is highlighted in Red and major arteries appear in dark yellow. All major streets, docks, bridges, and important buildings are identified. An index along the lower border identifies all streets in alphabetical order and references a numeric grid system on the map proper. Smith first issued this map in 1801. In 1817 the map was expanded, as seen here, to include the Isle of Dogs and the East India Docks. Howgego sites more than 20 editions to about 1841. The present edition, however, is not included in Howgego, an indicator of its rarity, but fits between Howgego 225.13 and 225.14.

Howgego, James L., Printed Maps of London circa 1553-1850, 255 (this spedific edition not listed)
Looking for a high-resolution scan of this?