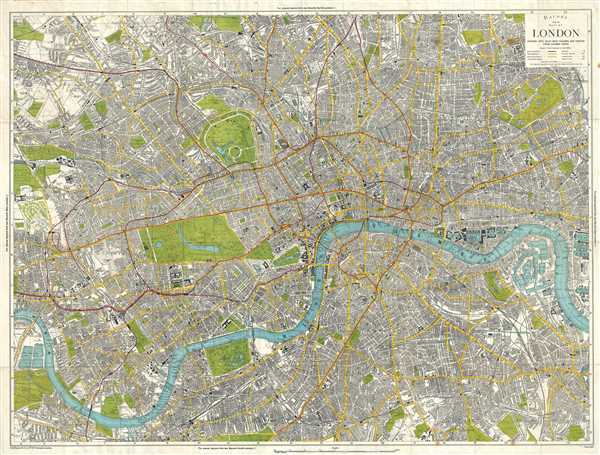 This is a beautiful and large c.1890 city plan or map of London by G. W. Bacon. Centered on the Thames River, the map covers from Hampstead to Lapham Common and from Gladstone Park to West Dock. It is divided into both a grid of 1/2 mile squares, and 1/2 mile circles from Charing Cross. Various parks, including Hyde Park, Kensington Gardens, Green Park, St. James Park, Battersea Park, Regents Park, and Victoria Park, among others, are shown in beautiful detail. All streets, important buildings, neighborhoods, rail lines, and bridges are identified.

Bacon's map was one of the most popular and widely published maps of Victorian London. Multiple variants exist to about 1900. This map was published by G. W. Bacon and Company Ltd. In c.1890.

Very good. Minor wear along original fold lines with some verso repairs. Minor foxing at places.
Looking for a high-resolution scan of this?