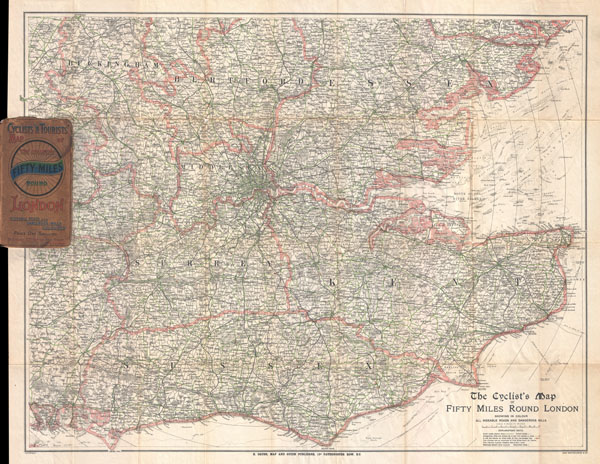 This is J. Bartholomew's c. 1895 cyclist's may of 50 miles around London. Covers the greater London area from Ricester in the northwest eastwards and southwards as far as the coast. Includes the counties of Buckingham, Hertford, Essex, Middlesex, Surrey, Kent, and Sussex. By the end of the 19th century bicycling in London (and vicinity) had evolved beyond recreation to become a practical way to get from place to place. Cyclist's maps, like this one, began appearing around 1870 and continued to be published well into modern times. Map shows town, rivers, forests, parks, roads and all practical bicycling routes. Mileage from London is noted in ten mile increments. Curiously for a cycling map, this map also shows various offshore shoals, sandbars, and shipping routes. Attached to an extremely attractive decorative binder.