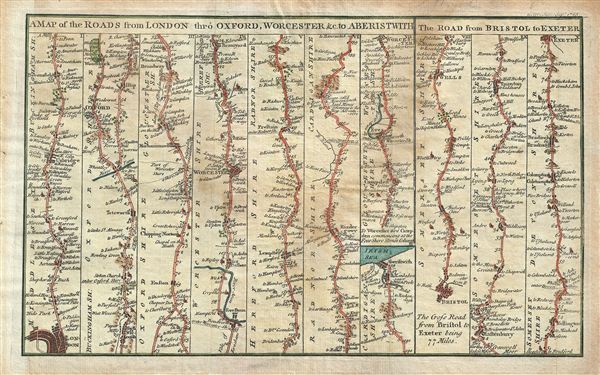 This is a scarce 1765 example of the map of the roads from London to Aberystwyth and from Bristol to Exeter published in the Gentleman's Magazine. Essentially two maps on one sheet, features ten road strip maps through Middlesex, Oxfordshire, Gloucestershire, Worchestershire, Herefordshire, Radnorshire, Cardiganshire, Somersetshire and Devonshire. Several towns with distances are noted, including London, Oxford, Worcester, Evesham, Aberystwyth, Bristol and Glastenbury. This map was issued in 1765 as part of the Gentleman's Magazine.

The Gentleman's Magazine (fl. c. 1731 - 1922) was an English periodical founded by visionary Edward Cave. Considered the world's first monthly general interest magazine, GM was also known as Trader's Monthly Intelligencer. Cave's innovation was to create a monthly digest of news and commentary on any topic the educated public might be interested in, from commodity prices to Latin poetry. It carried original content from a stable of regular contributors, as well as extensive quotes and extracts from other periodicals and books. Cave, who edited The Gentleman's Magazine under the pen name "Sylvanus Urban", was the first to use the term "magazine" (meaning "storehouse") for a periodical. The iconic illustration of St John's Gate on the front of each issue (occasionally updated over the years) depicted Cave's home, in effect, the magazine's "office". Among the important firsts of the The Gentleman's Magazine are the first use of the term "magazine" for a periodical and the first regular employment of lexicographer Samuel Johnson.

Good. Mild acid burn at center of map - more apparent from verso. Blank on verso. Original platemark visible.
Looking for a high-resolution scan of this?