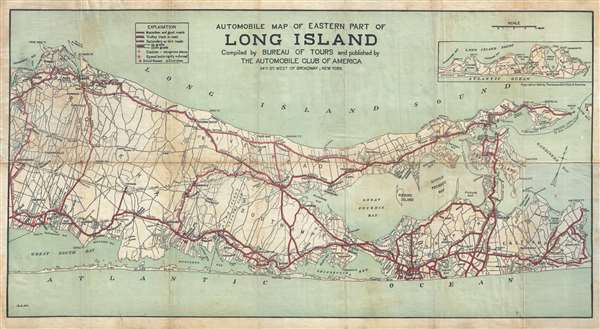 This is a rare linen map of Suffolk County, Long Island, New York, including the Hamptons, prepared by L. B. Mork for the Automobile Club of America. The map extends from Stony Brook and Sayville east, past Southampton, Easthampton, Bridgehampton, Greenport, and Shelter Islands as far as Plum Island on the North Fork. An inset map in the upper right extends the map's coverage on the South Fork as far as Montauk. Cartographically this map is based on surveys of the region completed by the U.S. Geological Survey in the 1890s.

This is a driving map and as such paved (macadam) roadways are highlighted in red. A key in the upper left identifies different types of roads as well as 'dangerous spots' such as railroad crossings, and towns, such as Center Moriches and Patchogue, where speed limits are aggressively enforced.

This map was copyrighted in 1808. There appear to be several editions with few changes between the states. Some examples bear the imprint of L.B. Mork in the upper right, others do not. All bear the A.L.W. imprint in the lower left corner, although who this may refer to we have been unable to determine.

This map appears to be extremely rare. We have identified only a single institutional holding at Yale University's Beinecke Rare Book and Manuscript Library.

The Automobile Club of America (fl. 1899 - ??) was originally founded by 25 men on June 7, 1899 at the Waldorf-Astoria Hotel in New York City. The ACA was the "pioneering club on motoring" and was also responsible for leading the Good Roads Movement, an effort to improve dangerous road and street conditions throughout the United States. The group was driven by not only a love for the fledgling automobile industry, but a desire to see it grow and expand beyond what others imagined. The ACA felt a large and influential body was needed to ensure the success and continued growth of the automobile community. They organized and encouraged automobile exhibitions, along with motor races and other varied automobile activities. At the time motorists faced trouble and harassment by many in the community, and the ACA worked to bring about understanding and acceptance of what many saw as "just a fad." The group grew and in time published numerous road maps, books, and other articles for motorists, bicyclists and aviators. Learn More...