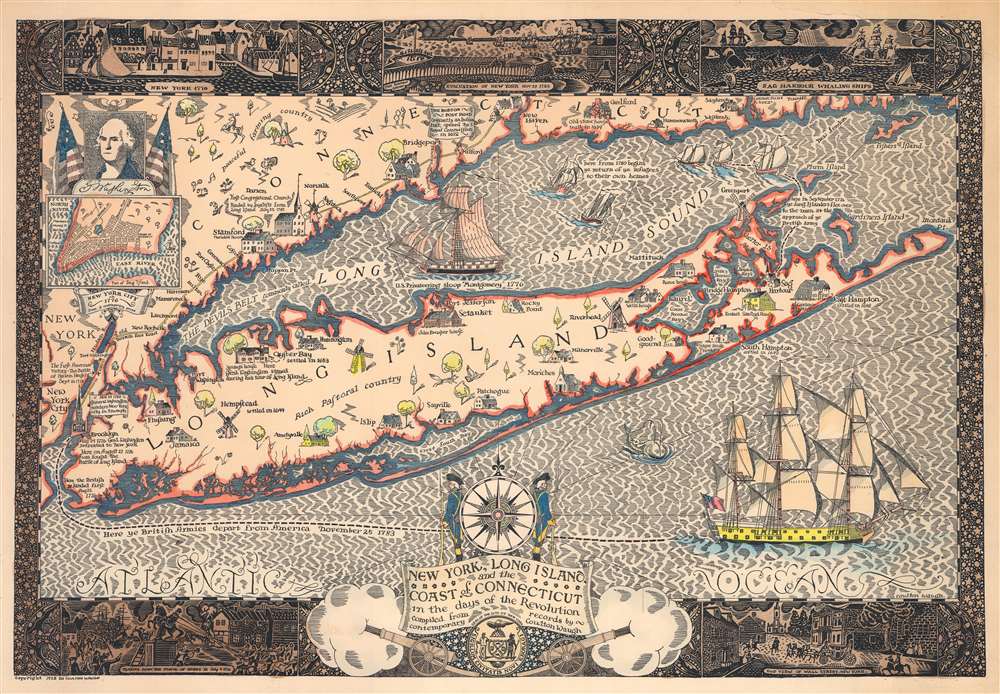 This is a 1928 Coulton Waugh pictorial map of Long Island during the American Revolution. It is one of Waugh's rarer maps and the first example we have seen on the market. In general, Waugh's are admired for their rich inkwork reminiscent of 16th century Dutch Golden Age cartography, as well as for their graphically dense borders combining decorative elements with historical vignettes.

Waugh uses vignette illustrations of houses, churches, and windmills (along with other buildings) to mark settlements throughout Long Island and along the Connecticut coast of Long Island Sound. Some towns appear with their founding year. The Boston Post Road is illustrated as a yellow line along the coast from New York to New Haven. Short accounts of important Revolutionary War events, such as the British landing on Long Island, General Washington's retreat from Brooklyn, the Patriot victory at the Battle of Harlem Heights, and General Washington's triumphant return to New York in 1783. A black dashed line in the Atlantic Ocean traces the British departure from America on November 25, 1783. The whole is surrounded by a pictorial border that includes vignettes of New York burning in 1776 and New Yorkers tearing down the statue of King George III.

This map was created and published by Coulton Waugh in 1928. It is among Waugh's least common maps. We note three examples cataloged in OCLC which are part of the collections at Dartmouth College, the Buffalo and Erie County Public Library, and the Cleveland Public Library. An example is also part of the David Rumsey Map Collection. A fifth cataloged example is part of the American Geographical Society Library at the University of Wisconsin-Milwaukee. Extremely scarce to the market.

Frederick Coulton Waugh (March 10, 1896 - May 23, 1973) was an American artist, painter, and writer based in Provincetown, MA and later Newburgh, New York. Waugh was born in Conwall, England. He immigrated to the United States in 1907, settling in Philadelphia with his father, maritime painter Frederick Judd Waugh (grandson of portraitist Samuel Waugh). Coulton enrolled in New York's Art Students League where he studied with George Bridgman, Frank Dumond, and John Carlson. In 1916 he took work as a textile designer before moving to Provincetown, in 1918, to open a model ship and hooked rug shop. Coulton is famous for his work in the comic strip Dickie Dare and his book The Comics, a comprehensive study analyzing comic strips and detailing their history. Coulton also taught art and wrote instructional and educational art books and edited home study course art textbooks. A professional sailor, he drew historic ships and created decorative maps. His 'serious' paintings, first displayed at the Hudson Walker Gallery in New York were, according to one writer, 'enough to give his father's admirers the jitters.' In terms of cartography, Waugh is known for producing several pictorial maps including a 'Map of Silk,' Provincetown (1924), Cape Cod (1926), Cape Ann (1927), Old Cape Cod (1930), Long Island, and the Hudson River (1958). He also issued a map of California (1940) in collaboration with his wife, Odin Burvik (aka Mabel Burwick). Learn More...