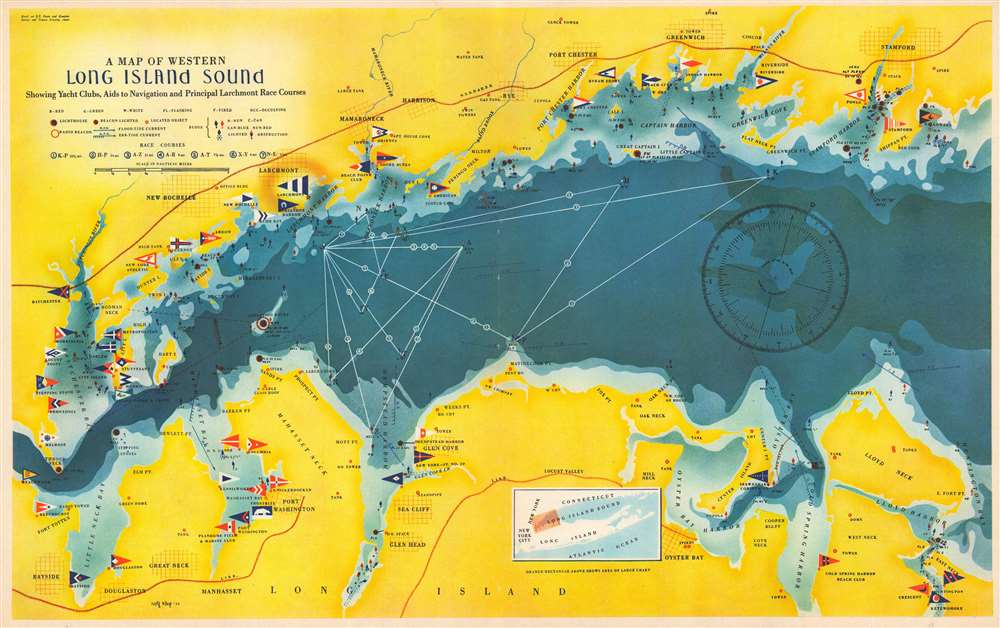 This is a delightful 1939 Rolf Klep pictorial map of western Long Island Sound. It covers the waters off Westchester County, Fairfield County, and the ‘Gold Coast’ of Long Island, specifically those frequented by the members of the Larchmont Yacht Club. A note on the verso describes this as ‘a Yachting Paradise’ and ‘the most populous yachting center in the world, with about fifty clubs lining some seventeen miles of Long Island Sound.’ The locations of indeed fifty yachting clubs are marked with flags on the map, as are lighthouses, buoys, and radio beacons. The routes of seven Larchmont Regatta race courses are shown in white overlapping triangles throughout the Sound. Though soundings are not numbered, depths are indicated by varying shades, the darkest showing the deepest water, over 120 feet. Ebb and flood tides are marked on the map with arrows, as are key landmarks used by yachtsmen to take compass bearings - chimneys, domes, water towers and even specific houses. Despite the map’s richness of detail, the author of the article it accompanied was at pains to explain that ‘though accurate, this map should not be used for navigation’ directing the reader instead to consult the U.S. Coast and Geodetic Survey and Texaco cruising charts from which the map’s data was drawn.

Labor of Love by a Self-Proclaimed ‘River Rat’

While the mapmaker and illustrator Klep would become famous for his cutout diagrams of aircraft, ships, and spacecraft of the future, he had a love of sailing. He grew up on the Columbia River in Oregon, worked deck jobs on tourist ferries, and nurtured a lifetime fascination with the ships around him. On his retirement, Klep would return to Oregon to found the Columbia River Maritime Museum.

This map was produced in one edition, appearing in a 1939 Fortune Magazine. It only appears catalogued as a separate map once in OCLC, in the Harvard University Botany Libraries. Neglected rather than rare, examples appear on the market from time to time.

Rolf Klep (1904 - 1981) was an American artist and illustrator. His work featured in many of the most popular magazines (Fortune, Newsweek, Colliers, Life, Look, Women’s Home Companion among many others) covered a wide range of subject material, particularly maritime. Beginning in the 1950s, space travel and exploration captured his attention. During the Second World War, he was in charge of graphic arts production in the Office of Chief Naval Operations. Follwing his 1962 retirement, Klep returned to his nautical interests, helping found the Columbia River Maritime Museum. Learn More...