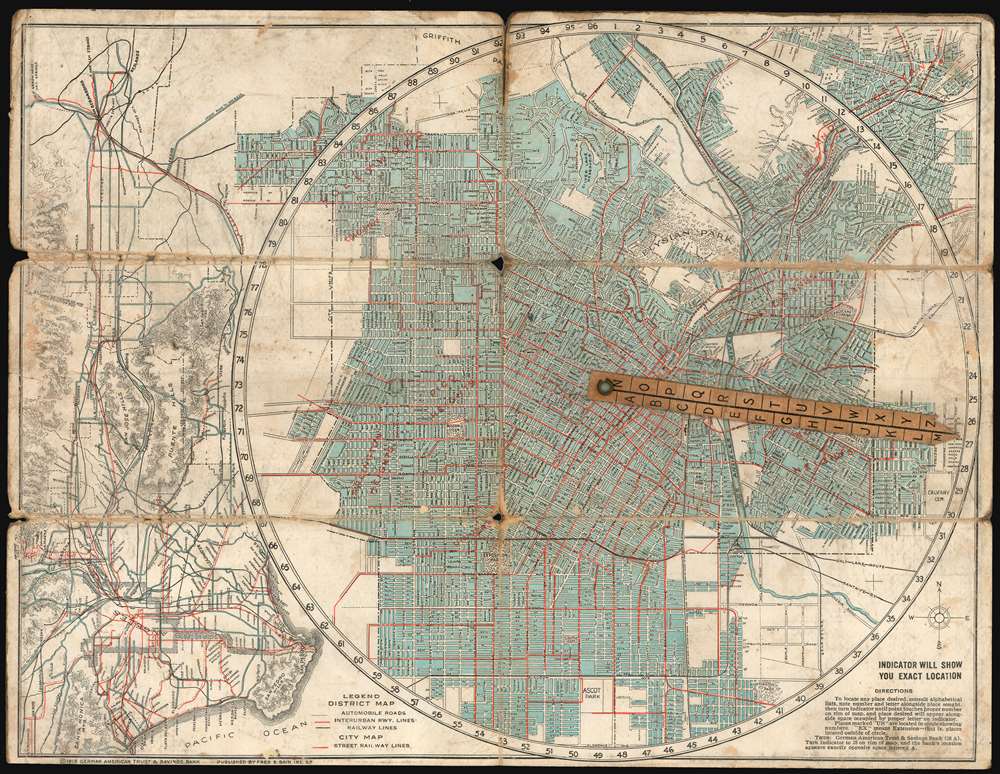 The earliest example we have found, dated 1915, of this ingenious and detailed map of Los Angeles and its surrounds. Produced by the advertising firm of Fred B. Bain, it was received by a grateful world, as testified by a doubtless completely unbiased party in the October 1916 Long Beach Press:

There has been nothing handier turned out in the way of a map, so far as I have been able to discover,’ said Philetus A. Clark 2818 Marquita street, ‘than the E-Z guide map of Los Angeles, which is gotten out by the German-American Trust and Savings bank, Spring and Seventh street. This map with its patent indicator shows at a glance the location of every street, park, public square, also the banks, apartment houses, depots, railway offices, theaters, stores and other places of interest. It is indeed a boon to travelers, especially strangers in a strange city, to have something reliable at hand to enable them to get about in pursuit of their business or pleasure with a minimum of effort and worry.’

The main, circular map of Los Angeles - oriented to the north - uses a cleverly-graded rotating indicator to help the perplexed traveler find specific streets, by referring to an index on the verso, pointing the indicator at the relevant number, and then looking up the letter listed along its length. The map also shows railway lines, streetcar and interurban lines, and automobile roads. Neighborhoods are also named on the map, including Arlington Heights, Pico Heights, and Hollywood. Outside the circular city map, a regional map (this time oriented to the east) shows Los Angeles in relation to San Pedro, Pasadena, Pomona, and San Bernardino.

This map was printed in 1915 by Fred B. Bain Inc. as a promotion for the German-American Trust and Savings Bank. In March 1917 the bank applied to change its name to ‘Guaranty Trust and Savings Bank.’ The only other example of this map we have found with the 1915 copyright, in the David Rumsey collection, uses the new name and thus cannot have been printed until some point in 1917. Further examples of a map with this same title, copyrighted 1924, were produced by Bain for the Security Trust and Savings Bank; these were completely revised maps and should not be considered the same as the 1915 map. OCLC only lists the Rumsey copy: there are no examples of this true 1915 example of the map in any institutional collection.

Fred Barned Bain (14 March 14, 1880 - November 17 1968) was an American advertiser and businessman based in San Francisco. He was born in New York City, the son of a grocer; the family moved to Alameda shortly thereafter, appearing there in voting records in 1890. By 1910 he had a young family of his own in Oakland, and was working as a sales agent for a manufacturing firm. He did not stay an employee for long: by 1915 he had struck out on his own with an advertising business. Alhough want ads for his company called for salesmen to handle 'a high-class line of advertising calendars and novelties,' surviving products from his company appear to be predominantly maps. In particular, his series of 'E-Z guide' maps seem to have been successful. Bain produced maps mostly of regional California, and city plans. OCLC shows maps of Oakland, San Francisco, Los Angeles and San Diego; Portland, Oregon; and Seattle, Washington. His customers, overwhelmingly, were banks who used Bain's maps as promotional tools. Learn More...

Average condition. Wear at corners and some splitting at folds, wear at junctures of folds. Indicator intact.