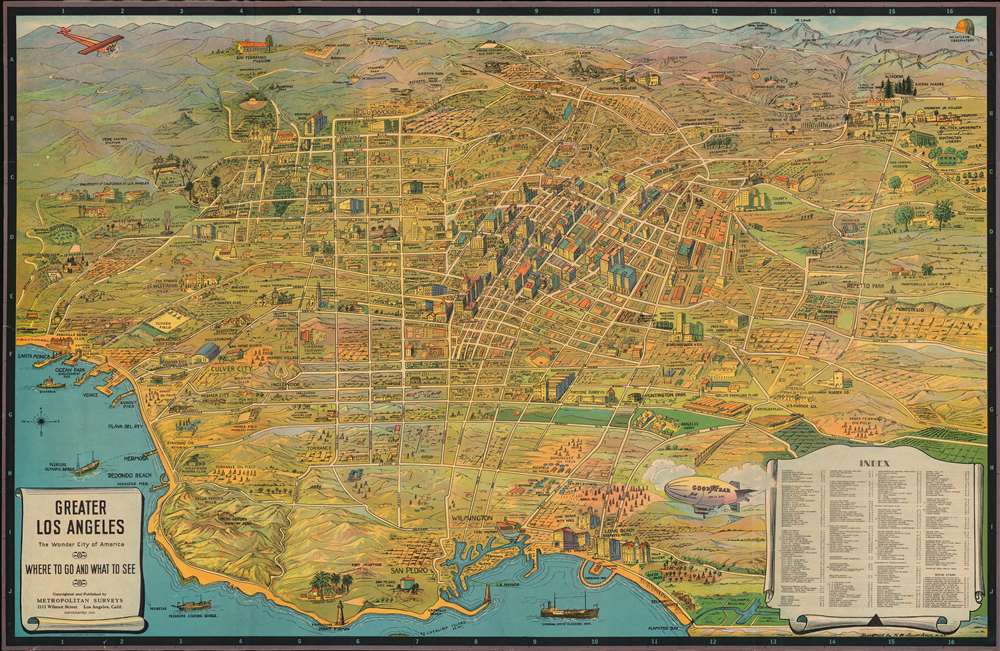 A fine example of K. M. Leuschner's rare 1932 pictorial bird's-eye view of Los Angeles. This is one of the view golden age pictorial maps to depict Los Angeles and is considered something of a holy grail among collectors. The view looks on Los Angles from the south, from a fictional high point somewhere above Santa Catalina Islands. The golden color palette underscores Leuschner's reputation as a master of color balance while also reflecting the legendary southern California sunshine. Despite the reality of Los Angeles and the United States, as a whole, being mired in the Great Depression, this map presents a glowing youthful image, suggesting prosperity and not a little Hollywood glam. And, indeed, despite the dark times, Los Angeles continued to grow throughout the Depression years.

The piece, while offering only a general approximation of geographical accuracy, is notable for its focus odd-ball locations and little-known sites, reflecting the author's own eccentric interests. Indeed, although in this very year Los Angeles hosted the Olympics, the Olympic Village, Stadiums, and Auditorium are only minimally identified.

An extensive index in the lower right names hundreds of important sites, including the homes of no less than 17 Golden Age movie stars ranging from John Barrymore, to Charlie Chaplin, Greta Garbo, Buster Keaton, and Will Rogers. Other nod to Hollywood, is Fox Studio at Westwood Hills. In addition, several local curiosities are noted, including the Electric Fountain at the corner of Santa Monica and Wiltshire, likely constructed in 1931 as Leuschner was penning this map. The University of California in illustrated with great prominence.

This pictorial view was drawn by Karl Moritz Leuschner and published in 1932 by Metropolitan Surveys. It was printed by the Western Lithographic Company, Los Angeles. We note examples at the Library of Congress and the University of California, Berkeley. Scarce to the market.

Karl Moritz Leuschner (August 22, 1878 - May 30, 1940) was a German-American illustrator, lithographer, and graphic designer. Leuschner was born in Berlin, Germany. He left Germany in 1906, emigrating to the United States on November 12, 1907. He lived briefly in Rhode Island before moving to Rochester, New York. There he made a living teaching and selling his art. He moved to Los Angeles, California, in 1926, remaining there through 1936. He put himself through the University of California, earning a Master of Fine Arts degree while working locally as a graphic artist for various lithography firms. He also thought art at several high schools. In cartographic circles he is best known for a large 1932 pictorial map of Los Angeles. Leuschner died in San Francisco in 1940. Learn More...


Western Lithograph Company (1899 - 1953) was a long-lived lithographic printing firm active in Los Angeles and later San Francisco, from roughly the turn of the century. The firm was founded in 1899 by Anton Ernest Stoetzer (1860 - 1909). By 1900, they were one of two lithographic firms operating in Los Angeles, their primary competitor being the Los Angeles Lithographic Company. A management stir occurred in 1906, when the firm was purchased by partners William Gilbert and William Alvord Jones (1863 - 1924), who renamed it the 'Gilbert-Jones-Rugg Company' - exactly who 'Rugg' is remains unknown. An announcement that 'Gilbert-Jones-Rugg' was taking over the business of Western Lithograph Company appeared in the August 1906 issue of American Stationer. Imprints under this name appear in 1907. In 1908, Jones sold his interest to Milton L . Davidson - apparently in exchange for a Montana ranch. Stoetzer died in 1909. By 1910, Davidson returned the company to the original 'Western Lithograph' imprint. An advertisement appears in the September 10, 1910 issue of Los Angeles Financier promoting 'Western Lithograph' as the successor to 'Gilbert-Jones-Rugg.' From their first days, their primary business was to design and print colorful crate labels for California citrus growers. They also bid on general advertising, job printing, posters, and government stamp printing contracts. Western was bought out by Brown-Bigelow in 1953. Learn More...