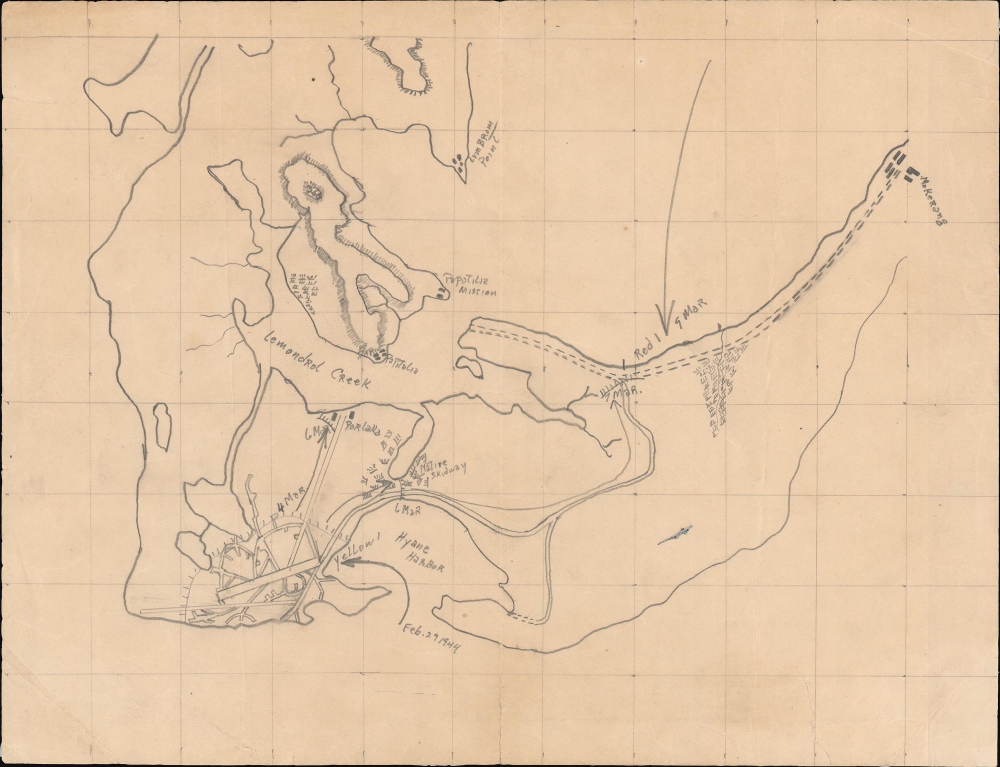 A manuscript map of the Allied invasion of Los Negros, a key step in cutting off the Japanese stronghold at Rabaul during the Pacific War.
$400.00

This is a c. 1944 manuscript map of the Allied invasion of the island of Los Negros in the Admiralty Islands. Oriented towards the east, the map depicts the westernmost portion of Los Negros Island, with Hyane Harbor, the site of the first landing at Los Negros, situated in the bottom third of the sheet. Momote Airfield, though unlabeled, is illustrated in detail along the left side of Hyane Harbor. This airfield, constructed by the Japanese and later expanded by the Americans, was one of the main objectives of the invasion. Troop movements from the airfield are shown by arrows, with dates indicating the speed of their advance.

One of several amphibious assaults that were part of Operation Brewer, which was part of the larger push across the Pacific codenamed Operation Cartwheel, the invasion of Los Negros and the Admiralty Islands was designed to, as General MacArthur stated, 'put the cork in the bottle' of the Japanese stronghold at Rabaul, on the northern tip of the island of New Britain. By 1943 over 110,000 Japanese troops were based at Rabaul. Instead of assaulting such a strongly fortified position, the Allies elected to 'leapfrog' Rabaul and render the base useless by cutting it off from resupply by the Japanese. Los Negros and the Admiralties provided airbases from which the Allies could put increased pressure on Rabaul.

The Invasion of Los Negros

Historians, naval historian Samuel Eliot Morrison in particular, refer to the invasion of Los Negros as 'a gamble'. The decision was taken to invade the island after Allied reconnaissance flights showed that the Momote Airfield had laid dormant for at least a few weeks and that there were not many, if any, signs of Japanese occupation on the island. Thus, MacArthur and the Allies were hoping that the Japanese had deserted Los Negros. Orders were pushed through in the space of less than a week and Allied troops hit the beach at 0817 on February 29, 1944. Unfortunately for those in the invasion force, the Japanese had not completely evacuated Los Negros, so they encountered some resistance. However, the Japanese defenders had believed that if any landings were to happen at Los Negros, they would occur on the other side of the island, along Seeadler Harbor. By March 2, the airfield was secured and had reinforcements arrived with more to come on March 6. Another landing took place near on March 9 on the Seeadler Harbor side of the island. Papitalai, Papitalai Mission, and Lombrum, all of which are labeled here, were part of the expanding operations on Los Negros, with troops arriving at these locations on March 7 and 8.

This map is drawn in manuscript, thus it is likely one of a kind. We have been unable to locate any other similar pieces. Unfortunately, as the piece is unsigned, we have no way of knowing who created this work or where it was created. Curiously, the assaults on Papitalai, Papitalai Mission, and Lombrum are not traced here, unlike the landings on February 29 and March 9. If this piece was meant to be a comprehensive. Summary of the battle for Los Negros, those actions would have been followed as well. Thus, we are at a loss to explain exactly what this piece is depicting.

Good. Manuscript in pencil. Verso repairs to fold separations. Closed margin tears professionally repaired on verso. Blank on verso.
Looking for a high-resolution scan of this?