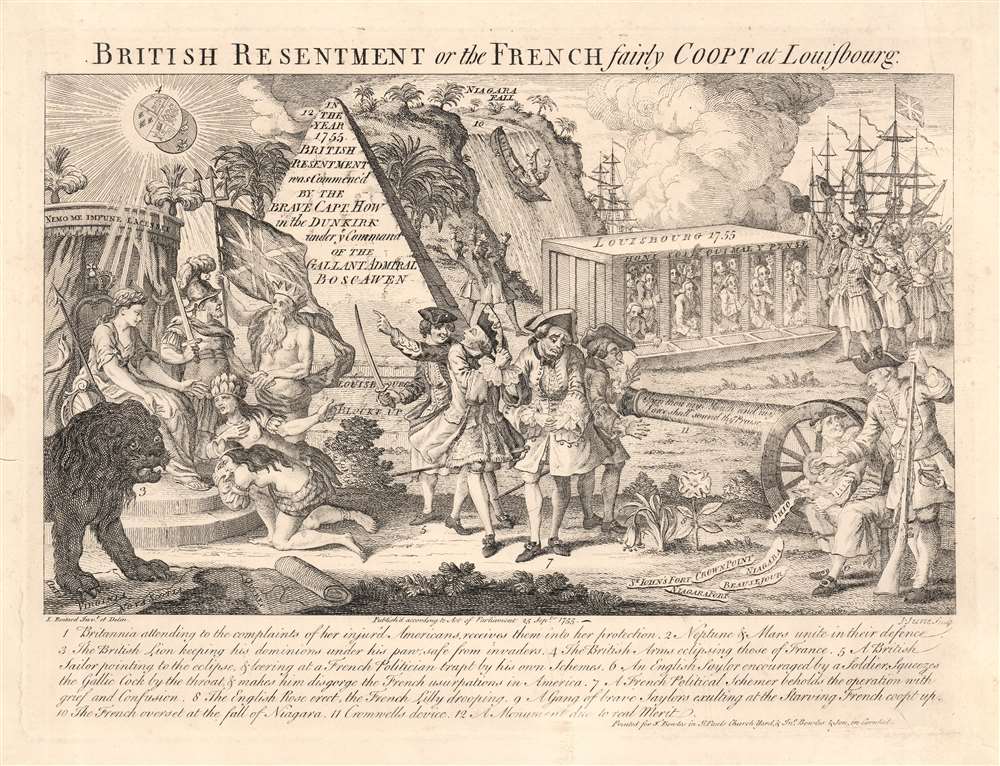 The Fall of French Power in America on the Eve of the Seven Years' War.

This is an English 1755 satirical cartoon celebrating and encouraging the British to take up arms against France in North America, and lampooning France' waning power during the buildup of what would become the French and Indian War (1754 - 1763). The 'resentment of the British', as in the title, refers to British annoyance at French interference in their sphere of influence in the Americas, and French attacks on British Colonists; the Scottish motto above Britannia's throne (Nemo me impune lacessit, no one attacks me with impunity) reiterates the justification for war. But while referencing many points of conflict between the two powers throughout the prospective theatre of war, this work is most specifically in reference to the action of June 8, 1755 - a controversial British naval victory over the French which contributed to the 1756 declaration of war. Hostilities between French and British colonial forces were already underway in 1754 over control of the Ohio River Valley and Nova Scotia, and both Britain and France were rushing troops to reinforce their respective colonial interests. The British Navy sent a fleet (under the command of Vice Admiral Edward Boscawen) to the Gulf of St. Lawrence to intercept French ships en route to Quebec City, but for the most part the French eluded the blockade, landing ships at Louisbourg in Nova Scotia.

Three French ships, under command of Toussaint Hocquart (Dauphin Royal, Alcide, and Lys) became separated from the rest of the fleet in fog. These encountered a trio of Boscawen's ships, HMS Dunkirk (commanded by Richard Howe), HMS Defiance, and HMS Torbay. After some cat-and-mouse in the fog, the ships maneuvered close enough for conversation, despite Admiral Boscawen having already given the signal to engage battle - a red flag, which the French commander had himself seen. Nevertheless, Hocquart called to Howe, 'Are we at war, or at peace?' to which Howe responded in French, 'At peace, at peace.' But according to Hoquart's account (translated by Thomas Pichon),

The conversation was not long. No sooner had I pronounced my name, and the enemy the word peace, but they immediately poured a broad-side into us from their upper and lower tiers, with a discharge of their small arms, which was declaring war. Their guns were charged with cross-bar shot and pieces of brass and old iron. The sea was too calm to lose a single shot, and we were so near to the enemy, that the mouths of their guns touched our ships. This, together with the confidence inspired by the word peace, from the mouth of a captain, made us lose a great many men...

After five hours of battle, Hocquart's Alcide, and the Lys surrendered to the British - but successfully screened the withdrawal of Dauphin Royal - whose captain and crew carried the tale of the battle. In the ensuing controversy, the French saw the action as a dastardly surprise attack; the English took the position that hostilities were already underway, making Hocquart's question ludicrous, especially in the light of his having seen the Admiral's signal to engage. In retrospect, the hostilities were arguably justified: the French ships captured in the engagement were found to be carrying not only eight companies of French soldiers, but also ten thousand scalping knives intended for the Acadians and Mi'kmaq fighting the British in Acadia and Nova Scotia.

The fortress and port of Louisbourg on Cape Breton were established by the French in 1713. In 1745, during the War of the Austrian Succession (1740- 1748), the British had besieged and captured the port. By 1755, it was again in French hands, and represented an unignorable threat to any fleet moving on Quebec, being a key supply port the French: hence, the blockade of the port by Boscawen's fleet. While hardly an airtight seal on the city, the presence of the blockade is in this cartoon portrayed as a monumental, and successful punishment of the French. As a result of the blockade, Louisbourg is said to be 'Blockt up' and its French inhabitants are portrayed as groveling in a chicken coop, enduring the mockery of a crowd of British sailors.

Hoped-For British Successes over the French

The handsomely-engraved but complicated image is accompanied with a helpful descriptive key, which narrates the whole action of the image, and in turn delivers exactly what's 'on the tin.' For example, consider item 6:'An English Saylor encouraged by a Soldier, Squeezes the Gallic Cock by the throat and makes him disgorge the French usurpations in America. Satire in the 18th century was, perhaps, an unsubtle art. Spewing forth from the unhappily abused rooster are the names of areas threatened or held by the French thus freed by the blockade and British arms. For example, the cartoon references the June 16 capture of Fort Beauséjour and the 1755 destruction of 'St. John's Fort' (probably Fort Menagouèche, the French fort at the mouth of the St. John River, New Brunswick).

Some of these boasts were premature. The French did not begin construction of Fort Carillon (later Ticonderoga) on Crown Point until a month after the engraving of this plate. Ohio remained a theatre of the war throughout the conflict. Fort Niagara remained a French stronghold until its 1759 capture. Niagara Falls are portrayed in the cartoon as a dramatic allegory of French failure in the Americas with a Frenchman in a canoe plummeting over the colossal waterfall.

The Means To The End

In addition to the casus belli enumerated here, the means by which Britain should successfully prosecute the war are also displayed throughout: Britannia, receiving the petition of aggrieved America, is visibly supported by Mars and Neptune, the gods of war and the sea respectively. The cannon menacing the unhappy Frenchmen in the center is emblazoned by Cromwell's motto, reinforcing the correctness of Protestant England's fight against a Catholic France. A forest of British masts fills the background, while throughout the cartoon the action is precipitated by gleeful, unworried British soldiers and sailors.

It was printed by the prolific London publisher John Bowles, but engraved by John June, after a drawing by Louis-Philippe Boitard. The plate is dated September 25, 1755 but we are aware of examples printed as late as 1828.


John June (fl. 1746–1770) was an English engrave and printmaker. The bulk of his work were portraits and book illustrations, frequently on behalf of Robert Sayer; but some of his most interesting surviving works were satirical prints. Some of these were political - such as 'British Resentment or the French fairly Coopt at Louisbourg;' Others, like 'The Lady's Disaster' and 'The Beaux's Disaster' poked fun at the foibles of vanity in fashionable dress of the day. Nothing is known of his early life; He is likely the same John June who wedded Ann Robinson on May 15 1743 at the London's Rainbow Coffee House; if so, June may have been either Huguenot or a nondenominational Protestant : the Rainbow was a popular Huguenot meeting place. The Rainbow, in the Cornhill neighborhood of London, was in amongst booksellers and printers: a good fit. Learn More...


Louis-Philippe Boitard (fl. 1733 - 1758) was a French-born engraver active in London during the middle part of the 18th century. He was born in Paris and relocated to London with his father François Boitard (1670 – 1719), a baroque painter, as a young man. Boitard mastered engraving under the tutelage of Raymond Lafage. His most notable work is the compilation and engraving of 41 plates in total for Joseph Spence's Polymetis. At the time of his death he was based in England. Learn More...

Very good. Few reinforced areas of cracking with no loss.