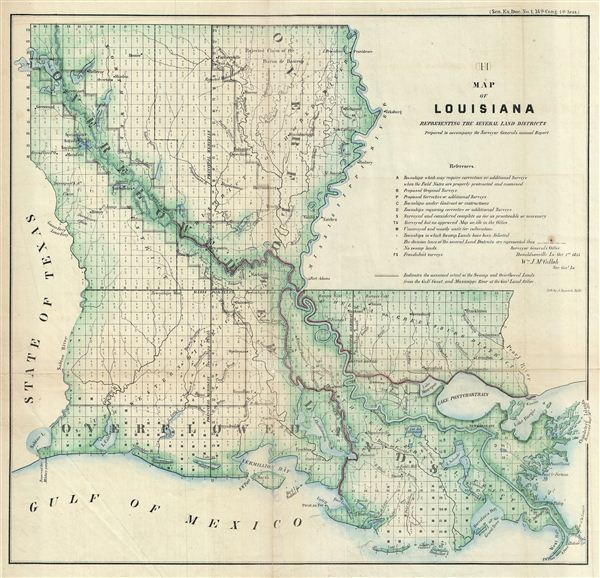 This is an attractive example of the 1855 public survey map of Louisiana prepared by Wm. J. McCulloh, Surveyor General of Louisiana. The map covers the entire state of Louisiana. The state of the Land Survey is also noted via a series of blocks representing the survey grid. A table in the upper right quadrant explains the various markings on the blocks. The map identifies Lake Pontchartrain, New Orleans, Baton Rouge, Barataria Bay, Vermillion Bay and Lake Borgne. Various towns, forts, lakes, rivers and various other topographical details are also included.

In the northeastern part of the state the 'rejected Claims of the Baron de Bastrop' are identified. Bastrop was a curious, nefarious, and dynamic individual who, though largely unknown in history books, played a significant role in this history of America, particularly Texas. Bostrop was born Philip Hendrick Nering Bogel in Dutch Guiana but relocated to Holland as a young map where, with his parents, he settles I Leeuwarden, Friesland. Reaching his maturity, Philip took a post as tax collector for the province. In 1793 he was rightfully prosecuted for stealing the provincial taxes for personal gain. Just one step ahead of the headsman, Philip, now traveling under the assumed name of Felipe enrique Neri, fled to Spanish Louisiana. There through sheer force of charisma he convinced the local settlers that he was a Dutch nobleman fleeing the French invasion of Holland. He fabricated the title 'Baron de Bastrop' and negotiated with the Spanish governor to take control of much of northwestern Louisiana and southern Kentucky in order to found a colony in the Ouachita River Valley. When Louisiana joined the United States Bastrop's claims in this region were rejected and the colony put on hold for lack of funds. Looking for new opportunities he moved to the then Mexican Texas. A chance acquaintance with Moses Austin several years earlier led to Bastrop lobbying successfully for the establishment of the Ango-American Austin colony in Texas. These events later led to the Mexican American War and the annexation of Texas.

This map was engraved by A. Hoen and Company, government printers, in Baltimore, Maryland for issue in the 1856 congressional report, Maps and Views to Accompany Message and Documents 1855-56.