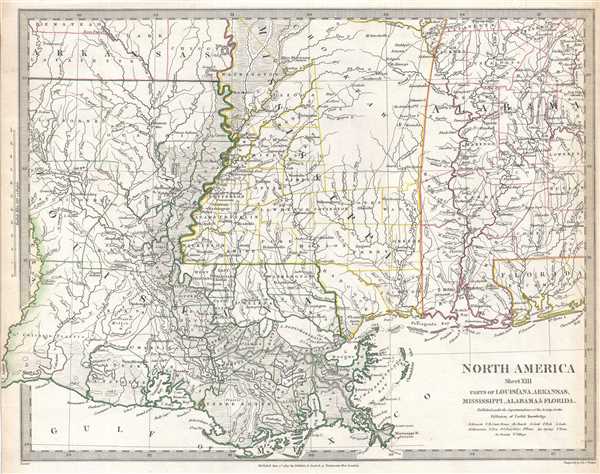 This is an uncommon 1833 Society for the Diffusion of Useful Knowledge or S.D.U.K. map of Mississippi, Louisiana, and Alabama, including a major portion of the states of Louisiana, Mississippi and Alabama, along with parts of Arkansas and Florida. The map depicts the region from Lake Sabine and the Sabine river to Choctawhatchee Bay and from Hempstead Country, Arkansas to the Gulf of Mexico. Numerous cities, towns, and villages throughout the region are labeled, along with rivers, lakes, , and other physical features. Counties within each state are illustrated and labeled. Several Indian tribes, including the Choctaw, are identified.

This map is particularly interesting and important due to its portrayal of the rapidly changing American Indian situation in the northern part Mississippi. In 1827, most of northern Mississippi was a confined territory assigned to the Chickasaw and Choctaw Indian Nations. Within only a few years of this map's publication, the Chickasaw and Choctaw Nations were forcibly relocated westward in the infamous 'Trail of Tears.'

This map was created for the Society for the Diffusion of Useful Knowledge, engraved by the firm of John and Charles Walker, and published by Baldwin and Cradock on June 1, 1833.

Rumsey 0890.140 (atlas edition)
Looking for a high-resolution scan of this?