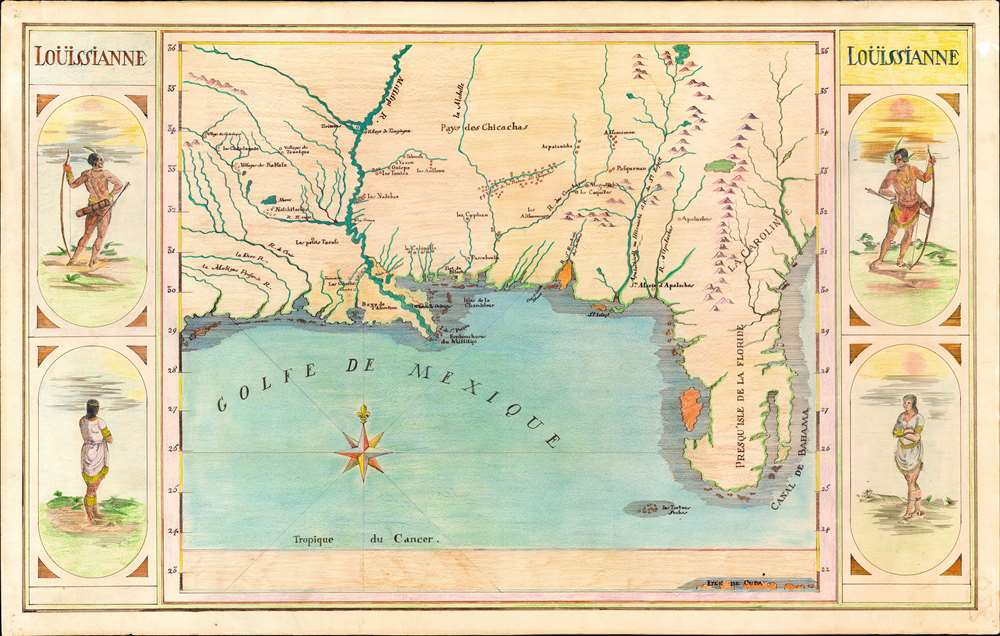 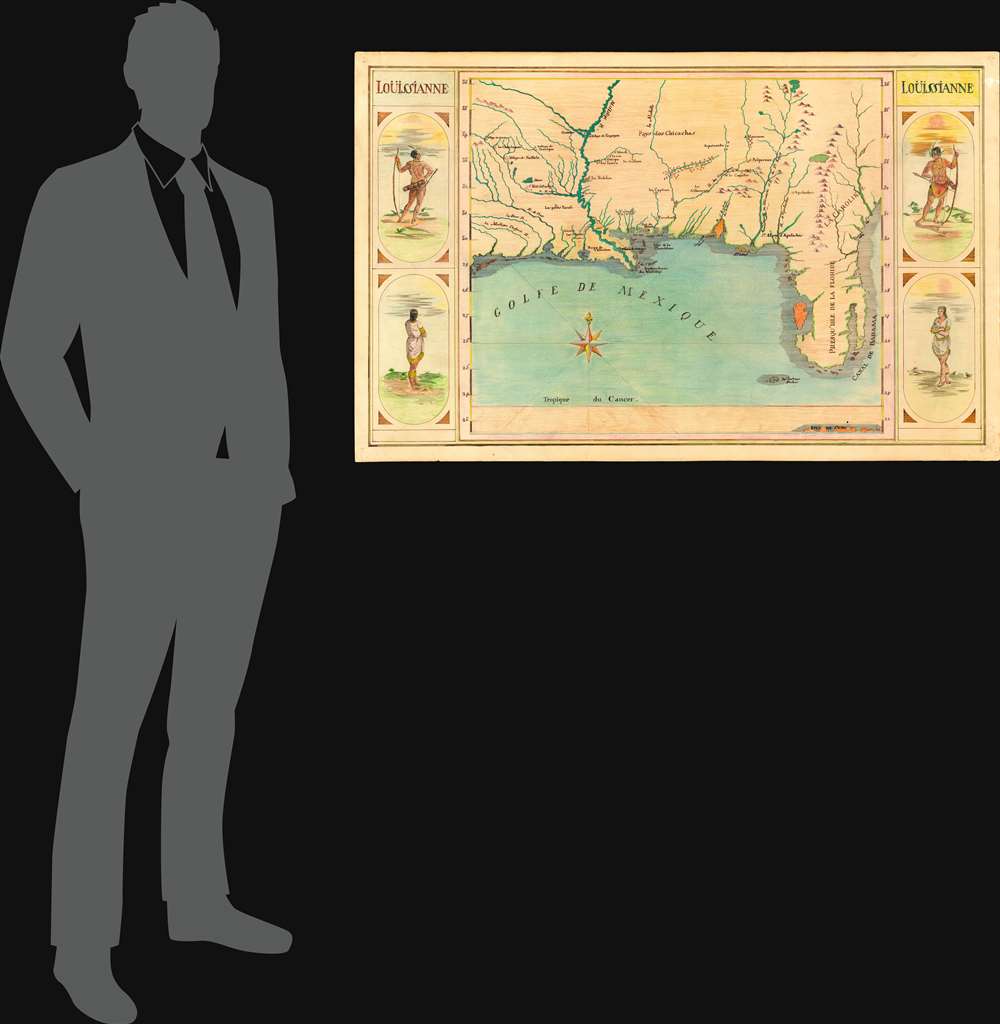 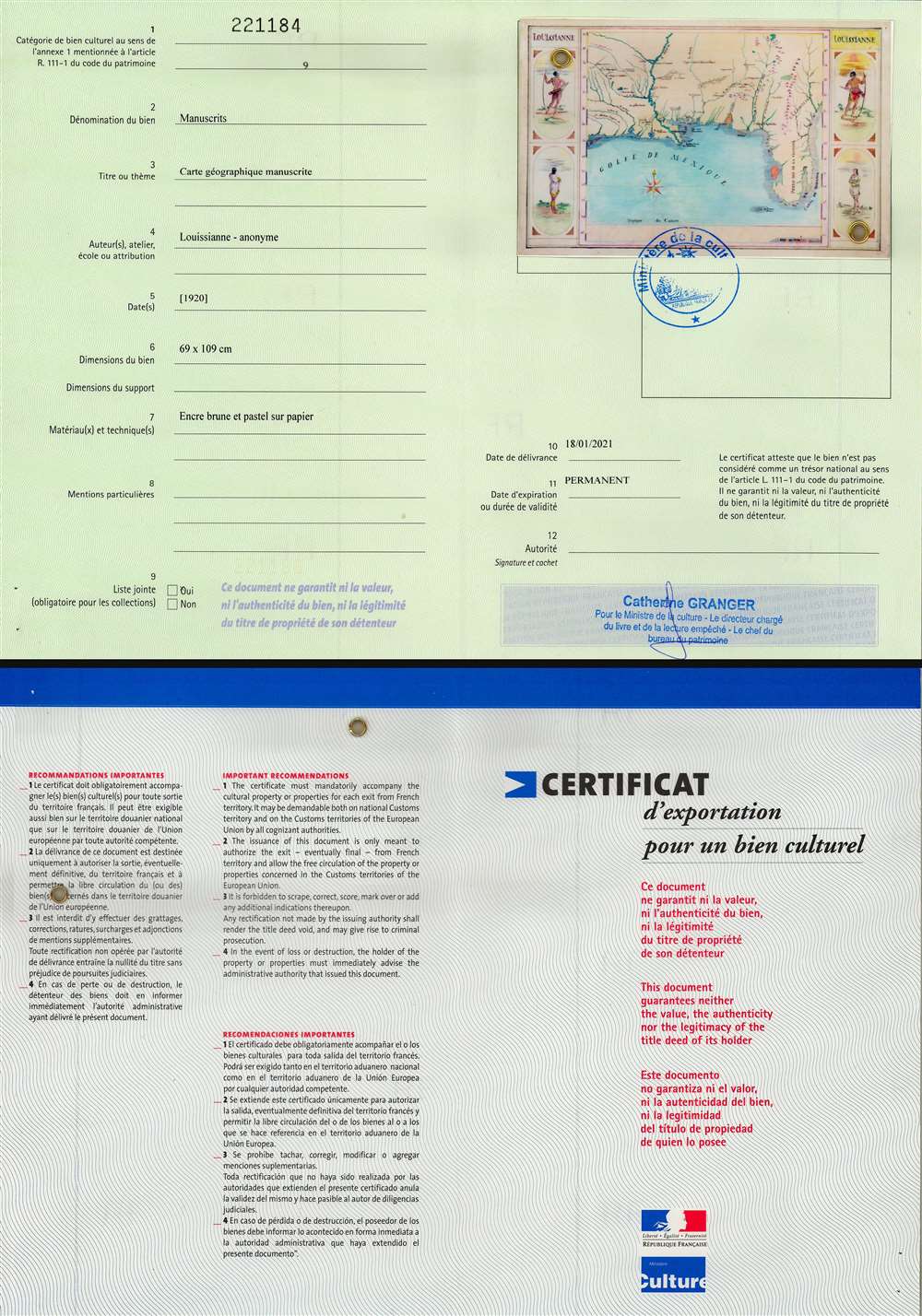 A striking and impressively proportioned cartographic curiosity this is a c. 1920 manuscript map of Florida and the Gulf Littoral as far as Texas. The image is surrounded by front and back-facing images of American Indians. Most likely this is the original art for an unpublished educational poster, as is exhibits a professional level of execution. The map is drawn in ink with color added using what appears to be colored pencil or pastels.

The map is based upon the rare 1715 first edition of Nicolas De Fer's map of the southern part of North America, La Riviere De Missisipi, et ses Environs. This is itself of great curiosity, as the 1715 De Fer is an entirely different map from the more common 1718 De Fer, and surviving examples are known in only 2 or 3 collections. The artist must have had access to one of the few surviving first editions to complete this map. Despite its rarity, the 1715 map is one of the most important early maps of the Mississippi Valley. It is the first map to introduce significant new cartographic information regarding the Lower Mississippi and surrounding areas based on the first-hand accounts of Jesuit Missionaries and other explorers, including Françoise Le Maire, Louis Hennepin (1626 - 1704), René-Robert Cavelier Sieur de La Salle (1643 - 1687), and Louis Jolliet (1645 - 1700), among others. It also offers a unique illustration of Florida including a large island, here colored orange, roughly corresponding to an erroneous connection of Charlotte Harbor and Tampa Bay. On the opposite side of Florida vast inlet attempts to illustrate the inter-coastal waterways and the Key Biscayne / Miami area.

The surrounding images of indigenous American Indians are based upon the illustrations appearing in Theodore De Bry's 1590 collection of travel narratives, America, part of his Les Grands Voyages series. The man with a bow is a lord of the Werowan peoples of Virginia - first encountered and illustrated by John White's account of the first English attempts to colonize Virginia. The woman, also by White, is 'of the Chieff Ladyes of Secota' - however, the present image has the woman more fully dressed than does the original, suggesting that the image was intended for publication in a school setting.

As a manuscript, this map is unique. We have discovered no evidence that it was ever published. The map is accompanied by an official 'Certificat d'Exportation' from the government of France.

Very good. Even toning. Old pinholes in corners.
Looking for a high-resolution scan of this?