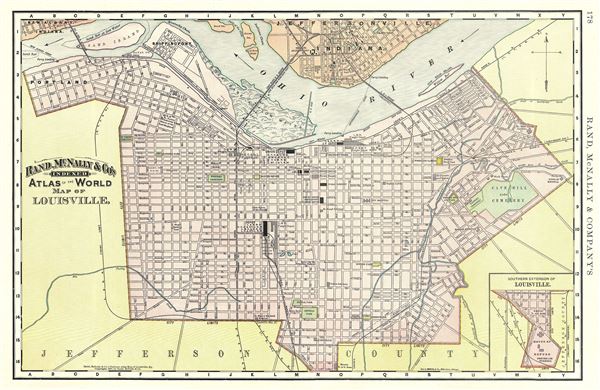 This is a fine example of the 1892 Rand McNally and Company map or plan of the city of Louisville, Kentucky. It cover the city from Portland east as far as Cave Hill Cemetery and from Jeffersonville in Indiana, across the Ohio River south as far as the House of Refuge. A small inset map in the lower right quadrant details the southern extension of Louisville. The map is highly detailed and notes parks, cemeteries, railway and ferry lines, and other topographical features. Individual streets and buildings are identified, including the Court House, Public Library, City Hall, Jail, etc. This map was issued as plate no. 178 in the 1893 edition of Rand McNally and Company's Indexed Atlas of the World- possibly the finest atlas Rand McNally ever issued.