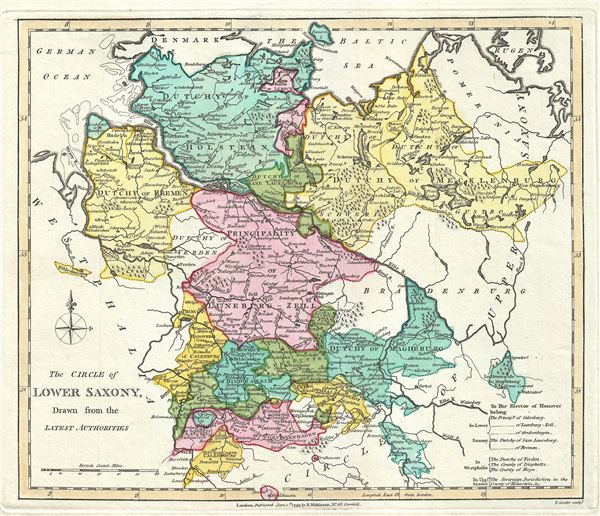 A finely detailed 1793 map of Lower Saxony in what is now north central Germany, by Robert Wilkinson. As shown here, Lower Saxony was bordered by Denmark and the Baltic Sea to the north, Westphalia to the west, Pomerania to the Northeast, and the Circle of Upper Saxony to the south and west. The map offers extraordinary detail, noting numerous towns, cities, rivers, forests, mountains and other topographical features.

Lower Saxony was one of the 'imperial circles' created by the Holy Roman Empire in the 1500s. Groupings of regional territories were designed for defensive, tax, and administrative purposes within the Empire. The Napoleonic Wars would, of course, dissolve the Holy Roman Empire and lead to the consolidation of Germany in 1871. During the French Revolutionary Wars, the Hanoverian Duke and British King George III allied with the Prussians against Napoleon, which nonetheless did not prevent the French ruler from briefly invading and occupying the territory.

An attractive and historically important map for both collectors and researchers, 'The Circle of Lower Saxony' is a great companion map to Wilkinson's 'Germany,' 'The Circle of Upper Saxony,' and 'The Circle of Westphalia,' all from the same atlas. This map was engraved by Thomas Conder and issued as plate no. 17 in the 1792 edition of Robert Wilkinson's General Atlas.