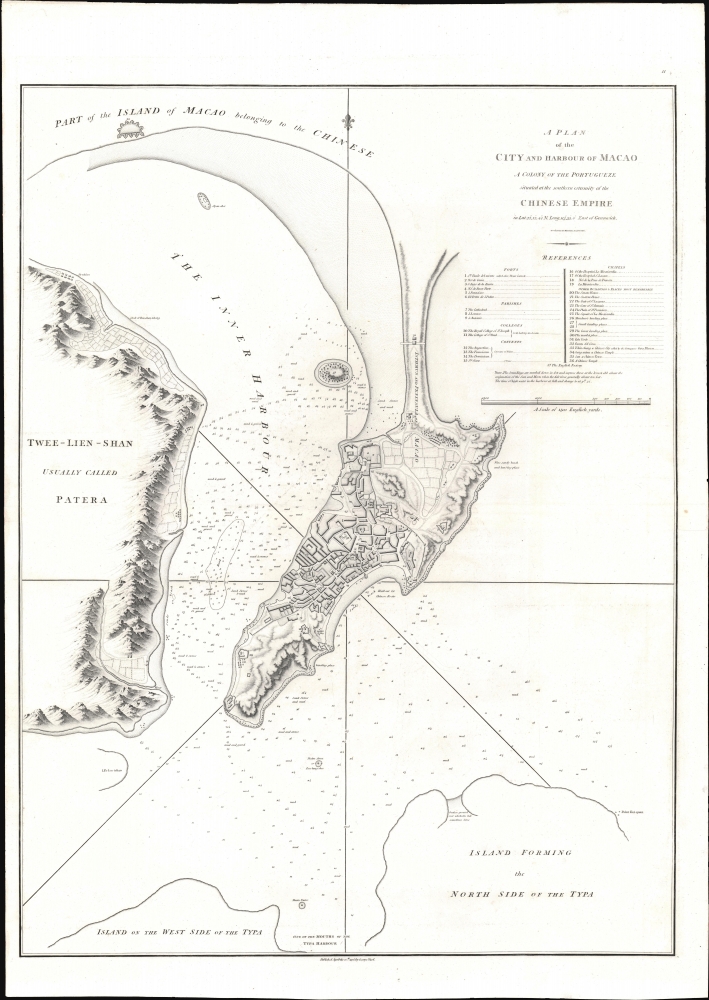 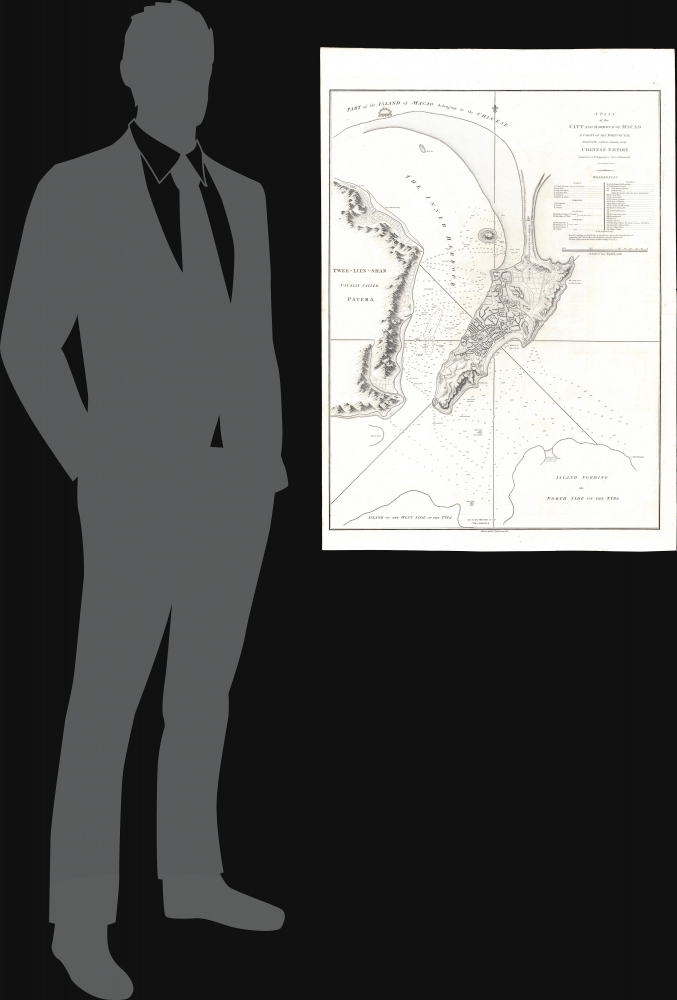 A stunning large-format 1796 nautical chart and city map of Macao, its harbor, and the surrounding seas. This map was drawn by Benjamin Baker based on observations collected by the George Macartney Embassy - the first British embassy to China. The map is impressively proportioned and finely engraved, offering meticulous detail of Portugal's primary entrepôt in China. This map is considered the largest and finest 18th century map of Macao obtainable.

George Macartney was dispatched to Beijing in 1792 with a mission from King George III to convince the Chinese Emperor Qianlong to ease restrictions on trade between Great Britain and China and to allow the British to have a permanent embassy. The well-equipped and impressive embassy traveled via Madeira, Tenerife, Rio de Janeiro, the Cape of Good Hope, Indonesia, and Macau. Macartney was accompanied by George Leonard Staunton (1737 - 1801) who served as the expedition's secretary and chronicler, and Staunton's 11-year-old son, nominally the ambassador's page, but also the only person in the retinue able to speak Mandarin. The Embassy was poorly managed from the beginning and despite considerable pomp from the English perspective, appeared poor and rag-tag to the Qianlong Emperor. Partly through lack of preparation, partly through arrogance, and partly due to the Emperor's distaste for the British, the Embassy failed in all of its primary objectives. They did accomplish some reconnaissance bringing to England some of the earliest first-hand accounts of the distant empire. While much has been made of Macartney's refusal to kowtow to the emperor, the failure of the mission might equally be laid to the Chinese Emperor's insistence - in a subsequent letter to King George III - in referring to all Europeans as 'barbarians', all nations of the earth as being subordinate to China, and addressing the king himself as a Chinese subject, abjuring him to 'Tremblingly obey and show no negligence!'

Macao, or Macau, is a former colony of the Portuguese Empire established in 1557 as a trade entrepôt with Ming China. Macau reached its peak of prosperity in the late 16th and early 17th centuries, transforming from a small trading center into a major city. When the Qing conquered China in 1644, foreign maritime trade was banned, leaving Macao as the only access point for foreign trade into China. Later regulations were loosened, and the Canton system reinstated, but all foreign ships were required to first top at Macau before proceeding to Guangzhou / Canton. Following the First Opium War (1839 - 1842) and the establishment of Hong Kong (1841) as a British Crown Colony, Macau lost its role as a major port and entered into a long period of decline. Portugal paid an annual rent and administered the territory under Chinese sovereignty until 1887, when it gained perpetual colonial rights in the Sino-Portuguese Treaty of Peking. The colony remained under Portuguese rule until 1999, when it was transferred to China. Today, like nearby Hong Kong, Macau is considered a special administrative region of the People's Republic of China.

The map was drawn by Benjamin Baker and published by George Nicol to illustrate George Leonard Staunton's An authentic account of an embassy from the King of Great Britain to the Emperor of China. The map is rare to the market, but well represented institutionally.

George Nicol (1740 - June 25, 1828) was a Scottish bookseller and publisher active in in 18th-century London. Nicol was born in Scotland, but relocated to London in 1769 to work with his uncle, the Strand bookseller David Wilson (17?? - 1777). The two eventually became full business partners, enjoying immense success. When Wilson died in 1777, Nichol took over the business in full. In 1781, Nicol was appointed official bookseller to King George III, a position he maintained until 1820. In 1787 he relocated to Pall Mall, acquiring 51 and 58 Pall Mall, one as a shop and the other as living quarters. Around 1800, his son George Nicol joined the firm, and it was renamed George and William Nicol. When the elder Nichol died in 1828, the firm continued as William Nicol until 1855. Learn More...


Benjamin Baker (1766 - June 29, 1841) was British engraver active in the late 18th and early 19th centuries. Baker was born in London, the son of instrument maker Edward Baker (1730 - 1797). As a young map he was apprenticed to Thomas Beresford, a watchmaker. This likely did not work out, as he was turned over to the engraver, mapmaker, and globemaker William Palmer (1739 - 1812). Baker rose to prominence as an engraver for the British Admiralty and British Ordnance Survey. In time he became the principal engraver for the Ordnance Survey, not only engraving himself, but overseeing the entire team of Ordnance engravers. His son, Benjamin Richard Baker (1792 - 1876) was also a mapmaker, engraver, draughtsman, lithographer, and printer. Learn More...

Staunton, G., An Authentic Account of an Embassy from the King of Great Britain to the Emperor of China, (London) 1797.