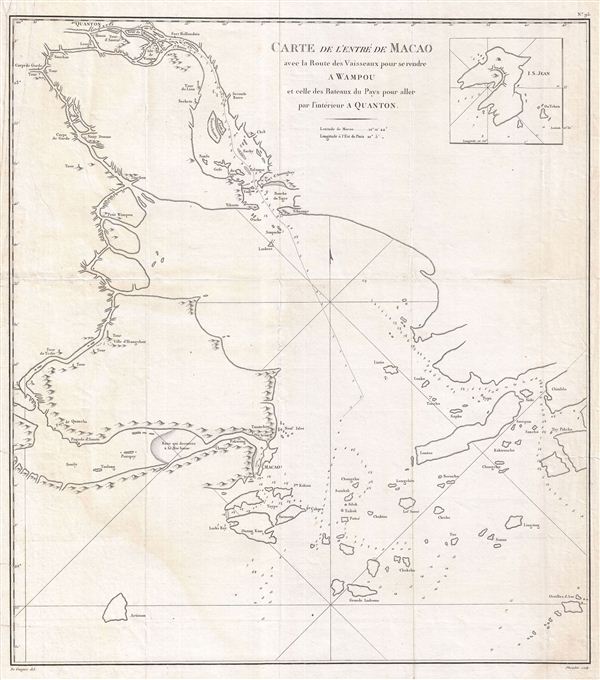 An extremely scarce and obscure 1808 map of Macao, Canton, Lantau, and parts of Hong Kong by Chretien-Louis-Joseph de Guignes. This map is the most important of five charts prepared to illustrate de Guignes's 1808 Voyages a Peking, Manille et l'Île de France, faits dans l'Intervalle des Annees 1784 à 1801. The map covers the Zhujiang River estuary from Macao (Macau) eastwards to Hong Kong and northwards as far as Canton (Guangzhou). Hong Kong Island and neighboring Lamma are themselves not labeled, though several of the surrounding Islands are, as is Chinsalo (Tin Shui) and Dadongwan ( Lingting), among others. The map is primarily a nautical chart and features numerous depth soundings throughout. An inset in the upper right quadrant details Shangchuan Island, a part of the Chuanshan Archipelago. This map was drawn by Chretien-Louis-Joseph de Guignes and engraved by Dhoudan. This map extremely scarce with few examples appearing on the market. In the last 30 years of market history, we have identified no separate examples and only one instance of Guignes' complete 1808 work.

Chretien-Louis-Joseph de Guignes (1758-1845) was a French scholar, orientalist, ambassador, and merchant active around the turn of the 19th century. Chretien-Louis-Joseph was the son of the prominent French orientalist and Sinologue, Joseph de Guignes, a well-known proponent of the theory that Chinese colonists in the 5th century AD established a settlement, called Fusang, in modern day Mexico. Chretien spoke fluent Chinese, a legacy of his father, and in 1774 was assigned to the post of French Consul in Canton (modern day Guangzhou), where he spent 17 years. As one of the few Europeans in Canton fluent in Chinese, de Guignes was hired as an interpreter for the Dutchman Isaac Titsingh on his 1794-95 embassy to the court of the Qianlong Emperor in Beijing. The embassy, known as Titsingh Mission, was invited to attend the 60th year of the emperor's reign and was received at the Yuangmingyuan, or Summer Palace. Unlike the British mission one year earlier, which the Emperor rebuffed for rude and unseemly manners, the Titsingh Mission was feted by the Chinese for its adherence to conventional Chinese court etiquette. Ironically, this turned out to be the last European mission to be welcomed into the Summer Palace, which was destroyed by an Anglo-French army under Lord Elgin in 1860. It was also the last European embassy to appear before the Chinese Court in the context of traditional Imperial Chinese foreign relations. De Guignes returned to Paris in 1801 compiling a history of China and a narrative of his experiences there, including the Titsingh Mission. In 1808, by command of Napoleon, he also began work on a Chinese-Latin-French dictionary, which was published in 1813. The Dictionary proved to be a slur on de Guignes' otherwise distinguished career, turning out to be merely an updated version of a similar 17th century work by the Italian Friar Basilo Brollo. Even so, de Guignes was elected various prestigious institutions, including the Institut de France in the Académie des Sciences (Géographie et Navigation) and of the Académie des Inscriptions et Belles-Lettres. Learn More...

Hong Kong University of Science and Technology Library, G7822.C7 1808 .G85.
Looking for a high-resolution scan of this?